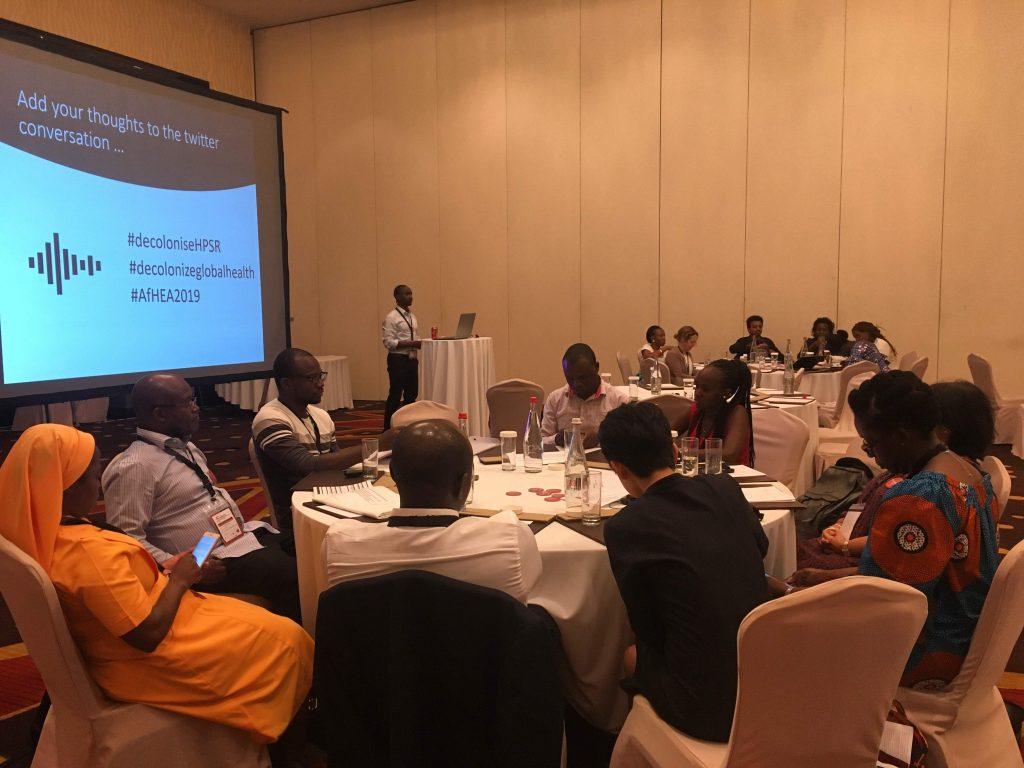 “Another world is not only possible, she is on her way. On a quiet day I can hear her breathing” (Arundhati Roy)

In March 2019 a group of researchers and practitioners met in Accra, Ghana, the first sub-Saharan nation freed from colonial rule, to interrogate what a decolonial lens offers for developing an activist agenda for health policy and systems research (HPSR) on the continent.  This blog shares some of the collective reflections from that session at the Africa Health Economics and Policy Association (AfHEA) 5th Biennial Scientific Conference ahead of the upcoming Health Systems Global Africa Convening, Decolonial thought and African Consciousness for socially just health systems: An imaginative space, supported by the HSG Africa Regional Network, the Atlantic Institute and Tekano.

The Accra Conference formed part of a broader call for HPSR, an applied field that specifically seeks to interrogate power structures to support health systems change, to develop an activist agenda. The call for a paradigm shift in HPSR mirrors recent conversations in Global Health research calling for a new and more critical approach to the complex challenges facing the globe, including pandemics such as COVID-19, the accelerating rate of climate change, and persistent inequality. These changes are required because despite widespread acknowledgement of the political nature of health, Global Health discourse and practice are still largely depoliticized, uncritical and ahistorical. Some have even suggested that Global Health reseach remains a colonial endeavour – in which researchers from high income countries (HIC) are still considered exclusive experts on the complexities of low- and middle-income (LMIC) contexts. Global Health is all too often conducted on LMICs rather than with, or better still, by LMICs. These discussions highlight the danger of approaches that perpetuate the dominance of particular discourses, worldviews and institutions.

Participants at the Accra Conference engaged around key themes: (1) unpacking power: breaking down the mechanisms that maintain unequal power relationships in HPSR research and practice; (2) taking stock of HPSR in Africa: reviewing work that has been done and highlighting gaps; and (3) moving from ideas to action: examining research as activism and the political nature of HPSR. Below, we summarise the discussions from this meeting and analyse their implications.

Power asymmetries manifest in a number of ways, according to the participants. First, who sets the knowledge agenda remains skewed towards HIC researchers. At the most extreme are those taking the so-called “parachute approach” while others involve local researchers only at certain stages e.g. in data collection. Participants raised concerns over tokenistic inclusion of co-authors in publications citing the absence of meaningful involvement in study design, analysis or in developing final outputs. Methodological choices further entrench these asymmetries by promoting an unchallenged dominance of existing methods of scientific inquiry, such as experiments, at the expense of ethics and other approaches to knowledge. This also manifests as prioritisation of certain approaches, such as economic evaluation over health policy implementation lessons.

The second power asymmetry relates to the financing of HPSR with a tendency for budget holding and financial management activities to be performed predominantly by external, usually HIC, entities. Where partnerships between external organisations and local organisations exist, the common theme is lack of support for co-development and ownership of technical and financial proposals sometimes under the guise of limited capacity in the LMIC setting. In addition, funding schemes and cycles seem to favour established organisations that conformed with existing structures.  These power imbalances contribute to the acceptance of tokenistic inclusion in publications or inappropriate research priorities highlighted earlier.

The third power asymmetry refers to local power imbalances that reflect the persistence of colonial norms such as the relationship between the state and its citizens even in moments of crisis. Examples included: poor working conditions that demotivate academics; power asymmetries between elites such as researchers and communities; lack of local institutional support for funding applications; long-standing under-investment in knowledge production; and a dismissal of evidence-informed decision making. Participants noted that pre-colonial African societies also manifest other power asymmetries such as between genders and ethnic groups that are not solely the consequence of colonialism. These asymmetries are also unacceptable and must be addressed.

From ideas to action

Several strategies for action, some of which are already underway, were identified by participants. The first relates to who sets the knowledge agenda. Identification of research priorities by external ‘experts’ reinforces colonial patterns in which local knowledge was disregarded, and colonialists positioned as experts and saviours. The participants reflected on their role within power structures and recognised the need to unlearn framings, discussions and practices that perpetuate assymmetries for example through engaging in more participatory methods to co-define research agendas with community members. This approach will yield priorities that reflect the needs of communities and lead to research and practice that truly interrogates and seeks to disrupt existing power asymmetries.

The second concerns the financing of HPSR, which also influences agenda setting. Participants recognised that the transition to domestic funding of research is necessary but unlikely to be achieved in the short term. Moreover, it might not be sufficient to interrupt the overwhelming asymmetry between HIC and LMIC in their ability to fund research. Participants proposed incremental approaches such as an end to the common practice that the leadership of research in LMIC must be from a HIC institution. Instead, collaborative approaches that centre around respect and mutual learning should be encouraged. Participants also proposed that research grants should include support for co-production of proposals or eliminating barriers to publication. Co-ownership through all the phases of research should also be emphasised e.g. calls that require commitments to equitable sharing of benefits from financial gains from the research. African researchers and institutions should also  address power asymmetries when working with each other given the dynamic nature of dominant and subordinate roles.

We argue that even though the HPSR and Global Health communities are engaging in critical self-reflection, meaningful change requires a reconsideration of the distribution of power in these fields and a radical shifting of the status quo. Decoloniality is a powerful lens through which power imbalances can be understood because interrogating epistemological, power, and cultural imbalances is the basis for any HPSR activist work. A decolonial approach makes these imbalances visible, an important step in the development of alternative approaches that are rooted in critical self-reflection.

The reflections from the session demonstrate an appetite for an activist agenda for HPSR in Africa. This kind of HPSR will reflect the context rather than pursuing an ideal that may lead to versions that value form over substance. This may mean playing a leading role in expanding methods and forms of publications deemed as acceptable, bridging south-south language and power gaps, and creating administrative structures that actively address imbalances. Importantly, this will require unlearning deeply held attitudes, approaches and beliefs to undertake the kind of politically conscious, power-aware, transformative work that HPSR truly requires. An iterative approach will be needed to account for the dynamic nature of dominant and subordinate roles and to avoid replicating oppressive structures and practices at any level.

Lastly, the decolonisation of HPSR will only succeed if it is linked to other struggles against injustices such as inequality and discrimination. Uncritical patterns of discourse and practices are not inescapable, and can be changed through making visible the ways in which these patterns are rooted in structures and institutions that propagate and reinforce them and seek to transform them.

We would like to acknowledge the participants at the Organized session, “An Activist Agenda for Health Policy and Systems (HPS) Research and Practise in Africa”, at the Africa Health Economics and Policy Association (AfHEA) 5th Biennial Scientific Conference. We thank Eleanor Whyle for her review of an earlier draft of this manuscript. We thank Asha George and Lucy Gilson for their helpful comments on subsequent drafts of the manuscript.

The views expressed in this article are those of the authors and do not reflect those of their relevant institutions.

Kenneth Munge has interests in economics of health systems and health policy and works for the World Bank Kenya Country Office. @kenneth_munge

Leanne Brady is a health systems activist and public servant interested in the role the health system can play in building a more equitable society. @BradyLeanne

Salma M Abdalla is interested in foundational causes and determinants of health and the role of policies beyond the healthcare sector in shaping population health. She is the lead Project Director for the Rockefeller Foundation-Boston University Commission on health Determinants, Data, and Decision-making (3-D Commission). @SalmaMHAbdalla