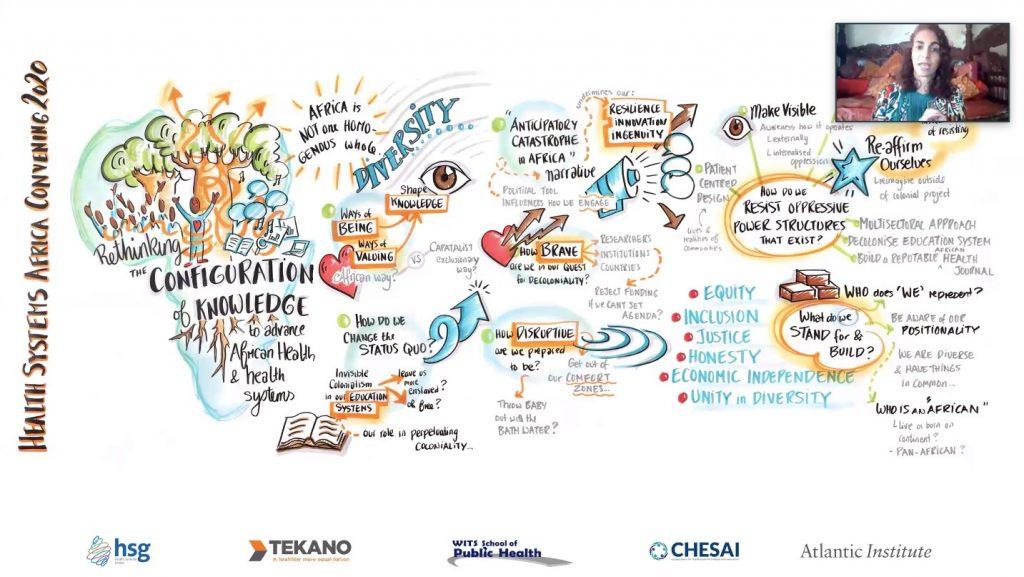 If anyone ever doubts the value of the Emerging Voices for Global Health (EV4GH) programme, they only need to watch the just concluded Africa Convening to be convinced. Two EVs and young rising public health stars, Shehnaz Munshi (EV 2018) and Lance Louskieter (EV 2020), collaborated with Health Systems Global (HSG), the Atlantic Institute, Tekano, CHESAI, and the University of Witwatersrand to launch a stellar, three-day discussion series on “Decolonial thought and African consciousness for socially just health systems”. The online event took place between 30th September and 2nd October, and attracted a high level of interest – over 100 engaged participants on each day of the virtual convening. (Fortunately, the recordings of the Africa Convening will be published soon; follow @AfriDecolHealth for updates).

Scholars, researchers and practitioners from the Health Policy and Systems Research (HPSR) community, from across Africa and beyond, came together to discuss decolonising African health systems. The work built on earlier discussions on decoloniality and HPSR. Keynote speakers, notably Prof. Laetitia Rispel, Dr. Kui Muraya and Tanya Charles, shared insights on aspects of decolonialist and feminist theories. This included intersectionality of gender, race, sexuality, ethnicity and different abilities, along with ethics and power dynamics in the design of health systems and related research in Africa.

What did we agree on?

The Africa Convening was the first organized symposium on HPSR and decoloniality, conducted in, by and for Africa. This was a much needed, because as noted by Ken Munge, Leanne Brady and Salma Abdallah, “Global Health is all too often conducted on LMICs rather than with, or better still, by LMICs.”

The discussions yielded a range of points on how to move the debate forward. First we agreed that there is no such thing as a single or universal “African” culture, society or approach, and that a full definition of the notion of “African” must imperatively take into account the diversity of the continent and its peoples, and therefore the ideas, contexts and perspectives. Other discussion points focused on:

So, what did the convening achieve? Well, a number of things. By bringing together experienced decolonial scholars and HPSR researchers and practitioners, it created a continental platform which facilitated in-depth exploration of the meaning of decolonisation in the context of African HSPR, as well as how to act on this. The convening also contributed to building solidarity and community, ensuring that the outcome would not only be increased use of a decolonial lens by members of the African HPSR community, but a catalysation of the movement towards the decolonisation of HPSR.

As intense as it was, the HSG Africa Convening was only a start to a continental dialogue on de- and re-constructing African models of HPSR. This theme will carry forward to the Sixth Global Symposium on Health Systems Research and future Africa-led discussions to build on the work that was done during the convening, and to develop tools for praxis. While the convening was pan-African, more effort needs to be done to break it out of its current Anglophone-centric focus on South Africa, Kenya and Nigeria. A promising start was already made with active engagement in Francophone West Africa, particularly Benin, Cameroon, and Senegal. Co-leadership in decolonial HPSR thinking from Francophone and Lusophone perspectives (along with Xhosa, Wolof, Swahili and Amharic perspectives?) remains on the horizon.

The issue of praxis – acting on theory – made modest headway in the three days. Drawing from the work of the African Evaluation Association, the southern African concept of ‘ubuntu’ – relatedness, or ‘I am because we are’ – was considered as an analytic criterion. With further elaboration, ubuntu may add to HPSR methods by focusing on relationships among actors and across systems, adding new dimensions to the systems perspective and network analysis. In the format of the convening, poetry, song and yoga were more than artistic fillers for conference breaks in a virtual meeting; rather, they served as a means of experimenting with the practice of a new approach to HPSR. “The Uhadi musical bow and other indigenous instruments” by Lungiswa Plaatjies, poetry by Philippa Kabali Kagwa and guided yoga by Nomzamo and Nosizwe, The Toolbox, provided inspiration for a thoughtful revolt against entrenched norms.

As we look forward to the HSG virtual symposium next month, there are two lessons: (1) Africa just raised the bar on how virtual conferences can be conducted, and HSG has a high standard to meet, and (2) the continent will be watching the HSG speakers to guard against a ‘business as usual’ that ignores the power dynamics that are now recognized as explicitly holding back health systems research in the Global South.

Ravi, can you share the link to the video recordings?