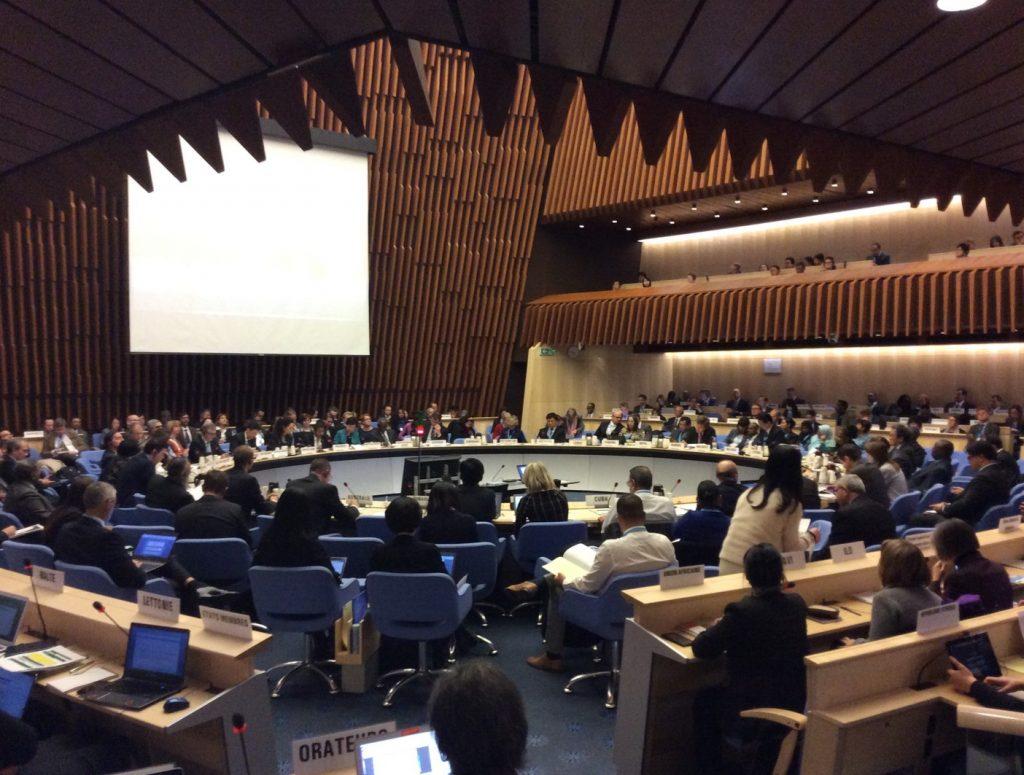 WHA-73 and the Canary in the Coalmine

It’s that time of the year again. Happy European spring days where one would usually see country delegates and the global health crowd gathering at the annual World Health Assembly (WHA) in Geneva. A bit like cows entering a meadow after a year in their stalls. Each year at the WHA, country delegates come together to agree upon some sensitive issues, e.g. in the domain of Anti-Microbial Resistance, or to debate an action plan for NCDs, WHO’s governance reform and (never-ending) funding predicament, … Almost never these become a matter of ‘high politics’. Matters are diplomatically ironed out before they can turn into volatile conflicts between countries.

But how different and unique this year’s WHA (WHA-73) was.  As you no doubt know by now, the Covid-19 pandemic forced WHA-73 to go completely virtual, a unique feature.  Earlier this year, on 1 February 2020, we had a G2H2 session together with Michael Ryan, director of WHO’s health emergencies programme. WHO had just declared the Covid-19 outbreak a PHEIC (Public Health Emergency of International Concern). At the time, despite all concerns, Ryan still had some hope that the epidemic could be contained regionally in Asia. 4 months later, the Covid-19 pandemic has swamped the world. Societies have been hit tremendously hard, directly or indirectly. Almost 5 million cases have been reported globally, including 320.000 deaths. Just yesterday,  the world saw the largest-ever daily increase in new COVID-19 infections, so it’s obvious this will be a long public health battle.  Meanwhile, the economic and humanitarian shockwaves, wreaking havoc in the slipstream of the Covid-19 pandemic and containment measures, have led to enormous needs in many parts of the world. For instance, a study by the UN University estimates that half a billion people, mainly in Africa and Asia, could be pushed into poverty as economies around the world shrink due to the coronavirus outbreak.

Pandemics act like a magnifying glass on existing tensions within and between countries. Covid-19 certainly fits the bill in that respect. The conflict that has erupted between US and China over the main ‘narrative’ of the pandemic (‘who is to be blamed’?) is now partly being played out via the WHO.  Early this week, Donald Trump threatened via Twitter that the US might reconsider its membership of the WHO.  China, on the other hand, announced its full support for the WHO, including a donation of $2billion to the UN, among others to help facilitate the development of Global Public Goods such as disease surveillance, and to provide relief for especially the poorest world nations. The EU led the main WHA resolution on the Covid-19 response, outlining the mechanism for a global pool of Covid-19 technologies, including vaccine development. The WHA resolution also agreed upon an independent review of the international response to the pandemic.

In spite of the (largely positive) outcome, geopolitical tension was thus very much present in the (virtual) Geneva air. This indicates that the hegemony of Transatlantic leadership in global health governance is coming to an end. The Chinese government, via its Belt and Road Initiative (BRI), has slowly but steadily created economic and political dependency relations with nations across the globe. Chinese bilateral and multilateral cooperation on global health security, already present in many Low-and Middle Income countries, will expand considerably.

Going back in time

This unique moment takes me back 10 years ago. At the time, I worked for the Wemos foundation and was involved in policy debates about (what was to become) the Global Code of practice on the International Recruitment of Health Personnel.  Two weeks before the WHA in 2010, the American Aspen institute hosted a policy dialogue, bringing all relevant actors, including country delegates, civil society and international organisations together in order to smoothen out some of the last contentious issues of the global workforce migration code. The US blocked more progressive language on responsibilities, financial compensation and human rights. We were (of course) disappointed as WHO reports on primary health care, human resources for health, social determinants and health systems had provided the policy evidence for more transnational regulatory approaches for labor mobility. Nevertheless, the Obama administration was well-represented in this process, showing constructive leadership. The code was adopted at WHA 63 and the process was considered a success for global health diplomacy . For me it was an entry-point for further research and activism on the role of WHO in global health.

When reflecting on this, I wonder what could have been done different in 2010. At the time, there was hope that institutional change and democratic reform were possible. The HIV/AIDS movement had fought for the recognition of human rights, access to medicines, and there was some expectation that this could be applied to broader global health challenges.  Things turned out differently, though, in the 10 years to follow. The financial crisis led to austerity and deregulation in Europe, and elsewhere. The climate crisis escalated, offshore capital soared, refugees flooded borders (literally), inequalities within and between countries deepened, and democratic recession in nations became the norm rather than the exception. The public-private partnership approach (“The Global Compact”) became the main template for SDG implementation, and philanthropy the preferred solution. The WHO followed suit.  I am frustrated  that all this framing of ‘harnessing’, ‘leveraging’, ‘innovation’, ‘transforming’ , ‘investing’ in health programs, became the priority in many global health collaborations. Basically as some sort of lullaby for the growing neglect and marginalization of “the many” (some call them the “99%”) . I have been naïve in my expectations that these institutional machinations and partnerships in global health institutions, including in WHO, could be transformed from the inside.  In the year 2020, the “multi-stakeholderism” song sounds increasingly false, repetitive and outdated. Like the ‘New Labour’/‘Third Way’ one-hit wonder from the 90s – Tony Blair in a 2020 Zombie outfit. The Rick “Never gonna give you up” Astley of global health.

Time for a new song

And then the novel Coronavirus arrived, wreaking havoc all over the world. To be clear, it did not emerge unexpectedly. Yes, the world was not prepared, but the SARS outbreak in 2003, as well as other zoonotic epidemics such as Ebola and Zika, had been clear warning signs in recent years. There may be a pandemic momentum of hope now, if we look at it from a glass half-full perspective. The momentum may also fail to materialize, though. There are many analyses and campaigns now on how to recover from Covid-19 in a just and ecological manner. I won’t go into that analysis here. At this moment there are, first and foremost, enormous humanitarian needs that require urgent attention. See the recent wake-up call by UN SG Guterres. I have mainly one hope: to not hear this multi-stakeholderism song again! Somehow, this Covid-19 technologies Patent Pool, so much cherished by the EU, still has the sound and feel of it. The devil will be in the governance details, I guess.

The WHO, member states and its global health allies need to come up – together –  (that almost sounds like a global public good, isn’t it ?) with a new, elaborated, polyphone song to address Covid-19 and upcoming global health challenges. Urgently. The song will probably have some Chinese sounds included.  As orchestra director I suggest the guidance from Mia Mottley, Prime minister of the Barbados. Her address to the 73th WHA was amongst the most lucid analyses I came across so far, in the Covid-19 crisis. The plight of the Small- Island Development States (SIDS) is a plight for the planet, for humanity.  SIDS act as sentinels, as canaries in the coalmine. Canaries sing beautifully, by the way.  So the honorable Mottley gets the last word:

“And if we are asking for the same solution for climate, external (economic) shocks as we are now asking for the pandemic, it is because all three destroy our capacity to produce as nations and the ability of our people to survive.”