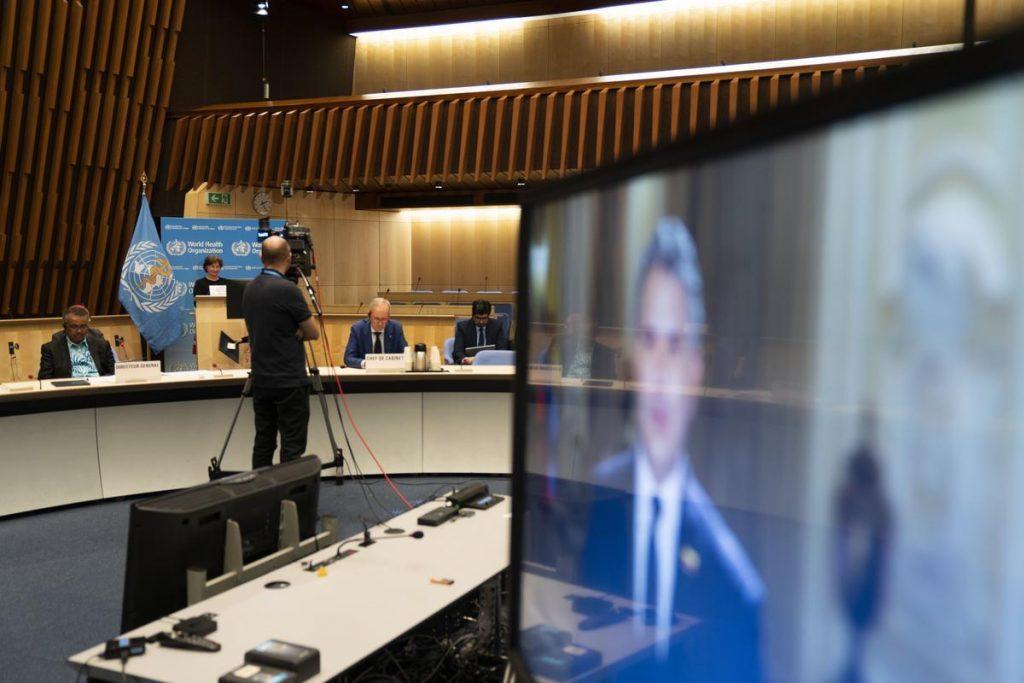 If the world needed proof of international cooperation in the midst of the ever-widening gulfs between increasingly nationalistic democracies, it got one – the first ever virtual World Health Assembly that concluded 19th May. Not only did capitals express solidarity (many, dialling in from cloistered chambers), there was a resounding support for treatments and vaccines as global public goods. Country after country showed up on screens worldwide, some measured, some proud, many humbled. Most of them, had one consistent message – to make treatments and vaccines to fight the pandemic available for all.

This is significant with so many member states speaking with one voice as it were. The coming weeks and months will demonstrate whether different stakeholders, including member states, international organizations, civil society, pharmaceutical companies and scientists can come together to make this happen. The interests are multifarious, so this objective for a “People’s Vaccine” for example, will be pulled in many different directions.

This dynamic of what is at stake, has been best illustrated recently by what many believe is a historic resolution – simply named – COVID-19 response, negotiated for weeks by member states, and adopted by the Assembly in under five minutes, passed without objection. (There were indications on the possibility of the US to reopen a part of the resolution in order to insert language on incentivising innovation. But it did not come to pass.)

It is remarkable that more than 140 member states came together to sponsor the resolution – that agrees for an independent review of the international response to the pandemic; has language that reminds countries that they can use existing legal mechanisms to take decisions in the interest of public health; recognises the role of member states in shaping response to the pandemic, among other key commitments.  (Analyses of the various stages in the negotiation process on this resolution can be read here.)

But those who are at the frontlines of negotiating and operationalising the fundamental issues on ensuring equitable access to drugs, diagnostics and technologies around COVID19, believe that the resolution could have been stronger. The resolution has no mandatory obligations with respect to ensuring access by pooling in patents and information, so that it liberates the means of manufacturing and catalyses distribution at affordable prices.

For example, the resolution says that international organizations and other stakeholders are to “Work collaboratively at all levels to develop, test, and scale-up production of safe, effective, quality, affordable diagnostics, therapeutics, medicines and vaccines for the COVID-19 response, including, existing mechanisms for voluntary pooling and licensing of patents to facilitate timely, equitable and affordable access to them, consistent with the provisions of relevant international treaties including the provisions of the TRIPS agreement and the flexibilities as confirmed by the Doha Declaration on the TRIPS Agreement and Public Health.”

No explicit references have been made in the resolution, on the use of compulsory licenses as a tool in the context of the pandemic ( the resolution only mentions “flexibilities” in the TRIPS agreement).

What is significant to note is that several countries, including developed ones, have not shied away from the possibility of using compulsory licensing in the context of COVID-19 (Israel has in fact gone ahead and issued one.). So even as these legal possibilities are increasingly embraced by richer countries, the resolution does not make a mention of this tool.

A government can issue a compulsory license, effectively allowing a generic version of a drug to be approved even if the branded version continues to be protected under a patent. Compulsory licenses are one of the flexibilities in the WTO’s agreement on intellectual property — the TRIPS (Trade-Related Aspects of Intellectual Property Rights) Agreement. Further, the Doha Declaration on TRIPS and Public Health  confirms that countries have the right to determine what constitutes a national emergency or other circumstances of extreme urgency.

A source said that the resolution did not need to be prescriptive on which of the flexibilities are preferred over others.

While compulsory licenses have been recognized as politically cumbersome and commercially sensitive, the route towards voluntary pooling and licensing of patents has expanded surely and steadily, as also evidenced in this resolution. Voluntary pooling of patents, as prevalent today, is restricted due to their nature of territorial limitations, among other factors, in making drugs available. It can thus not be the preferable path towards equitable access, experts say.

It is understood that the U.S. had for weeks stated its position against the references to TRIPS flexibilities in the resolution. The U.S. wanted the specific language on TRIPS flexibilities to be removed. Later, efforts were made to neutralize the language on flexibilities by assurances on protection and incentivizing innovation. Diplomatic sources said many African countries, and even the EU, were not in favour of such language. However, Australia and Japan were open to siding with the U.S. on adding language on incentivizing innovation, sources said. These efforts were ultimately unsuccessful.  (Ahead of the assembly, African countries had a sent a letter pushing for references to TRIPS flexibilities in the resolution).

Later, the US disassociated with sections of the resolution, stating among other reasons, that the resolution sends “the wrong message to innovators who will be essential to the solutions the whole world needs.” (“We are concerned that a misinterpretation of international trade obligations in non-WTO multilateral fora may negatively affect countries’ abilities to incentivize new drug development and expand access to medicines”, the submitted written statement said.)

Sources say, that legally this may not mean much. Countries can still go ahead and use TRIPS flexibilities to fight the pandemic. The US disassociating itself from a non-binding, but politically significant WHA resolution is not of too much consequence, one diplomatic source from a developing country said.

In the run up to the Assembly, countries spent days negotiating on a number of contentious issues including on whether there should be a reference to global public goods, as described in the UN General Assembly resolution (International cooperation to ensure global access to medicines, vaccines and medical equipment to face COVID-19.) Finally, the language in this resolution was tempered to read as follows, “the role of extensive immunization against COVID-19 as a global public good for health in preventing, containing and stopping transmission in order to bring the pandemic to an end, once safe, quality, efficacious, effective, accessible and affordable vaccines are available..”

Last week, UNAIDS called for a “People’s Vaccine” that is available to all, in all countries, free of charge. The letter, signed by 150 leaders, has called for a global agreement on COVID-19 vaccines, diagnostics and treatments that “Ensures mandatory worldwide sharing of all COVID-19 related knowledge, data and technologies with a pool of COVID-19 licenses freely available to all countries. Countries should be empowered and enabled to make full use of agreed safeguards and flexibilities in the WTO Doha Declaration on the TRIPS Agreement and Public Health to protect access to medicines for all.”

In a variety of statements, numerous countries called for treatments and vaccines for COVID19 to be recognized as global public goods and have pushed for equitable access. From Austria (“future COVID-19 medical treatments and vaccinations as a global public good, accessible to all member states at reasonable prices”) to Timor-Leste (“We appeal to other Member States to treat these as a ‘public good’ and ensure their equitable distribution); from Slovakia (“the international community should make sure it will not be commercialized in the first place”) to Ethiopia (“We call for the removal of all kinds of legal, policy or technical barriers that impede access”); from India (“…the rewards should be available to everyone, regardless of where they have been developed.) to China (“as soon as a Covid-19 vaccine is available in China it will be made a global public good. This will be China’s contribution to ensuring vaccine accessibility and affordability in developing countries.”); and many others had a strong message on equitable access.

The resolution is surely a testimony to solidarity in these hyper-politicised times (when a President of a country can take to twitter to castigate WHO), but the resolution in itself may not do enough to ensure that the goal of equitable access is met swiftly and justly. For that, countries and other powerful actors must walk the talk. And this will be far more difficult than the impassioned, polite calls for solidarity we have witnessed so far.

The Assembly might have been a side-show relative to the larger changes in global health financing, but it indisputably demonstrated the power of diplomacy even in the face of deep geopolitical shifts.

(Please note that there are simultaneous efforts on access discussions within WHO among others on Costa Rica’s proposal for a voluntary tech pool.)

Priti Patnaik is the founding editor of Geneva Health Files, a journalistic initiative that tracks the governance of global health.