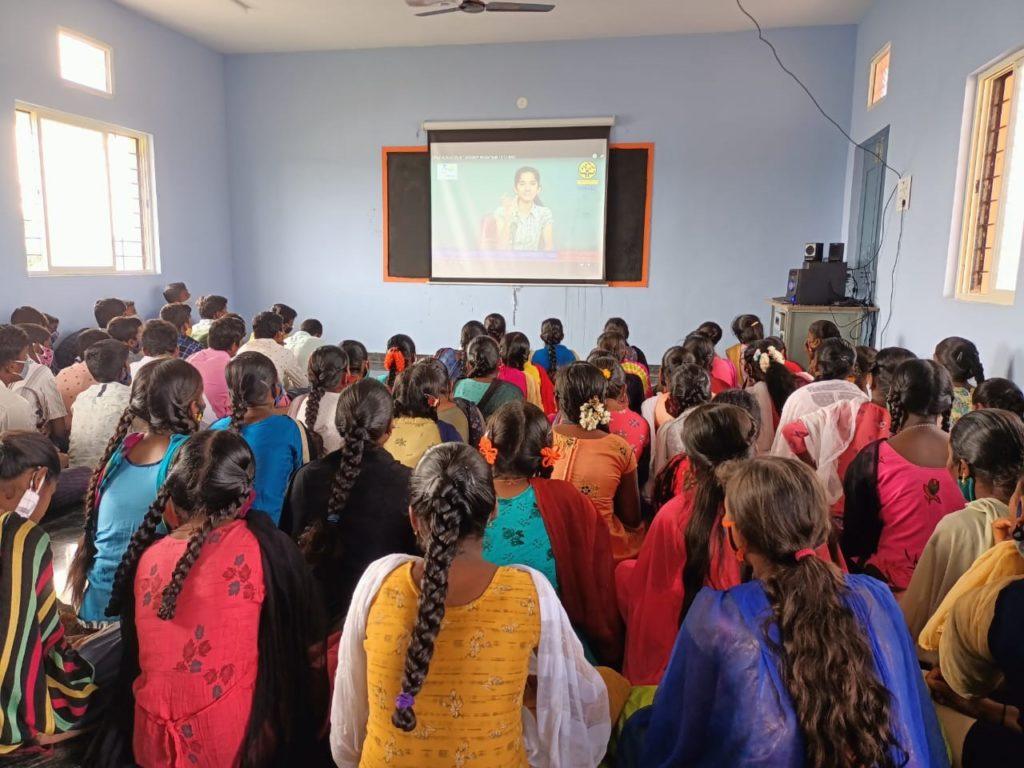 The Karnataka Role Model Girls and The Freedom from Violence Campaign

According to recent estimates  nearly 1 in 3 women aged 15 years and older, face either physical or sexual violence in their lifetime globally. And that was before the Covid pandemic.  Indeed, in the slipstream of the worldwide pandemic, Violence Against Women and Girls (VAWG) sadly also seems to have no boundaries. When I reflect on these dire numbers, my own country, India, almost seems the epicentre of this ‘shadow pandemic’. Even before Covid hit India, various forms of violence against women were already reported “every 3 minutes, every hour, every 6 hours….” and the pandemic has only made things worse. On a more positive note, this is perhaps also the reason why solutions from India can inspire the global cause. In this article we will explore the huge influence that “role model girls” in Karnataka have on their peers in society.

In line with the UNiTE campaign  (the United Nations Secretary-General’s UNiTE by 2030 to End Violence against Women campaign ) and its 16 Days of activism against VAWG, which started on 25 November (the International Day for the Elimination of Violence against Women), I was fortunate to lead a similar campaign in my own country. Entitled ‘Freedom from Violence’ (FFV), and conducted on the back of India’s ‘Azadi Ka Amrit Mahotsav’ celebrations (to mark India’s platinum jubilee celebration of its Independence), the initiative spearheaded by Karnataka’s Rural Development and Panchayat Raj (RDPR) department (a government body in charge of local tiers of governance), the campaign was among others noteworthy for the interpretation of ‘freedom’ or independence that it sought to highlight. Enter the Karnataka role model girls.

Although the southern state of Karnataka is a relatively better off state, it recently topped the country in terms of cases of child marriages (with COVID-induced school closure and poverty raising the rate further). Child marriages, especially in the rural belts are known to provide an enabling environment for VAWG. The FFV campaign was spread over three days, with efforts by the RDPR department to rope in various stakeholders (from the government and non-government ones), to empower and equip school students with an understanding of gender-based violence (GBV), their rights and various laws. In this context, RDPR collaborated with Karnataka Health Promotion Trust (KHPT), a leading NGO in the state (and the organisation I belong to), to steer this campaign across the state.  KHPT has worked for over a decade with adolescent girls, specifically in the northern parts of the state (which have seen some of the highest incidences of violence) through ‘Sphoorthi’, a role model-based life skills education and empowerment program. The Sphoorthi project has worked closely with adolescent girls and their parents, who in turn worked with other adolescent girls to develop their self-esteem, leadership, communication skills, understanding of gender norms, gendered and discriminatory behaviour and practices. The project’s track record augured well with a view on scaling up this campaign across the state.

Using YouTube and a recording studio in Bangalore city provided by the state government, three girls from the Sphoorthi project, Pavitra, Anjali and Rubiya (all aged 19), presented experiential testimonies and strongly spoke out against the existing gender inequity, while championing women’s rights. Through stories, anecdotes and presentations, they shed light on their own experiences and how discriminatory gender practices have been perpetuated through families and society. The various redressal systems like helpline numbers and the role that peer girls can play were brought to the limelight and the positive changes that the girls have seen in the behaviour and attitudes of their community members in recent times were spoken about. Some tools to tackle violence and discrimination against women and girls identified by them were self-esteem, self-confidence and awareness and calling out superstition.

Their confidence and authority resonated in the hearts and minds of schoolchildren who were watching them with rapt attention on their mobile phones and laptops. They became an instant hit as many students from remote areas were able to recall their names and the information they disseminated, even a week after their virtual presence. The reach of the campaign was staggering, with more than 16,000 schools across the entire state and a total number of over 2 million children targeted during the three days, and approximately 1 million students reached.

The connection with the adolescent girls was immediate. “They are from Koppal,” exclaimed one girl in joy, attending the online workshop from her school in rural Koppal, 350 kilometres away from the studio in Bangalore from where the girls were presenting. Explaining what she had learnt from the workshop, she stated, “We also heard that violence can be both intentional and unintentional.” She articulated that “if only girls have to do some domestic work at home, and only boys can get bikes, that is not right! And “They taught us that the colour of the skin does not matter. It is what is inside that makes the balloon fly”.  This last quote referred to a story told by Anjali in which a girl, Megha, goes every year to the village festival. When seeing all the different types of balloons at the stand of a balloon seller, she’s curious to know if the black-coloured balloon can also fly. In the past, she has heard many stories in which it was difficult for dark skinned girls to look beautiful and get married. She innocently asks the balloon seller if the black balloon can also go as high in the sky as the other balloons. To this the balloon seller replies, “a balloon flies due to the air filled inside it and not because of the colour.”. It’s a lovely story.

The role model girls were telling many other good things which make sense such as, “don’t say yes when you want to say no”. When asked about the programme, another 9th standard girl from Koppal district said,  “I want to meet them and talk more about these things.”.

The responses by students interviewed after the workshop from different parts of the state showed the lasting impression the role model girls left on the audiences, and the power of the role model (peer learning) approach. The success and staggering reach of the FFV state-wide campaign showcase the merits of a (scaled up) role model approach and a multi-sectoral effort, especially from government functionaries. The campaign was aligned with the true spirit of the global UNiTE campaign and taught us that this cause and campaign are more than just a “flashy colour”, indeed.