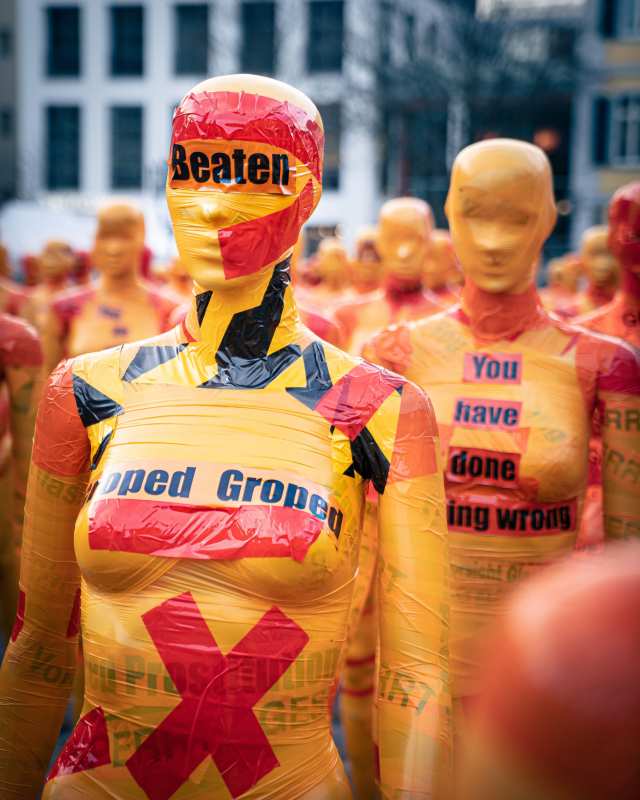 Gender-based violence: we need more than a flashy colour

Today, November 25th, is the first of 16 Days of Activism against Gender-Based Violence. This UN-led campaign ends on December 10th, Human Rights Day, thereby aptly reminding us that violence against women and girls is part and parcel of brutal disrespect for human dignity in general.

Now, most of you might wonder why a yearly campaign for activism against gender-based violence is needed. After all, chances are high that making your Facebook profile ‘orange’ (the colour orange identifying your support for the campaign, as promoted by the UN) is just another click on your keyboard. You might also wear an orange T-shirt and make some noise on the street or in front of a venue where some high-level summit is taking place. All without much risk.

But that is not the case in an increasing number of virtual and real-life spaces and settings. For many of our brothers and sisters, activism has become a death sentence, a major risk factor for imprisonment, or for harassment. It doesn’t even matter what cause they were fighting for, whether it was to end violence against women and girls, to demand justice or democratic elections, or just to protect the environment.

Moreover, things are getting worse. As highlighted by Anne Applebaum in The Atlantic a week ago, The bad guys are winning.In that piece, Sviatlana Tsikhanouskaya – forced out of Belarus after most likely having won the elections there – sums it up wryly: “I am an ordinary person, a housewife, a mother of two children, and I am in politics because other ordinary people are being beaten naked in prison cells”. She has one privilege: she’s still alive. Shifting continents, the IMF yesterday called violence against women in Africa a ‘shadow pandemic’. Adding that, apart from being morally unfair, this pandemic should also be seen as a threat to economic development. It’s the IMF, after all.

Allow me to focus on the region close to my heart. A 2019 Nature Sustainability study documented that a shocking 75% of environmental activists’ deaths registered between 2002 and 2017 took place in Latin America. A 2021 Global Witness report saw that trend only increasing. According to the same publication, Nicaragua, my home country, has turned into the most dangerous country (per capita) for land and environmental activists, followed by its neighbours Honduras, Colombia and Guatemala.

Nicaragua has not only become an unsafe place for environmental activists but also for anyone who dares to question or protest the Ortega-Murillo’s dictatorship (nicknamed OMUR), in power through political manipulation and violence since 2007. To make sure to survive re-election earlier this month, OMUR sent more than 150 activists and opposition leaders to prison. Among them some frail and elderly Sandinista who had helped rescue the same Ortega from jail long before he came to power. Among them are also 10 women, ex-Sandinista and others, some of them part of the LGBT community. You wouldn’t like to stand in their shoes. OMUR’s police force has a track record of systematic gender-based violence against political prisoners. In the least worst-case scenario, this amounts to verbal insults and violence, inquiring about sexual orientation and number of partners. But worse is clearly possible. In his immediate post-election speech, the ‘re-elected’ dictator called the political prisoners “sons of bitches of Yankee imperialism”. For Nicaraguans there can be no misunderstanding: from the lips of the stubborn macho who himself managed to escape conviction for repeatedly abusing his stepdaughter, this is no less than a rape warrant. You will see very few orange T-shirts and Facebook profiles in Nicaragua between today and December 10th.

I wonder if the rest of the world is faring any better. Today, Interpol elected United Arab Emirates security forces general al-Raisi – himself accused of torture – as president. We, women and the rest of mankind, might need more than showing some flashy orange.