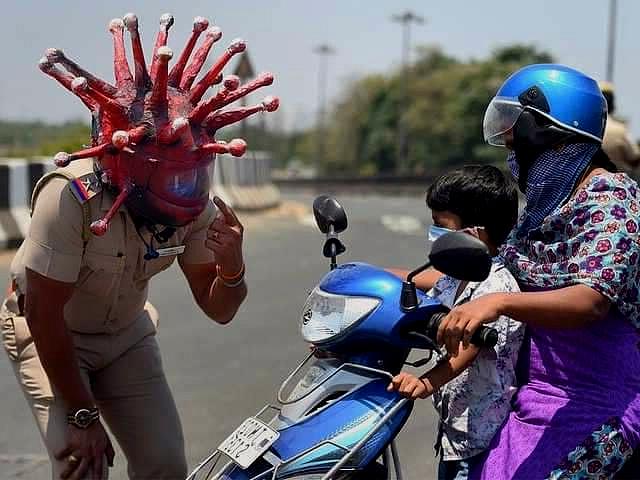 The deepening crisis of the COVID-19 pandemic continues to expose the deficiencies of the current political and economic structures across the world. In the case of India, in particular, it has taken only a few months for the virus to ravage the country’s social fabric and dismantle its economic order rendering millions jobless, incomes and salaries slashed and growth prospects severely contracted. India’s rapid rise in reported cases, from 519 infections and 10 deaths before it entered the lockdown on March 25, 2020 to  20,88,611 infections and 42,518 deaths as of August 8, 2020 point to a critical juncture in the role of the state in relation to human security and health governance. Security threats to individual life, rather than inter-state conflicts, have long been acknowledged to carry political, economic and social ramifications. Further, with global coordination and cooperation efforts being challenged, many states are turning inwards treating the pandemic as an internal security issue. The pandemic paves the way for a more expansive conceptualisation of security, going beyond conventional territorial threats that can be neutralised through the intervention of the forces of the state. The unpredictability of COVID-19 to infect populations and the fears of socio-economic disorder have prompted states across the world, including India, to adopt tough measures.

India’s total lockdown was carried out under the Epidemic Diseases Act, 1897 (EDA) and the Disaster Management Act, 2005 (DMA). The former, a colonial era law first enacted to tackle bubonic plague in Bombay in former British India, empowers the state to take measures to secure public safety and prevent outbreak of any dangerous epidemic disease. The latter, of more recent vintage, mandates the state to set up a three-tier Disaster Management Authority at the national, state and district levels to formulate a comprehensive plan to mitigate threats, focus on preparedness and build capacity in the face of a disaster. This is the first case of the DMA being enforced to address a public health crisis. While the EDA was framed more than half a century before the World Health Organisation (WHO) came into existence, the DMA does not cover any guidelines issued by the WHO and other international organisations to take appropriate measures during the outbreak of a pandemic.

The Indian government’s responses to ensure safety of citizens and the economy, like most countries facing the pandemic, have been a combination of lockdowns to contain the transmission of the virus and economic packages for various sectors of the economy. In framing COVID-19 as a high national security threat, the state has however adopted a security discourse, legitimising its extraordinary measures to effect the lockdown, restrict movement and increase surveillance. In his first public engagement after the announcement of the total lockdown, initially called for 21 days, Prime Minister Narendra Modi likened the situation to the war fought over a span of 18 days in the Hindu epic, The Mahabharata. The national lockdown lasted 68 days, eventually being lifted on May 31, 2020. More recently, the prime minister in an address stated the war against coronavirus must be people-driven calling upon, “Every Indian [to be] a soldier in this fight.”

Another intention behind the securitisation rhetoric is to rally the public’s patriotism, akin to wartimes, in fighting an invisible enemy. Three days before the total lockdown, the Prime Minister’s coronavirus action call exhorted citizens to bang utensils for ten minutes in support of healthcare workers. Two weeks later, on the ninth day of the lockdown, he appealed to citizens to show solidarity by holding candlelight vigils from balconies and rooftops for nine minutes. The spectacles, throwing norms of distance and other precautionary measures to the wind, appealed to vast followers of the regime. However, critics have pointed out to the lack of coordinated state action in providing personal protective equipment (PPE) to healthcare workers and building healthcare capacity to face the surge in cases. Quite tellingly, the vital mandate of the DMA to provide disaster relief and rehabilitation to the populations affected, i.e. the poor and marginalised as well as frontline health-workers has been largely inadequate.

Partial lockdowns continue at the state and district levels with a variety of penal measures. The Jharkhand state government recently passed the Jharkhand Contagious Disease Ordinance 2020 which stipulates a jail term of up to two years and a fine of up to INR 100,000 for flouting guidelines issued to prevent the spread of the infection. The punitive approach to a public health crisis was also seen in the spike in police excesses, especially through the initial phases of the national lockdown, with police brutality for lockdown violations leading to at least 12 deaths.

The idea of press freedom too is vital in a democracy, more especially so during a public health crisis like the COVID-19 pandemic. In June 2020, Rights & Risks Analysis Group, an independent organisation working in the area of human rights violations and fundamental freedoms in India, published a scathing report, India: Media’s Crackdown During COVID19 Lockdown. It stated as many as 55 journalists “faced arrest, registration of FIRs, summons or show cause notices, physical assaults, alleged destruction of properties and threats” for reporting on COVID-19 or “exercising freedom of opinion and expression during the national lockdown between March 25 and May 31, 2020.” Many states issued warnings to press personnel to behave “properly” with the possibility of facing legal action under the DMA for allegedly publishing one-sided stories during the coronavirus outbreak. The Mumbai Police went to the extreme of issuing a gag order under section 144 of Criminal Procedure Code (CrPC) on 23 May 2020 which “prohibit(ed) any person inciting mistrust towards government functionaries and their actions taken in order to prevent spread of the COVID-19 virus and thereby causing danger to human health or safety or a disturbance to the public tranquillity.”

Efforts to counter the pandemic have also led to increased surveillance. Governments at the central and state levels have adopted digital technology and surveillance measures without giving due consideration to the legal framework and India’s social realities. Measures include the Aarogya Setu smartphone app which aids digital contact tracing – informing users of their risk of COVID-19 infection, drones that track people’s movements and facial recognition software which report to the police whether an individual has disregarded quarantine protocols. These measures are being deployed without any transparency or legal safeguards which can lead to abuse of power by the state. In addition, with less than half of India’s population having access to the internet, digital efforts leave out a vast majority of the population, especially the poor and marginalised, such as migrant laborers, exacerbating their difficulties.

Four days after the lockdown took effect leaving citizens stranded without sufficient time to prepare for contingencies the Prime Minister acknowledged the hardships and apologised for the strict measures, “I understand your troubles but there was no other way to wage war against coronavirus… It is a battle of life and death and we have to win it.” Despite the opening of the economy to a certain extent, the Ministry of Home Affairs continues to direct efforts in the “war” against the COVID-19 virus.

The overt securitisation of the pandemic, in a sense, restricts health governance only to states. In order to deal with the pandemic, the state has to adopt a “whole of government”, multi-sectoral approach advocated by the WHO that sees the participation of all stakeholders in the health system- the state, non-state actors as well as the individuals and communities affected. It will also require building a sustainable and resilient health system that ensures health equity, while having the capacity to face the threat of any new pandemic diseases. Restrictive and punitive measures such as lockdowns are limited policy actions to curtail the pandemic. The need of the hour is to extend beyond treating the pandemic as a national security threat and effect legislation that raises India’s health capacity with a potentially long-lasting impact that preserves the health and livelihoods of the entire population.

Lot of focus and light is been given to the COVID-19 that , many other serious health related problems aren’t even taken into the consideration, which is also a issue