Subscribe
Home > Featured Articles > Yes, we have no bananas (but plenty of disasters otherwise) 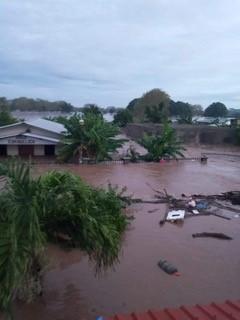 Yes, we have no bananas (but plenty of disasters otherwise)

It had been exactly one year since the last time I was in Honduras. I was honestly glad to enjoy the green landscape as the airplane landed in San Pedro Sula airport. Little did I know that my excitement was going to change into something more ominous, on my way to the hotel where I was about to spend my quarantine. It didn’t take long to notice entire families still camping on the central strip and on both sides of the 10-km road into Honduras’ economic capital.

Oh, Honduras! Of its glorious indigenous past only the lempira, its national currency, is a vague remembrance. Even before business tycoon Sam Zemurray financed a coup d´état in 1912, Honduras had already become the quintessential “banana republic”. Years of military rule and despair made it the bleakest country of Central America by the turn of the 80s (if I may believe Werner Soors, still a student globetrotter at the time). Appearances changed pretty fast when US president Reagan started pouring in massive amounts of money, to compensate for the presence of contra training camps along the Nicaraguan border. By the end of the 80s, Honduras had paved roads and fast-food chains all over. A couple of decades later, the country, home to 17% of the Central Americans, also had 60% of all regional AIDS cases. By 2012, Honduras was the most violent non-war country in the world with 20 murders a day, and San Pedro Sula holding the title of murder capital.

In addition to the violence, a series of climate disruptions shook the country, with hurricanes Eta and Iota as the most recent disasters (November 2020). Four months later, some families are still living in shelters after losing their homes, livelihoods and family members. A recent report indicated that Honduras is one of the countries most affected by extreme weather events between 1998 and 2017 worldwide. Both violence and climate change-related events (drought, hurricanes, floods, etc.) are among the main drivers of the massive migration from the so-called Northern Triangle (El Salvador, Honduras and Guatemala) over the last five years. The last attempt was in January this year, right after the hurricanes and just a few days before Biden took the oath of office as the 46th President of the United States. This latest caravan was made up of approximately 5,000-7,000 Hondurans who decided to flee from poverty and systemic violence, some hoping to reunite with family members already living in the United States.

The Eta and Iota hurricanes worsened the already dire situation of women and children, vulnerable to domestic and sexual violence that further increased due to COVID-19 confinement measures. On top of the violence exerted by maras (gangs), law reforms favour sexual abuse perpetrators by reducing jail time and making it more difficult for victims or their families to access justice. In January, Honduras voted in favour of a constitutional reform designed to prevent the legalization of abortion. Now one of the countries with the most restrictive abortion laws in the world, it is also among the ones with the highest teenage pregnancy rate (around 30% in rural areas). Even the emergency contraceptive pill is prohibited because it is thought to be abortive.

Once again, 2021 won’t be an easy year for Honduras. General elections will be held in November (as is the case in my home country, Nicaragua, south of Honduras). The previous elections turned turbulent in Honduras when claims of electoral fraud resulted in protests and violent repression. In the meantime, COVID vaccination is just getting started but people are not trusting the government nor the vaccine. The next hurricane season is expected soon while recovery from the past season is going slowly.

Still, there is room for hope. Notwithstanding the political polarization and the weak social fabric caused by social violence, I witnessed Hondurans organizing to help their neighbours and other people from most affected areas in the aftermath of the hurricanes, in the absence of an appropriate government response to disasters. Perhaps, after all calamities, things might change for the better after November – a hope I lost long ago for my own country.