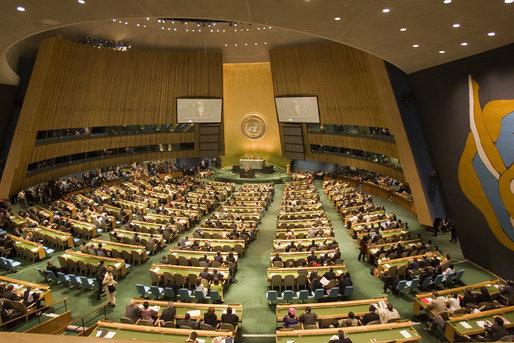 A few weeks ago the near-final political declaration of the UN High level Meeting (UNHLM) on Universal Health Coverage (UHC) became available. The main contentious issues are on language related to sexual and reproductive health, rights and gender equality (par. 68 & 69) and access to health care for migrants, refugees, internally displaced persons and indigenous peoples (par.70 & 71). The UNHLM on UHC, taking place at the United Nations General Assembly (UNGA) on 23 September 2019, is seen as the culmination of a long process to mobilise the ‘highest political support to package the entire health agenda under the umbrella of UHC’.  The Partnership for Universal Health Coverage (UHC2030) has formulated a set of ‘key asks’ based on a series of consultations. And, there was a multi-stakeholder consultation facilitated at the UNGA in April 2019.

Feelings on the “multistakeholder” and partnership approach in advancing the UHC objective that is so pervasive in the entire (Sustainable Development goals) SDG agenda are ‘mixed’, to put it mildly. The question if the high-level political declaration will meet its expectations depends on how these expectations are framed. To answer this question; we need to zoom out and take some steps back in time.

One can distinguish two perspectives. The first perspective is a positive one: Yes, we can! Universal Health Coverage is a political choice and if we mobilize sufficient resources, inter-sectoral collaboration and political capital we’ll move this aim forward. This vision is clearly outlined in the new publication “Health: a political choice” by the Global Governance project in collaboration with WHO. It contains short perspectives on health, UHC and the SDG. Country leaders, UN leaders, civil society, academics and others make the case here for investing in UHC. Amongst others, Ilona Kickbusch puts the focus on the gender dividend and the need to invest in the women health workforce. Jeffrey Sachs proposes a tax for billionaires to close the UHC financial gap in low- income countries. Médecins Sans Frontières activists remind us about the sustained restrictive fiscal space, precipitous economic models and the need for international financial solidarity. Ronald Labonté compares the investment model in UHC (and the broader SDGs) with “a gigantic global version of Franklin Roosevelts New Deal” – basically a Neo-Keynesian model in green growth, decent employment, social protection.

The second perspective is a sobering, critical view of how the global economy has developed over the last decade, building forward on a longer history of economic globalisation. From  this viewpoint, poor countries subsidize the rich ones. For every $1 of aid that developing countries receive, they lose $24 in net outflows. This is mainly due to interest payment on outstanding debt, illicit capital and a phenomenon known as trade misinvoicing. This image does not even include the economic externalities due to environmental degradation and climate breakdown of which the burden is mostly felt in low- and middle-income countries. A comparative analysis in 187 countries by the South Centre and ILO (2015) indicates, in contrast to the fiscal expansive hopes of the SDG, that fiscal contraction is more of a rule than exception. Overall, austerity is expected to impact more than two-thirds of all countries during 2016-20, affecting more than six billion persons or nearly 80 per cent of the global population by 2020. Branko Milanovic researched that global income inequality has increased between 1988 and 2008. He argues that as most of our income is determined by citizenship then here is little equality of opportunity globally.  An analysis by Stubbs and colleagues concluded that economic conditionalities imposed by the World Bank and the International Monetary Fund on indebted nations, impeded progress toward the attainment of UHC in 16 West African Countries in the period from 1995–2014.

So, how to bring these two perspectives together? This is not obvious at all. National governments and all their stakeholders will pledge at the UN to move forward with social health protection in the form of UHC. At the same time global economic drivers (by structures of modern capitalism and financialization) lead to social disruption, fuel (literally) climate breakdown and  increase precarious living conditions for the majority world.

Over the years, civil society organizations have analysed and advocated that the UHC goal can only be achieved when international economic injustices are being dealt with in a structural way. And they are not the only ones.

WHO DG Margaret Chan expressed the need for financial redistribution during the launch of the World health Report 2010 on health systems financing. “Global solidarity is required. Of 49 developing countries, only eight have any chance whatsoever of generating the funds required to reach the health-related Millennium Development Goals from domestic sources alone. External financial support will be needed for some years to come.” A Chatham house report from 2014 recommended a coherent global framework for health financing as a shared responsibilities mechanism for advancing UHC and Global Public Goods for Health.

Unfortunately but not unexpectedly, none of these demands for global financial redistribution and regulation have returned in the draft UHC political declaration. The onus is on expanding domestic financing for health, with an opaque, weak target (“WHO’s recommendation of an additional 1 % of GDP or more”, par.41) included as aspiration. The declaration does not provide commitments regarding shared responsibilities or financing UHC in countries that cannot afford essential health services.

From a global justice perspective, the UNHLM on UHC fails to deliver its potential. The economist Dani Rodrik describes the mechanism behind it in his 2011 book “The Globalization Paradox” in which he outlines an inescapable trilemma of the world economy.  The trilemma says that democracy, national sovereignty and global economic integration are mutually incompatible. One could argue that nowadays a majority of the nation states’ governments are mainly responsive to the needs of the international economy. This is known as the ‘golden straightjacket’.  The SDGs, including the health goal, are positioned within such a global golden straightjacket. Our main expectation for the HLM on UHC is not a proclamation and celebration of the SDG dream that partnerships and global compacts will move UHC closer by 2030. (“And they lived happily ever after”).  Rather, I hope that this could be a moment to look in the mirror and reflect how we, could escape from this economic straightjacket in a democratic, dignified way and with health, ecology and human rights at the core of our hearts, minds and actions.