Subscribe
Home > Featured Articles > UHC in the age of the coronavirus 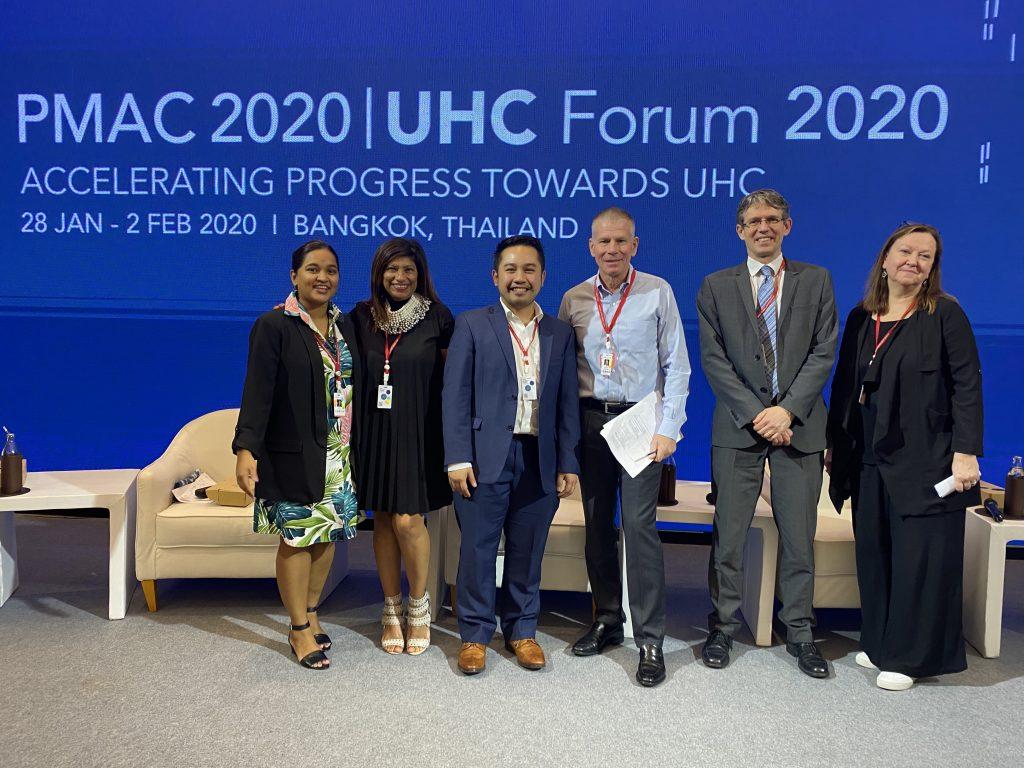 UHC in the age of the coronavirus

Once again the global health community congregated in Bangkok for the annual Prince Mahidol Award Conference (28 Jan-2 Feb). I’ve chronicled my annual pilgrimage a few times before, calling attention to PMAC’s “elephant in the room” (2015) and examining its “political economy” (2019). While I’m still wishing for a future PMAC “planetary health” edition, I was glad to receive an invitation again for now, proof of PMAC’s openness to welcoming critical friends (such as the People’s Health Movement – and this was the first PMAC without David Sanders, whose presence was sorely missed by many).

As this year’s PMAC aimed to “accelerate progress towards UHC,” a novel coronavirus was – and still very much is – accelerating its way from neighboring Wuhan to the rest of the world. Put differently: if there ever was a time that “UHC meets global health security”, it was probably now. Tedros previously described UHC and global health security as “two sides of the same coin”.  The mantra sure sounds catchy, but let’s face it, that is not the case. The two may share many similar inputs – functioning facilities, equipped workforce, and adequate financing, to name a few. However, they hugely diverge in terms of purpose and principles – UHC aspires to make health (or at least healthcare) accessible to all, while the “securitization” of health in actuality connotes security not for all but for one’s kind from others, leading to travel bans, exclusion, and even racism and xenophobia,  already popping up in some countries this past week, as you know.

In the age of the coronavirus, travel with a mask – and a former minister of health! Renzo with Manuel Dayrit, former Philippine Secretary of Health, arriving in Bangkok airport

Dubbed the “UHC Forum,” this year’s PMAC seemed to be the latest and biggest reunion of the UHC community since the high-level meeting held in New York in September last year (the first though when surgical masks have become a fashion statement). Four months after the adoption of the UHC political declaration, there was little progress to celebrate. Exhausted from too many UHC meetings, Khuat Thi Hai Oanh, an NGO leader from Vietnam, suggested in the opening plenary that the next time the UHC community will gather should be when there is already enough progress to talk about.

Nonetheless, one merit of convenings such as PMAC is that this is an opportunity especially for governments to exchange good practices and learn directly from the technical experts. The pre-conference side meetings were particularly educational. The most popular event was the two-day forum organized by WHO. Everyone I bumped into asked me, “Where is the Kutzin session?” Joe Kutzin, WHO’s financing czar, recruited a powerhouse cast to talk about a diverse array of topics from DRGs (diagnosis-related groups) and DLIs (disbursement linked indicators) to public financial management and political economy management. Meanwhile, our session on WASH (water, sanitation, and health) in health facilities – also organized by WHO – struggled to fill a way smaller room. “It’s not a health facility without WASH” was our little group’s consensus. Unfortunately, raising money is seen as much sexier than cleaning toilets.

Renzo and Thai medical students with the UHC umbrella behind

In itself, UHC is a broad umbrella topic – the pun was intended, as the umbrella has become the de facto symbol of UHC (See the UHC 2030 logo). From the stage to the speaker tokens, PMAC was ornamented with umbrellas. Under the UHC umbrella, there is so much to talk about, questions to ask, and issues to resolve. Nevertheless, from my view, these were some of the headlines (What are yours? Share them in the comments section or via Twitter!):

First: the private sector’s role in UHC. While speakers and audience alike reiterated the fact that publicly funded and provided health services are not only cheaper but also more equitable, private sector engagement was a recurrent motif in the conference. For instance, USAID-sponsored sessions presented such engagement as something that is, borrowing from the event titles, achievable through “stronger collaboration” and “smart policy” and by securing “private sector funds for private sector health.” Sessions that touched on digital health also echoed the promise of the private sector as a wellspring of innovation for accelerating UHC achievement. Ministries of health are now urged to master the playbook of “how to get away from being murdered by the private sector.” One speaker declared: “The mixed health system is here to stay. Hence, find a way to make it work before it’s too late.” Governments must learn how to be the conductor of the UHC orchestra, otherwise they might end up being conducted upon instead.

Second: how can UHC financing be made SAFE – a new fancy acronym for “Sustainable, Adequate, Fair, Efficient” ? Kutzin lamented that there is so much noise about “innovations” for raising more money (which many equate to private money) – innovations that bilateral aid agencies and global health think tanks are peddling to needy governments. “Private financing is complementary, but the first priority should be to get public finance right!”, Kutzin reminded us. Not only the financial pool must be safe, but people themselves should feel safe especially at the point of care – “without fear of financial hardship,” says the last part of WHO’s definition of UHC which we often forget. “Co-payments are incompatible with #UHC – they are a tax on the sick!” remarked Chatham House’s Rob Yates. And the ultimate outcome of a SAFE UHC system is not just that the patient leaves the hospital not poorer, but that she goes home much healthier. “Not all who have access may have health gain. It’s not just about coverage but about effective coverage,” summarized Walaiporn Patcharanarumol, Director of Thailand’s world-renowned International Health Policy Program (IHPP), during the closing plenary.

One of the slides from the “Kutzin session”

Third: ensuring UHC is not just about cure but also disease prevention and health promotion. The world needs a lot of reminding on this, as population-based services such as immunization (whose rates are declining) and “common goods for health” (which WHO’s Agnès Soucat called “step zero” of UHC) such as clean air (which continues to worsen) tend to be sidelined, if not ignored, when UHC discussions get stuck in designing hospital-oriented benefit packages (which I would prefer to call “sickness packages”). Iran may have been dominating the headlines these past few weeks for several reasons, but one piece of good news that we don’t often hear about this country is how health promotion is embedded in their national health system. “Health promotion cannot be sustained without a strong network of primary health care,” exhorted Professor Amirhossein Takian from Tehran University of Medical Sciences, who also shared how health issues such as nutrition are tackled at the level of the president under its “Supreme council.” Other mainstay examples – from Thailand’s national health assembly to the Philippines’s sin taxes for UHC – were also showcased, but we need more.

The latter half of PMAC 2020 was a foreboding of the 2021 conference, which will focus on the “megatrends” that will shape UHC and health at large in the 21st century. Thanks to the foresight of the Swedish Institute for Global Health Transformation (SIGHT), we were able to insert one session on climate change. In order to succeed in its goals for health, UHC requires a healthy planet; therefore, the UHC community must embrace climate change as its (own) issue and support climate action. (I’m glad that the gap between climate change and health systems is soon to be closed, as the upcoming 6th Global Symposium on Health Systems Research in Dubai will have a special stream on this nexus.) Other megatrends examined include digitalization, which can be UHC’s bane or boon, and trade agreements, which can restrict access to medicines or further exacerbate the health workforce crisis.

Renzo in the panel on climate change and UHC led by Anders Nordstrom, Swedish Ambassador for Global Health

One megatrend that received little attention in the main conference (although three side meetings touched on this topic) was migration, which is expected to intensify in the era of planetary emergency. The appetite for “migrant inclusive health systems” may continue to decline, however, as more coronaviruses spread and more countries close their borders, if not build walls. Ensuring that migrants are “not left behind” also challenges the term “universal” in UHC – universality in UHC as it is currently interpreted and implemented is based on citizenship and only applies within a country’s territory, rather than being founded on the right to health of every human being and applied beyond national boundaries. Watch out for more megatrends in PMAC 2021!

As expected, the sessions were showered with our favorite mantras such as “There can be no UHC without [insert your issue here] ” and “[Choose between UHC and SDGs] must leave no one behind.” But unless we move beyond these sound bites and start getting our acts together, as the PMAC organizers led by Dr. Suwit and the Japanese karaoke champions sang during the gala, “Que sera sera, UHC is just a fantasy!”

PMAC organizers during the evening gala (aka karaoke night)

Spotlighting the role of courts in health policy processes: The role of the Delhi High Court in COVID-19 policy formulationKey features of an uplifting global health collaboration and work environment: From two mid-career African health experts.Are we really ‘one’ in ‘One Health’?Time to Rethink Global Collaboration: Travel restrictions for global health professionalsEV2022 in Colombia: On keeping Emerging Voices innovative, disruptive and relevant
add a comment
Cancel reply
1 comments

Thanks for the information, It is so helpful since coronavirus is spreading to the countries.