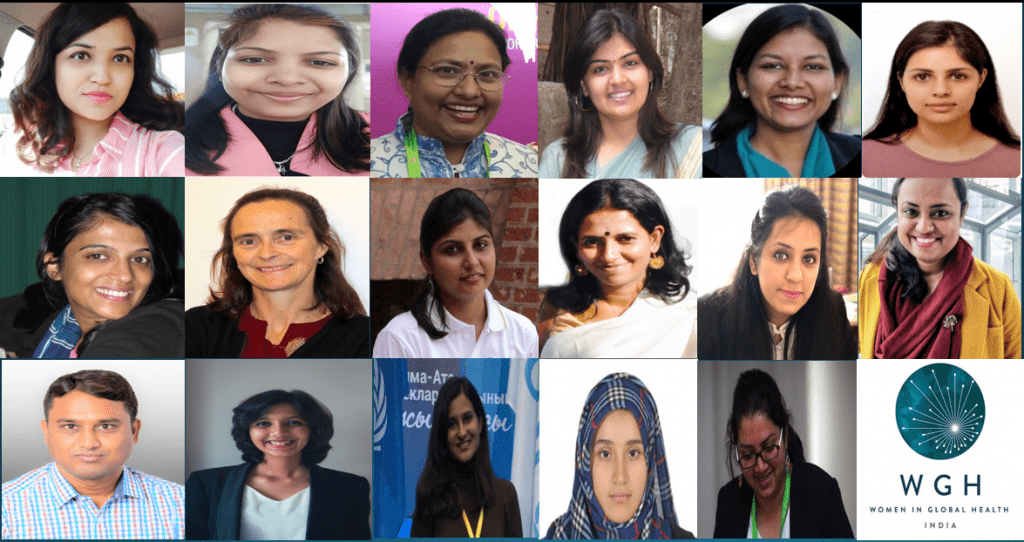 The Women in Global Health India Chapter: Towards Gender Transformative Leadership in Health in India

All four authors are also co-founders of the WGH India Chapter.

We are thrilled to announce our initiative on the occasion of International Women’s Day (March 8), and in so doing, pay tribute to all the women fighting for equal rights and equal representation at their workspaces worldwide.

Despite decades of global targets on gender equality, and Sustainable Development Goals (SDG5 in particular) focusing on gender parity and empowering women and girls, the 2019 Global Health 5050 (GH5050) report found that only 60% of organizations worldwide are committed to gender equality. Furthermore, when looking at the role of women in the advancement of healthcare, women constitute 75% of the healthcare workforce, yet they occupy less than 25% of the leadership positions globally.

This distortion is skewed further in the context of India. Nurse-midwives are the defenders of women and advocates of patients’ rights in health care, but in spite of their indispensable contribution, they rarely have a say in the (largely male) doctor-dominated health policymaking in India. While there is only one male for every five female nurse-midwives, among doctors the ratio changes to one female for every five males.  There is also gross under-representation of women in fields such as surgery and research, and estimates show that men constitute 79 per cent of the professional health workforce at Director and Chief Executive level, while only 21 per cent of these positions are held by women.

Surprisingly (or unsurprisingly perhaps), if the estimates are distilled for other coveted positions in the health care sector, like Senior Officials of Special-Interest Organisations, Production and Operations Department Managers, and General Managers, women seem to have virtually no presence, as nearly 100 per cent of such positions are occupied by men. With leadership positions in health in India greatly skewed towards men, women are under-represented in decision-making roles, and even when it comes to stepping on the first rung of the career ladder, women are hampered by longstanding biases, structural inequalities and gender insensitive policies in the workplace. This serves to further restrict their access to the top, which in turn threatens gender equality by undermining inclusive policymaking and the attainment of equitable health outcomes.

There is a need to understand the magnitude and causes of the gender-driven leadership gaps in more detail, and it is vital to utilize the available evidence to advocate for policies and programs that promote women’s leadership in healthcare. With this intention, a group of women (and men) working towards gender equality and health in India are developing the Indian Chapter of Women in Global Health (WGH).

Originally started by the four of us, who were connected through Roopa Dhatt (Executive Director of WGH) in January 2019, the team now consists of around 40 members, a small group of amazing advisors from diverse backgrounds, and a growing list of active members and subscribers. Having experienced and fought against gender biases in our own personal and professional spaces, and sharing a passion for working towards addressing these biases, is what brought us together.

Inspired by the global movement of gender transformative leadership, we intend to work towards achieving this in India by: a) bringing forth the ground realities of women from their local context to the decision-making spaces, and engaging different stakeholders through dialogues on gender and its intersectionalities with other factors; b) fostering collaboration and campaigning for gender-sensitive and gender inclusive policies in the workplace, providing adequate recognition for women’s contribution, and supporting their advancement to leadership positions.

The vision of the Indian WGH Chapter with its specific priorities and activities will become refined in a series of workshops that we plan to organize in the next few months.

To co-create a shared vision, WGH’s India Chapter is organizing its first event i.e. a pre-launch Workshop at UChicago Centre in Delhi on 23rd March 2020. The intention behind this workshop is to hear from women about their experiences and journeys of reaching and sustaining leadership positions in health, and to collectively develop a vision for the chapter that is owned by all of us. Special emphasis will be paid to the voices of the women who work towards improving the health of under-represented or vulnerable women groups (such as commercial sex workers, women with disabilities, women sanitation workers, etc.). We look forward to your participation and enriching discussions in this pre-launch workshop and many more such events to come.

Those interested in becoming part of WGH India’s Chapter journey, can register here. For enquiries, please write to wghindia@womeningh.org. For more updates on chapter development, follow us on twitter @IndiaWgh.

All in for equality, there is no limit to what we can accomplish together!

Acknowledgements: We appreciate the efforts put in by all the team members in contributing to the development of the WGH India Chapter.

Preethi is the Dean of Chitkara School of Health Sciences, Chitkara University Punjab.