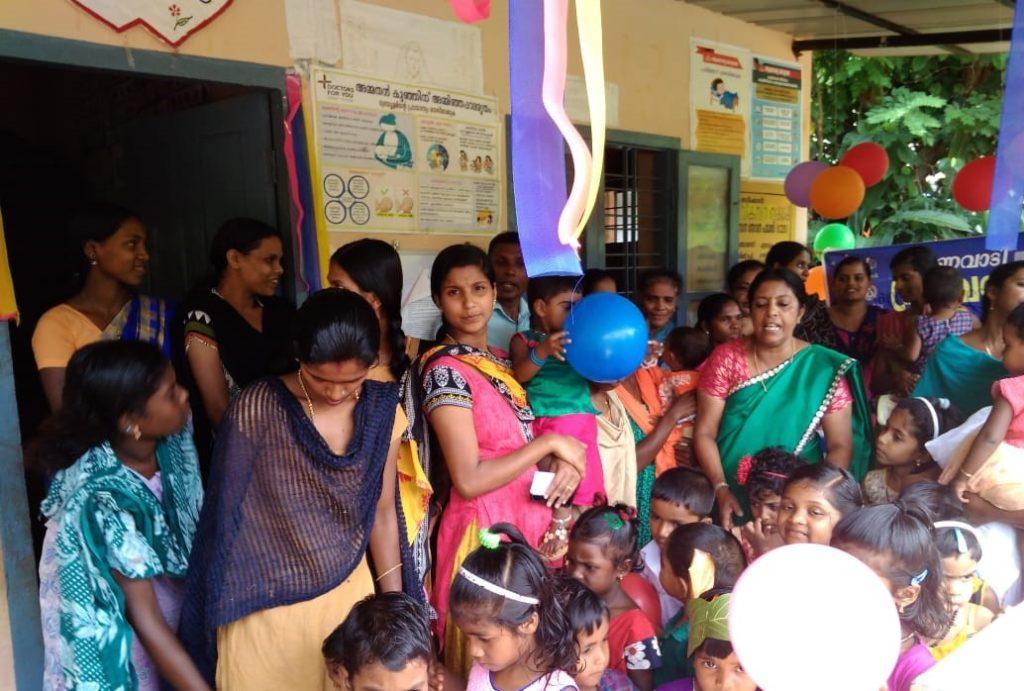 “After the survey in the area, we felt that we could not leave this settlement unattended. In Kallodi there was a vacancy for an Anganwadi teacher. I was asked to go to that place. But my mind was reluctant to leave this place. The then Panchayath President  and the Ward member  were not ready to let me go to this place. It was such a problematic area. During the discussion about a place to construct the new Anganwadi, I strongly stood for this colony. But nobody in the panchayath was there to support me. Such a place was this. If an Anganwadi was built in such an area, would it succeed? That was their doubt. I was then an activist who had been taking part in the campaigns against alcoholism. So, my stand was strong. So, the authority left me to suffer alone.”

These were the words of Gracy teacher in an interview conducted as part of my PhD data collection last year.She was recounting how she started her journey as an Anganwadi worker in the Karamkode Paniya settlement, one of the most deprived Paniya settlements in her Panchayath, back in 1983.  (For the non-Indian readers of this blog: an Anganwadi is a centre that provides health, nutrition and early learning initiatives under the Integrated Child Development Program in India. The Panyia are a tribal community in Kerala).

It was not a comfortable journey for Gracy teacher. The Paniya community had been bonded slaves of upper-caste landlords for several generations, living in precarious conditions. When she took charge as an Anganwadi worker, the Karamkode Paniya tribal settlements were synonymous with squalor, alcoholism, crime, illness, and poverty. Neighbourhood stigma limited their local employment opportunities to low-paying unreliable casual labour. Their work often involved long hours of back-breaking work under dangerous conditions with meagre financial returns. A significant portion of their generated income was diverted to alcohol and substance abuse. Water scarcity always compounded  women’s work burden. Living conditions in the settlement were rather abysmal with piles of foul-smelling garbage in open grounds, which caused all types of diseases among the residents. As a result, almost all of them lived a life of perpetual poverty.

A year ago, when I met Gracy teacher, she had spent 37 years of her life in the Karamkode Paniya settlement. Throughout these years, her commitment had just been amazing. Beyond the call of her duty, she stood with the community members in all their pain and afflictions. She helped the community obtain institutional financial support to address the severe water scarcity in the settlement. She got in touch with the Excise Department to address the problem of making and consuming illicit alcohol in the neighbourhood. Children from the Karamkode settlement assembled every evening in her home to complete their school homework peacefully. As a painter, actor, lyricist, composer, and singer, she taught critical health and nutritional lessons through multiple forms of expression. The Karamkode Anganwadi became a hub of bustling activities. Even now, all the children under age six, young mothers, adolescent girls, health workers, tribal promoters, and ward members usually meet in the Anganwadi. They discuss and plan their work with the community. To them, Gracy teacher is not just an Anganwadi worker, rather, having an emotional bond with each and every community member, she is a mentor to the teenage group, an educator to the students, a cheerleader in their celebrations, a mediator in their family feuds, and a guide in all their troubles. The young and old in the community fondly call her “teacharre”. After 37 years of hard work in the settlement, the community has started breaking down the shackles that had held them back for generations. Once, the people of the Karamkode settlement lived on society’s periphery, and the mainstream health and welfare system ignored them. Today, they are empowered to demand their entitlement and question any instance of indignity. Alcohol consumption has declined drastically (although it’s not entirely eliminated), most of the children are well-nourished, men and women work together to earn their livelihood, and their children go to school regularly, with a sparkle of hope in their eyes.

Gracy teacher’s life journey exemplifies what it takes to achieve health system transformation and should give us pause to reflect on why many of our health programmes fail to achieve their intended goals. Can we really have a biomedical solution to problems primarily shaped by structural determinants? The story of the Karamkode Paniya people teaches us that improvement in structural determinants of health and equitable power relationships are the necessary preconditions for a more effective health system. The persistent health and nutrition inequalities, and continued lack of access to health and nutritional services among indigenous communities in India (and around the world), point towards the failure of our health system reforms to have their intended (health equity) impact. My study among the tribal communities in Kerala as well as other studies have consistently shown that any improvement in health care service provision among marginalised communities becomes ineffective unless structural determinants and (recognising) their lived realities are also addressed. Due to their multiple intersecting disadvantages (in terms of access to vital resources and power), the poor and marginalised can often not afford to follow instructions and practices for healthy behaviour. Pandemics such as COVID-19, but also climate change, air pollution, food insecurity, and emerging new infectious diseases further amplify the vulnerability of the poor and marginalised globally. The current disease-focused service delivery cannot ensure equitable access to services. It’s been said many times before, but it’s worth reiterating over and over again:  our health system reforms can only achieve an equitable health service delivery by addressing the broader determinants of health.

I thank Ritwik Dahake, Kristof Decoster and India HPSR faculty members for their support to prepare this blog.

About Sabu K U

On the arduous Covid-19 vaccination journey in the Kurdistan region of IraqSouth Africa’s COVID-19 Vaccine Infodemic battleAfrica must step up! Reflections from the World Health Summit Regional Meeting, Kampala Uganda 2021Promoting Children’s & Adolescents Mental Health in the United Arab Emirates in the 21st CenturyA year on – how community-based workers have strived to provide continuous support to vulnerable migrant populations, in Montreal and around the globe
add a comment
Cancel reply
1 comments

I liked it. It is so appreciated. Great information..Thank you so much..