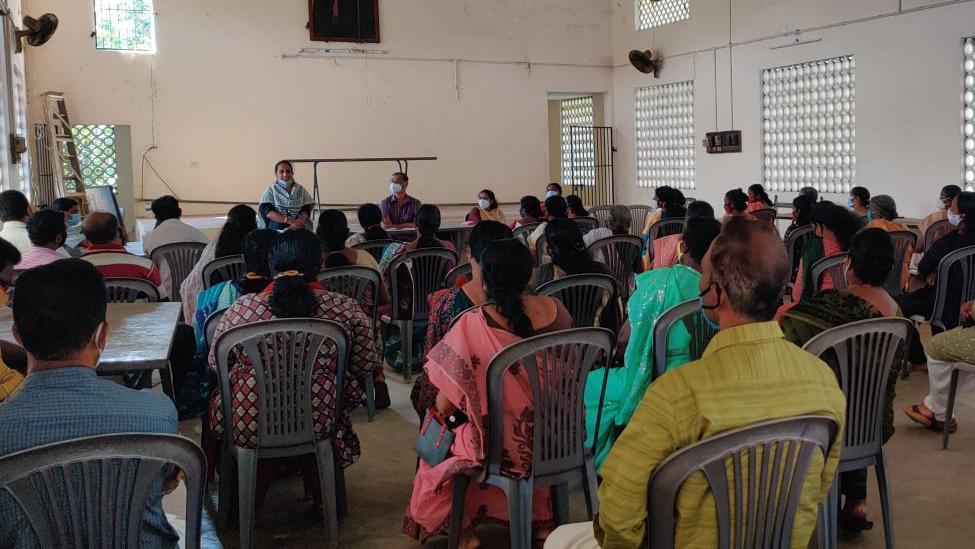 Systemic exclusion of Dalits within local governance: Between dream and reality of affirmative action policies for fair representation

Vimala (fictitious name) loved her role as a gram(a) sevika ( i.e. a woman employed to advise and assist villagers in matters of community welfare and development – in Kerala (local language) known as ‘grama sevika’).   Whenever she had the opportunity to help poor villagers collect their welfare pensions, she felt a deep sense of satisfaction. Little did she know that her life was about to turn, when the “ward” –  as we call administrative sub-units within a village in Kerala – she lived in, was reserved for a Dalit woman in the 2015 village assembly elections. Vimala’s husband, a long-time party worker and an employee at a cooperative bank, broke the news to Vimala. The party had asked him if he wanted his wife to be a candidate for the communist party in the upcoming village assembly elections. Vimala could tell that her husband didn’t really want her to take the responsibility, and just felt obliged to the party leadership. To be a ward counsellor was a tremendous responsibility, far more so than a grama sevika. And even more in her case, as she also had plenty of responsibilities at home with two school-age kids. The whole thought made her nervous, but she also felt somewhat excited about a possible new horizon in her career.

Since 2010, Kerala reserves 50% of the seats in the local body (Panchayat) elections for women. As for Dalits, the proportion reserved is in line with the village (demographic) composition. It is one of the few states in India doing so, aiming for fair representation for women and Dalits in this way.

How did the local elections in Vimala’s village work out? Well, she won. Even more than that, with her party earning 11 seats and thus the majority (the panchayat council had 17 ward members in total), she got the presidential post – which also was reserved for a woman. She was unable to comprehend this series of events which felt like a rollercoaster. On one fine morning, suddenly she was dealing with the significant responsibility of “Panchayat President”. Now that she had the constitutional power to act, she genuinely wished to bring development to her community and others.

She envisaged making simple but significant changes in her Panchayat. The Dalit community including herself, to a large extent, was still a downtrodden section with little progress in terms of health and livelihood. But reality soon struck (her) when she began to realize that decision-making within the village assembly was a whole different ball game. The Vice President, a non-Dalit male soon took control over the governing body, in spite of being the ‘vice’. She also came to learn that the local party leadership wanted the Vice-president to informally preside over the decisions within the assembly. The reason? The party leadership felt that a candidate from a reserved seat might not be ‘capable’ enough to effectively handle the responsibilities of the village. The common misconception that women are gullible enough, made things even more difficult for her.

She protested vigorously, since she always yearned for the betterment/advancement of her Panchayat. Nevertheless, an indeterminate number of her ideas were rejected in all respects. A conflict gradually burgeoned between the two of them. She could not accomplish her official responsibilities partly due to this ongoing conflict and the additional burden of the household duties she had to oblige to. Vimala kept questioning the authoritative attitude of the vice-president. Most of her concerns were unaddressed, however, and she accused the Vice- President of sabotaging her. The other members at the village assembly remained silent, a reverent silence. Even though they both belonged to the same political party, the non-Dalit male member was supposed to call the shots.

Worse, the Panchayat council had indicated its approbation of all the plans proposed by the Vice President, even more to her dismay. Meanwhile, members from the opposition (Congress, BJP, ….) were blaming the problems on the “lassitude” and “poor leadership” of the “incapable Dalit President”. Her husband was dissatisfied as well. In his opinion, she could not satisfy her responsibilities, both personal and political ones. Furthermore, she was accused of having extra marital affairs, which “inspired” her husband to come up with infidelity charges against her. Her husband was also threatened with removal from his own job by the party, unless he made his wife step down from her position as the president. To this day, she strongly believes this is due to the power struggle between her and the vice-president.

The continued conflict and questioning of the vice-president’s undue authority ended up in her removal from both the position of President and the party itself. In her place a new (and more subservient) Dalit woman was appointed by the vice-president. Though Vimala beat a hasty retreat and pretended none of this affected her, things already went spiralling down at home as well. Vimala tried to mollify her husband but in vain. As was the common norm in Indian society, she had to face casteist and sexually charged abuses owing to her ‘greed’ to power. Vimala soon became a social outcast, a divorcee forced to concede. The mere reason being her candidature, which was actually imposed upon her by others.

The policies of affirmative action in decentralized administrative entities allude to the historical fault lines between multiple socio-cultural dynamics in the country. Though they present themselves as windows of equity and fairness for historically disadvantaged social groups, in reality they continue to remain sites of oppression and exclusion. As is evidenced in my (forthcoming) research, the strategic use of reserved candidates contributed to legitimised political space(s) for dominant caste men to manipulate and continue to enslave Dalits and women, and consolidate their own interests in the process. At the same time, this denied Dalit women’s right to independent and empowered participation in local governance. Those who asserted their right to freely express their views in meetings were often labelled as ‘outspoken’. On top of this, many Dalit women presidents stated they have faced direct obstacles while performing their duties, eg. being silenced or ignored, being denied information on Panchayat activities, harassments and threats ….

Sreenidhi Sreekumar is a doctoral research fellow at Sree Chitra Tirunal Institute for Medical Sciences and Technology in Kerala, India. His research focuses on primary healthcare and health equity, especially for marginalised social groups. He is an EV alumnus of the 2020 cohort.