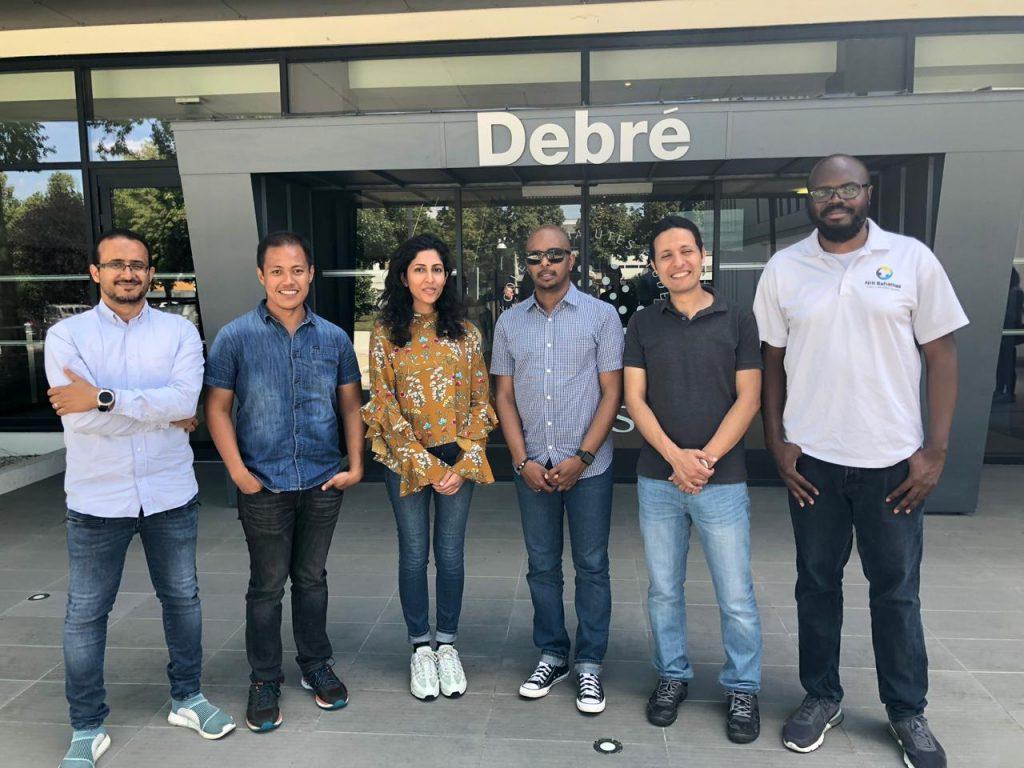 Ahead of the graduation ceremony of the 12th cohort of the European Public Health master’s programme in Rennes, France ( of which I am a proud graduate as well J), I thought it would be a nice idea to ask my fellow public health colleagues a question I have been trying to answer for a long time: what should be done differently, at the global and national level, to make health systems thrive in fragile states?

(PS: In this contribution, I will use a fancy acronym to refer to fragile states: FCAS, which stands for fragile and conflict-affected states ( settings or situations). Very much “trending” these days. The acronym and FCAS. )

So, let’s start our exploration. You may want to know what has been done already to support health systems in these settings before asking what should be done differently. And before even asking that, which are these FCAS countries? And what do we mean by FCAS?

WHO identifies 36 countries and territories as FCAS based on the latest World Bank’s Fragile, Conflict, and Violence Group’ List of Fragile Situations around the world. Not surprisingly, the majority of these countries are found in the WHO AFRO region (15 countries), followed by EMRO (11 countries). There are 2 in PAHO, and 1 in both the EURO and SEARO regions. In ten years’ time, the World Bank expects 50% of the most vulnerable people to live in FCAS. “Conflicts drive 80% of humanitarian aid and reduce gross domestic growth”, the World Bank has stressed.

I then wondered, is there a standard definition for FCAS?

The European Commission and World Bank refer to FCAS as contexts where state institutions are weak. Among the main characteristics of these states: weak governance, political instability, a failure to deliver basic public services (or unwillingness to do so), absence or weak rule of law, a failure to protect citizens and human rights, worsening poverty and inequalities. The state of fragility is complex and often multidimensional, the Asian Development Bank urges, which makes it even harder for FCAS to exit fragility. Countries can stay ‘fragile’ for decades if issues surrounding governance are not comprehensively and permanently addressed. Conflicts can complicate fragility or can lead to it.

In these contexts, health systems’ basic functions are impaired as a natural consequence of the weakness of state institutions. In many areas around the world, fragility has become a protracted challenge (see Syria, Libya or Yemen for instance), which can persist for decades  – rather than a short-term reality. Therefore, an approach is needed that ensures the support of health systems in such contexts while efforts for peace and development are ongoing. This issue, of supporting fragile health systems, also intersects with humanitarian health aid – the humanitarian-development nexus, thus also needs to be taken into account.

Checking with some experts and friends

And so I asked a number of public health specialists (fellow classmates mostly) who have diverse backgrounds and experiences in – altogether – eight countries to help me answer my question: what should be done differently, at the global and national level, to make health systems function better in fragile states?

In her answer, Sanam Shah, a family medicine physician from Pakistan, pursuing her master’s degree in public health in UK and France, was worried about the rising tide of conflicts and political instabilities in recent years.

Dr Shah also highlighted the challenge of little evidence on FCAS, making it even harder for public health professionals and policymakers to make informed decisions on what works best in such situations:

“My country Pakistan was also home to one of the largest populations of internally displaced population (IDPs) and what I noticed was a scarcity of literature that could guide an appropriate approach to health systems.”

Magdy Eissa, a public health specialist from Egypt, described the dilemma between humanitarian aid and development in FCAS:

“Unfortunately, this fragile status encourages many actors to provide aid without coordinating with the health government agency, aiming for better & faster accessibility and response. However, this can have very bad consequences for the health system in place as it will decrease overall confidence in the public health system and will increase this fragility that the system struggles to get out of in the first place.”

Dr Eissa reckoned that some organisational structures negatively impact health systems in FCAS: “Many countries in the Middle East still don’t have a well-developed disaster management authority integrated in their health systems, and mainly rely on their military forces to do the job.”

In the opinion of my Filipino colleague, Michael Caampued, a public health specialist, “an expanded view to understanding health systems is needed first of all, as the “traditional” health systems view is not instrumental to shaping an appropriate approach to health systems in FCAS”.

Dr Caampued shared some reflections from the Marawi siege in the Philippines, during which a hospital was captured by terrorist groups: “I was part of the national meeting where regional administrative offices for health decided to pull together their efforts and resources to help with the Marawi siege”.

“The difficulty is the language barrier; health systems and health systems approaches were not shaped in the language of security”, he emphasised.   “Health always packages itself as an untouchable right, but it’s not something you place in front of a terrorist and say, ‘hey, do not touch this’, as this would instantly make it part of the targets of terrorists”, he reflected, adding: “As health workers, we lack the language of negotiation in conflict situations”.

Tara Chen, a public health and health promotion professional from Canada stressed that understanding context is pivotal: “We recognise that every system is context-specific. The solution is not a one-size-fits-all. It needs to be tailored, specific and considerate of all aspects to truly be a successful strategy.”

How to strengthen health systems in FCAS?

So, what should be done to strengthen health systems in such contexts, I then asked my colleagues.

“In the context of Nigeria (with Boko Haram), local and national governments need to do more in terms of allocating funds and empowering and building capacity for workers, people and citizens that are affected by different contexts of terrorism”,  Naomi Limaro Nathan, a medical doctor and a specialist in governance of health systems in transition, replied.

Mohammed Albagir Altayyeb, a medical doctor and a public health specialist from Sudan stressed the importance of understanding the local context first, as “most of the solutions we apply to solve the problems in the fragile states are basically imported from industrialised countries”.  Plus, “health systems are constantly evolving, in FCAS just like in Northern countries, there is no “perfect” health system”, he added.

A public health colleague from Hong Kong shared her conviction that “the ‘global health’ culture has been emphasising how developed countries and international aid can help to achieve Health for All while failing to pay enough attention to the real controversies that foreign aid brings in many contexts”.

“Even though we see improvement in the representation of fragile states in global decision-making, it is still not going fast enough”, she emphasised.  “We should cultivate a sense of solidarity and understanding, as all nations were once fragile in their history, and on a journey of development (successful examples are Japan and France)”. She suggested recognising public health as a profession in these states, and to include public health professionals in decision making.

N. Charles Hamilton, a public health, policy and communication specialist from the Bahamas, suggested we need to change our narrative on fragility: “Why are these states fragile? Larger forces at the global level are among the root causes of fragility, look at what is happening in Yemen, these (i.e. global) forces are too often completely ignored”. The international community needs a reality-check, which starts by acknowledging the negative impact of some global actors which drive fragility in the first place. “There is a wider responsibility which goes beyond the states, beyond blaming the people in these countries”.

The way aid or development assistance is managed and distributed often deepens fragility in these countries, Hamilton added, referring to aid conditionality and the need to comply with donors or multilateral agencies’ regulations, which often adopt an economic, for profit perspective rather than a culturally sensitive and needs-based approach.

Mr Hamilton also mentioned an example from the Bahamas, where these organisations advocate for development and investment in infrastructure, offering loans to the government. But when it comes to implementation of these projects, these agencies question the national capacity and put conditions that are impossible to fulfil by a national partner. The process typically ends up in bringing in an “external company”, affiliated with these agencies, to implement the project.

Let me finish by a few more quotes from the experts/friends.

Dr Altayyeb emphasized that health systems in FCAS should be led by national, or at least regional brains. Dr Caampued suggested some more solutions that might strengthen health systems in such contexts: “ the integrity of health service delivery should be ensured in a more tactical and creative way, rather than textbook-style. For example, alternative (or even slightly ‘subversive’) approaches (like mobile clinics, … in secret, in order not to draw attention to health workers in conflict zones) might succeed in delivering the services in such circumstances without creating chaos”, he explained. He also believed that health can be used as a negotiating platform for peace.

Dr Shah added, “priority-specific vertical interventions are less desirable in the long term and should be integrated in more holistic approaches in the local context for sustainability, for example, school feeding programmes”. Dr Shah also emphasised the importance of establishing partnerships between public and private institutions, which should be the responsibility of the local governments.

Oops! I just realised that I have launched a thought-provoking discussion by asking the above-mentioned question. I have come to the conclusion by now that this could be an interesting research question in itself, and who knows, perhaps the subject of my upcoming (but still somewhat ‘fragile’) PhD project?