Subscribe
Home > Featured Articles > Reframe everything you are doing within the lens of planetary health: the Canadian Conference on Global Health in a time of Fragmentation 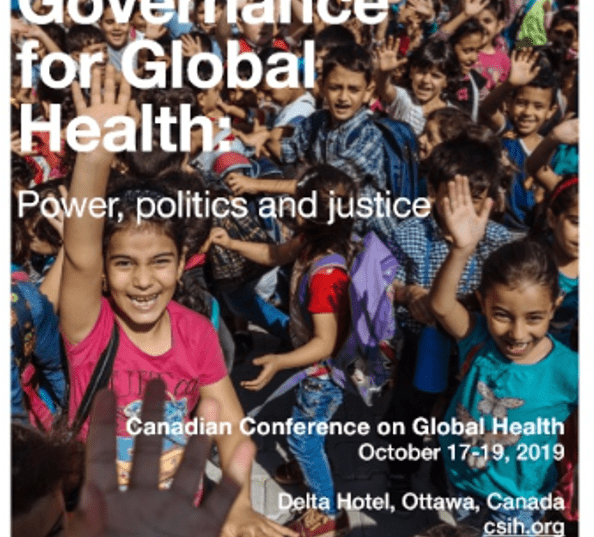 Reframe everything you are doing within the lens of planetary health: the Canadian Conference on Global Health in a time of Fragmentation

Last week marked the annual  Canadian Conference on Global Health  (CCGH), bringing together academics, practitioners, and policy makers around the theme of governance – specifically, the power and politics that have become so characteristic of global health today. From October 17-19 ( with a side event on the 20th), the focus was on all countries, and in particular, Low- and Middle-Income Countries (LMICs) with existing partnerships and collaborations with Canadian research and programmatic partners, acknowledging the importance of accountability in governance as well as the power and privilege occurring in North/South collaborations. For a policy wonk who did her PhD on tracking the discourse around global governance for health leading up to the SDGs, this was a particularly exciting conference year, but as luck would have it, I came down with pneumonia, rendering me incapable of attending. Instead, I experienced first-hand the decentralized Canadian health system as a service user (!).

Nevertheless, as an avid Twitter follower and member of the conference planning committee, I feel I can still write this editorial more or less “legitimately”. The plenaries addressed global health diplomacy, accountability, and the various frameworks that shape policy such as Universal Health Care and/or Coverage (whatever lingo suits your  ideology and convictions) (Day 1); challenges of good governance in times of conflict (Day 2), and the impacts of climate change and diversity on health (Day 3). Gender equity was a cross-cutting theme and was highlighted at a networking breakfast where one could meet some of the leaders listed in the Canadian Women in Global Health directory, and identify structural barriers to women’s career advancement and begin a discussion on how to mitigate these.

The closing panel – Intersectoral Action for Governance and Policies – was a stellar one, with a reminder to link the ecological and social determinants of health and a call to action on climate. With the CCGH closing just before the federal election (scheduled for October 21), one speaker very strongly appealed to the audience, “the system isn’t working! We need to adapt! I don’t very much trust the older generation with this,” urging students and young professionals to go out and vote for a much-needed transformation from the status quo.

The sentiments expressed at the conference represent what many, if not most people have on their minds, not just in Canada but all over the world: a hope for good governance, combating social injustice, and ensuring that the power is with people instead of entities with competing (or questionable) interests. In line with the mood of many (and especially young) people around the globe, a rising anxiety was also palpable about rapidly unfolding climate events and the impact they already have on our food systems, living conditions, and health. In a sense, this conference, ending the day before a federal election in Canada was more than timely.

Except the outcome of this election indicated only that Canada is deeply divided (like many other countries now in the Global North), and there is little scope for the economic justice, social justice, and  bold climate action plan that we urgently need, both in Canada and overseas, partly due to this polarization. All of these topics were addressed in some aspect of the CCGH program – panels and posters spoke to the unequal power held by multinational companies and other commercial determinants of health that promote the consumption of salt, sugar, and fat, contributing to NCDs; issues of social justice, local governance, women’s active participation in decision-making, culturally appropriate and gender-sensitive services for health, disability justice; and finally, the SDGs and wide-ranging intersectoral action needed in the face of looming climate catastrophe. The results from the popular vote (speaking to Canada’s broken electoral system) indicated that many Canadians want action on those issues, but certainly the re-election of a government with a lukewarm approach to making bold social and economic decisions within planetary boundaries makes it difficult to believe that anything outside the realm of business-as-usual is about to happen.

From my own experience these past two weeks as a user of Canada’s widely lauded Universal Health Care system (that makes up part of Canadians’ identity), I can happily confirm it is a very good one, but there is work to be done if we want it to be known as an equitable health system as well. This relates to important issues like patient-centred care, making diagnostic services easily accessible, making pharmacare a reality, and linking these with other socially important services such as (clean) transportation (in my case, 24km to access my family doctor, and a further 8km for X-ray imaging services) and others that are very much part of the national conversation around determinants of health (i.e. affordable housing, indigenous communities’ access to safe drinking water, universal basic income). These serve as a reminder that all countries, be they LMICs or high-income, have challenges in having responsive, well-functioning and equitable public health systems.  Or as Dr. Tedros and others keep telling us, UHC (and making progress towards the highest attainable standard of health) is a never-ending journey.

Final note: it’s nice to see CCGH is moving away from a neo-colonial, internationalist framing of health to one that acknowledges the important work we still have to do in our own communities, in the lands that we live in, as custodians or as settlers.