Subscribe
Home > Featured Articles > Reflections from the World Health Summit 2019: Three days with much to chew, including for global health leaders 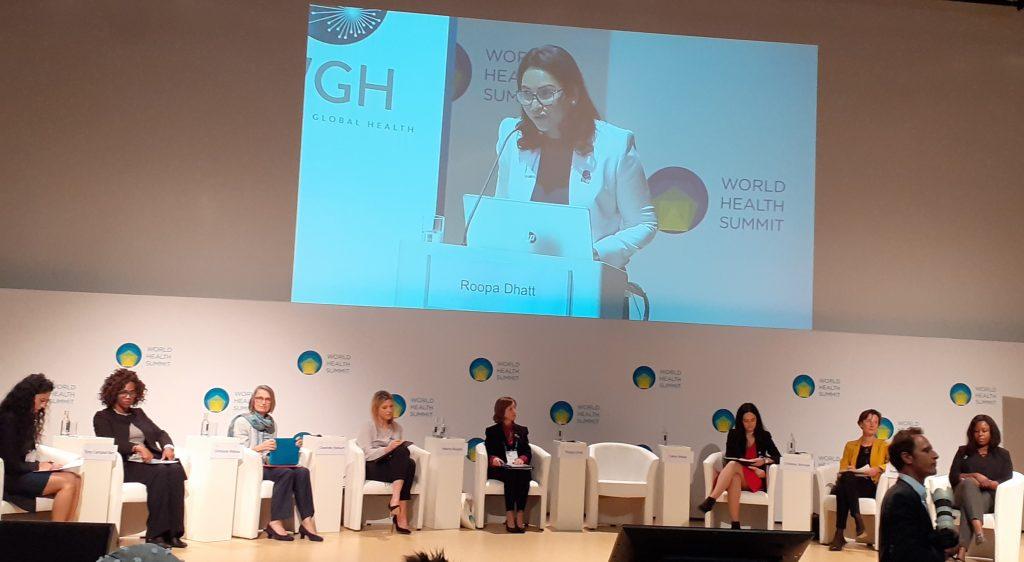 Reflections from the World Health Summit 2019: Three days with much to chew, including for global health leaders

Last week, I attended the World health Summit (WHS) in Berlin, Germany, with 2400 participants and 300 speakers. With the abundance of exciting sessions scheduled over the three days (27-29 October), I was spoiled for choice. After some reflection, I managed to make up my mind, though, on which ones to attend. I didn’t end up disappointed!

I first attended a panel session on gender equality in the global health workforce, organized by Women in Global Health.  In an encouraging sign of the times, one of the chairs of the session, Hélène Boisjoly (Dean of Medicine, University of Montréal), mentioned an increase in women occupying her University’s (top) positions since last year’s meeting. Nevertheless, there are still many global health organizations in which men remain the main drivers, as you all know. References in the session mostly pertained to the situation in high-income countries, data on institutions and organisations based in low and middle income countries are still mostly missing. That’s a gap that needs to be tackled sooner rather than later, as the situation is surely not better in most of our settings. Promisingly,  Women in Global Health is currently setting up branches in the Global South pushing for gender balance also over there. Less encouraging was the fact that this panel on gender equality was, once again,  dominated by women – some would even call it a “womanel” .  Fortunately, there were some more men in the room, so it seems we are making at least some headway. Nevertheless, it still seems uncomfortable for (too many) men to navigate through the gender equality spaces. Is this because men don’t want to be seen as ‘overcompensating’, a bit like Justin Trudeau  overdid it  during a visit to India a while ago? I don’t know. Maybe Women in Global Health could focus a bit more on the negative (health and other) impacts of the current situation for most men as well, to get more men involved in this important agenda?

Other sessions I attended on that first day featured the obvious calls to engage all stakeholders and muster “political will” in achieving primary health care for all. The surprising bit (at least for me) was to note the low vaccine uptake in Germany even with an average person visiting a doctor 26 times in a year! And then, it was time for the opening ceremony, chaired by Detlev Ganten (founding president, WHS). The (long) list of speeches enunciated unexpectedly resounding message on climate and health, as a special tribute to Alexander von Humboldt, celebrating his 250th birthday. Andrea Wulf, a well-known biographer of von Humboldt, gave a vivid speech on the man’s significance, in his time and far beyond. She cited, among others, the way he passionately conveyed his holistic vision on the environment, planet and atmosphere, so important also to tackle the wicked challenges in our age. Wulf urged the scientists in the audience to convey both the good and the bad about nature, and not just hard (& often dry) statistics. She also encouraged them try to bring their message with the same passion and emotion as von Humboldt had shown in his time.  The opening plenary certainly whetted my appetite for the next day.

On the second day of the summit, the Universal Health Coverage (UHC) session in the morning zoomed in, among others, on the lack of coordination in civil society in the quest towards “health for all” and “leaving no one behind”. Civil society, certainly in sub-Saharan Africa, still operates too often according to vertical programs, Githinji Gitahi, UHC 2030 co-chair, mentioned. There’s no cross-cutting “health” civil society for health systems and UHC (yet), and their (still too siloed) voices are thus not well-coordinated. Even more cross-sectoral civil society engagement, as is needed for the Global Action Plan for Healthy Lives and Well-being for all (GAP) (see below), at the domestic level, certainly still has a long way to go, I heard in a plenary on the final day.

Over to one of the global health security (GHS) sessions then, on Monday morning, which featured Michael Ryan (WHO Emergencies program), among others. The importance of GHS can’t be overestimated in our times, as the protracted Ebola outbreak in the DRC once again displays. In the response to health crises in war conflict areas, security officers are increasingly – sadly perhaps –  crucial, panelists mentioned. However, Mercedes Tatay from Doctors Without Borders, said that the communities often see them as a threat. In response, Hans-Ulrich Holtherm, from the Medical Academy of the German Armed Forces, pointed out that people perhaps need to break out of their “perception bubbles”. On this one, I side with Mercedes’ view, however – maybe it would already help a bit if security officers began to wear plain clothes (instead of their military uniform)?  Even if the German military in the room didn’t exactly look threatening (certainly not afterwards when gently taking a sip from their juice in the corridor), I believe many people from Africa would agree with me on this issue.

I gently differ from fellow EV Renzo Guinto, on whether climate change was ‘mainstreamed’ in most sessions at the World Health Summit. He’s probably right about some of the keynotes (especially on the final day), which felt strangely disconnected from the  climate emergency, and he probably also contrasted the WHS with the climate focused pre-event he attended, but my impression was that throughout the panel sessions I attended, the (syndemic) links between climate change, food, … and health were at least mentioned, for example in a session on commercial determinants of health, or one on the need to introduce climate health lessons in public health courses at the university. For sure, the ‘overall planetary health’ lens/frame at the World Health Summit is still “a work in progress”, but certainly the kick-off has begun.

My anticipation to learn a lot from the WHS “focus on Africa” wasn’t satisfied as much. Some rather obvious statements were made, such as the need for African countries to work together, alluding to the Agenda 2063 framework among others. It was kind of striking, in that respect, to see how old animosities still play a role, for example between countries like Ghana and Nigeria. In room Virchow, a minister from Ghana complained bitterly that Nigeria doesn’t really want to learn much from his country, even where it actually could, like for example on digitalization.  Another session on the need for capacity building in low income resource settings showed a notable distinction in terms of funding environment statistics in SSA. East and South Africa had lots of funders in recent decades, while West and Central African counties got far fewer, including the countries in the Sahel region, currently under a lot of security (& other) pressure. A key question is how to find the right balance between aiming for  excellence and equity among the institutions selected. There was no immediate answer, but “cherry picking” of the more established institutions in East & South Africa, in international collaborations or otherwise, can certainly not be the main answer.  Against the backdrop of capacity building of individuals, brain drain remained the big elephant in the room.  All in all, I hope the regional outreach of the World Health Summit, with the next regional summit taking place in Makerere (2020), will provide more insights and progress on this promising ‘strengthening capacity and institutions in Africa’ track.

Ilona Kickbusch (in one of the final plenaries) and Margaret Chan, former DG WHO (in the Monday panel session on UHC), both stressed that “Health is a political choice”, and Dr. Tedros reiterated this stance even more empathically, in his own final address. I personally feel that indeed, it is time to move the politics (also) to the global agencies and to have, if needed, even “uncomfortable” discussions of working together in the partner countries, moving towards real multilateralism. Surprisingly all agencies were in agreement, the UNFPA representative even mentioned that “coming together is not a choice but an obligation”, although with a caution on the implementation. Some panelists also emphasized, accurately in my opinion, that the pendulum shouldn’t swing back too far. Whereas in the past, vertical approaches were no doubt too dominant, the new (more horizontal) engagements should try to maintain the same focus on impact and results as some of the vertical initiatives displayed in the past.  I was also impressed by the Wellcome Trust Director, Jeremy Farrar, who committed to taking the same conversation to the research funders community.  Finally, I can only hope that the paradigm shift they have in mind will indeed translate locally, at the country level. So that indeed, no one is left behind…