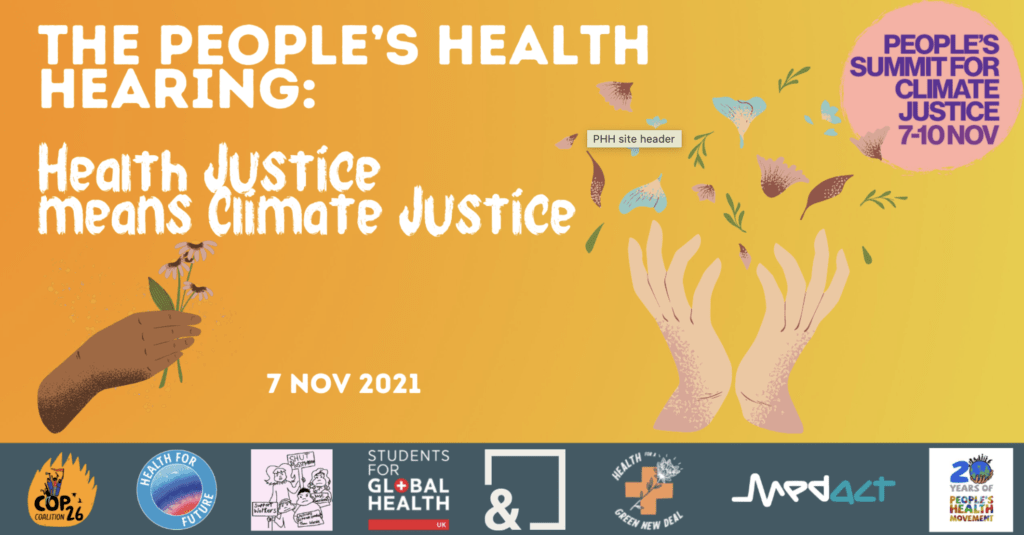 COP26: Health at last gets its big day.

I am, of course, referring to the People’s Health Hearing: Health Justice means Climate Justice that convened on Sunday 7th November, and which can be viewed on YouTube in both English and Spanish. Unlike other events on health held over the mid weekend of COP26, this hearing was conceived primarily as a platform for people from around the world to recount the direct impact that climate change is having on theirs and their communities’ health. Incredibly inspiring, the testimony was frequently emotional and often harrowing. The tone was sombre and respectful, opening with the Sri Lankan Magul Beraya. There was no dancing or whooping.

People representing indigenous communities spoke of loss but also action. The Ogoni activist Ken Saro-Wiwa was executed on November 10th 1995 by the Nigerian military, so it was timely that the first speaker AkpoBari Celestine spoke of the Ogoni’s continuing struggle against oil multinationals that have wreaked havoc on the ecology of the Niger delta and the health of its local population. Big oil slicks through the COP, with Global Witness revealing that 503 delegates were affiliated with the fossil fuel industry (more than the number of delegates of any individual country). As an indication of how ‘at home’ the oil industry feels with the host of this year’s COP, the-no-longer-Royal-Dutch Shell announced this week that it would be moving its HQ from The Hague to London.

There were several themes running through the testimonies. We heard of the direct and indirect impacts of climate change on health. We know very well that climate change is increasing the range and incidence of communicable and non-communicable diseases, but Julia Vieira described how flooding also increased the number of alligator attacks on children. Max from Uganda described the direct effect of drought on food supplies, but also recounted how the oil multinationals Total and CNOOC greenwash their image through support for tree planting initiatives while investing billions of dollars in laying pipelines for oil and gas, supported by subsidies from the Ugandan government.

A recent editorial in the Lancet Planetary health points out the need to render visible what vested interests are doing their best to keep obscure. For example, the fact that, since the 1960s, more than a third of greenhouse gas emissions have come from 20 multinational corporations. Education is key, and it is incumbent for health professionals to help tell a story that demonstrates the health consequences of the polluting actions of the extractive industries.

Part of that story is recounting the cost of doing nothing. In financial terms, the costs are high. As Patty Miranda told us in her testimony, typhoon Vamco cost the Philippines $427 million, killing 102 people and forcing 14,000 to evacuate their homes. Another part of the story is to dare to speak what others don’t. Rhiannon Osborne began to do that on Saturday, pointing out to a facilitator from the WHO that the economic system itself needed to change. While that message clearly fell on deaf ears, in truth we cannot grow our way out of the climate crisis. Testimony after testimony at the People’s Health Hearing told the same story – ‘they’ extract at ‘our’ peril. Fossil fuels must remain in the ground.

One of the testimonies exclaimed: “A year on at COP26 and the most affected people and communities, those that have contributed the least to the climate crisis, are still excluded from climate policy decision making tables!”. This is wrong not simply because it is unjust but because it is unwise. Indigenous communities are at the front line of climate impact, and thus at the frontline of climate action. The health community should listen and learn from their testimony, and then act on it.

I want to end with the words of one of the speakers in session two, Tammam Aloudat. I don’t think I’ve ever heard such an emotional appeal. If you listen to his  testimony  (which begins at 1.00), I defy you not to be profoundly moved:

“I’ve been in Papua New Guinea just across from the artificial border with West Papua and I’ve served in a hospital there in eyesight from an Australian mining company that has allowed people from there to come for a month and leave for a month as they exploit the land of the people we are trying to help, without much success. In parts of Sub-Saharan Africa that have been repeatedly exploited, repeatedly subjected to politics that allow people to fight each other instead of their exploiters. And we’ve looked for ages at what is known as the social determinants of health as if poverty and hunger and lack of education have come from a void… The neoliberal onslaught continues to strip everything bare and, for once, this is the first day that I am actually hopeful, in a very long time. And I thank you for that. Thank you for having us.”

Dr Andrew Harmer is a Senior Lecturer in Global Health at Queen Mary University of London where he directs an online MSc in Global Public Health. He is also an activist and has participated in various direct actions to raise public awareness of the health consequences of climate breakdown.