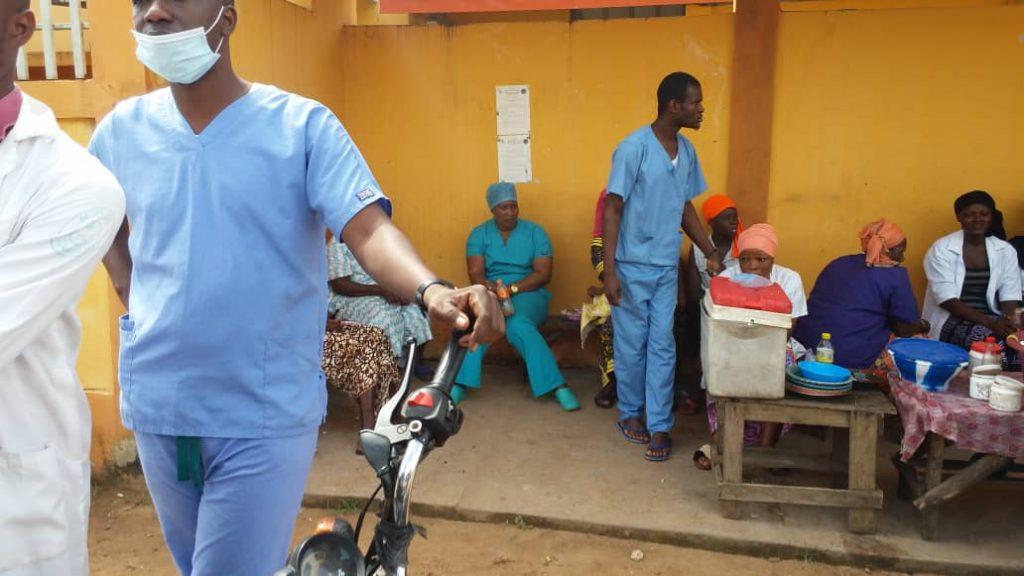 Mayeni: ‘’I wanted to exhaust labor at home… but it was too late’’

Mayeni’s story is similar to the stories of many other women living in Maferinyah (a sub-district of Forécariah (city), Western Guinea, who, due to mistrust in government health workers and (mis)perception of C-sections, prefer to give birth with traditional birth attendants (TBAs), or at home. In such contexts, it is important to understand how experiences and perception of caesarian sections (C-section) services in Maferinyah’s rural health centers, influence women’s choices around childbirth.

After hearing Mayeni’s story during an ethnographic study (ongoing doctoral thesis – not yet published) on maternal health seeking behaviors, we felt it would be interesting to explore this further, and investigate the perception and experiences of (eleven) other pregnant and postpartum women from the same community around C-section, which was introduced nearly eighteen months ago.

Guinea experienced its most deadly epidemic crisis ever from 2014 to 2016: the Ebola epidemic. One direct consequence of this epidemic crisis was the collapse of the health system, which negatively affected both the demand and quality of maternal health services. This negative impact may have been even more pronounced in rural areas where Ebola-related community mistrust in the health system resulted in violence against Ebola response actors. Post-Ebola, once the focus was again on strengthening the health system, including maternal health, C-sections were added to the package of free maternal health services in some rural health centers –including the Maferinyah health center – in 2017. The introduction of free C-section in rural areas aimed to increase timely utilization of obstetric services by women who had been facing distance and transportation related barriers to accessing emergency obstetric care. However, in spite of a user fee exemption policy for obstetric services, women still paid to give birth in health facilities. Within such context, it is probable that women pay for C-section which is supposed to be free of charge.   What’s more, poor quality of maternal health services has been reported in the context of the user fee exemption policy for maternal health in Guinea. It is therefore important to understand how the user fee exemption policy for maternal health shapes women’s perceptions of the newly introduced C-section services in rural Guinea.

Below you find some of our findings. The perspectives of the pregnant/post-partum women are complemented by providers’ views.

While some women thought C-sections could be important in saving the life of mothers and their babies, other women did not see the need for them, and in fact believe they are exploited by health providers as a means of earning money in a context where paying a substantial amount of money for vaginal delivery is less acceptable. Based on this, their conclusion was that most C-section cases performed at the health center are medically unnecessary. A further argument to support this was the notion of surgeries being for diseases, which childbearing, a natural process in a woman’s life, is not considered to be. Finally, they perceived C-section as compromising their future prospects of maternity since, in their view, this can cause infertility.

Providers, however, mentioned that all C-sections performed so far at the health center were medically relevant. According to them, birth complications, mostly due to delay in seeking appropriate childbirth care, constitute the main reason for C-sections.

Health providers acknowledged that they request 200,000 GNF (approximately 20 euros) from each woman who is attended for delivery through C-section. They claimed this money is used to buy consumables and drugs for surgery and cover the salary of the obstetrician who is not paid by Government, but by the health center.

These insights shed more light on the need for Guinea’s government to ensure the availability of relevant materials (equipment, consumables, and drugs) and a salaried obstetrician in rural health centers where C-section has been incorporated in the free package of maternal health services. Regular monitoring of C-section services (materials consumption, documentation of C-section indications) would also improve the service quality in these settings. Finally, raising community awareness on C-sections is also a priority, especially in a context marked by a history of mistrust in government health services.