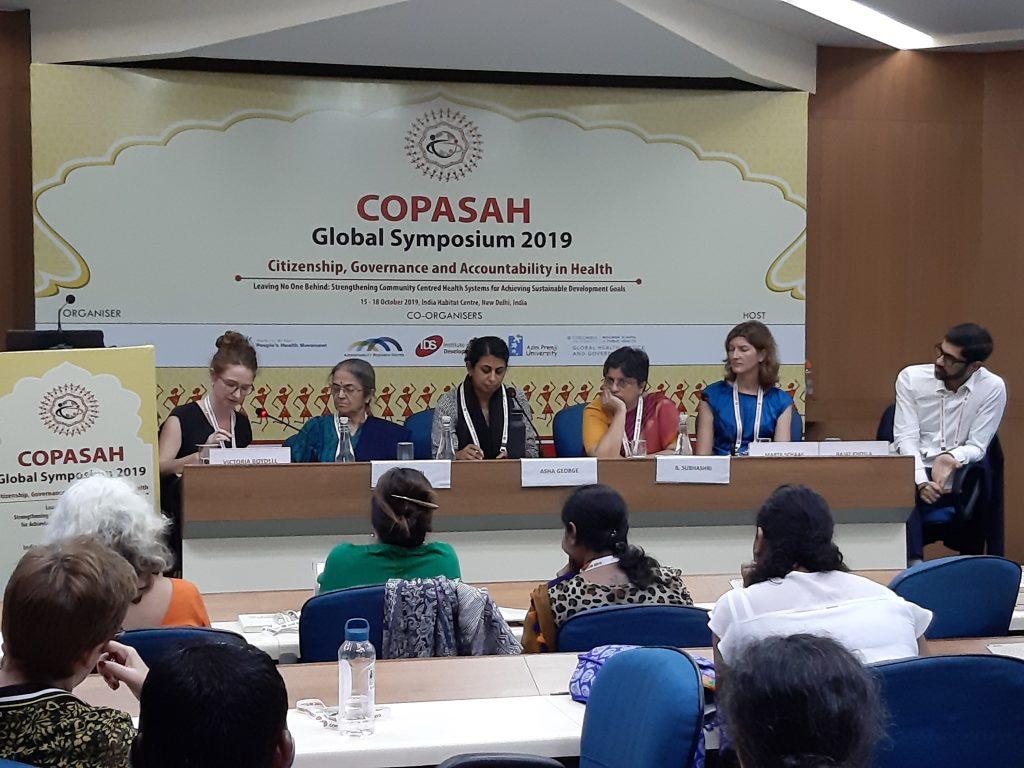 This past week, over 500 academics, activists, practitioners and community members gathered in New Delhi for the Community of Practice on Accountability and Social Action in Health (COPASAH) 2019 Global Symposium on Citizenship, Governance and Accountability in Health. Despite its jargon-laden title, the Symposium itself offered stimulating and often challenging presentations and debates. Refreshingly, the Symposium examined social accountability not (primarily) focusing on policies, rules or global health architecture, but from the perspectives of people, patients and communities, including ethnic, indigenous and sexual minorities who were well represented, in both force and song.

The high-quality discussions revolved around five themes: Community Action, Indigenous and Marginalized Peoples, Sexual & Reproductive Health and Rights, the Private Sector in Health, and Health Workers. Alongside plenaries and parallel sessions, the Symposium comprised workshops, dramas, cultural events and film screenings, and a poster exhibition. Dedicated sessions for regional consultations allowed time for in-depth consideration of the draft COPASAH Charter and Call to Action, as well as other geographic-based discussions. In a pivot from most global health conclaves, the vast majority of participants hailed from the Global South. That said, no one came from the Arab region, North Africa, nor from so-close-yet-so-far Pakistan, whose accountability proponents are perhaps still awaiting Indian consideration of their visa applications.

Interesting discussions focused on the concept of “the community” and how we use and interpret that term. As health activists and researchers, we seek to empower communities to own their health systems, and social accountability is a critical tool in this respect. Several speakers acknowledged that such efforts typically entail extraordinary burdens on already time-stressed, resource-poor communities. Walter Flores and others from CEGSS/Guatemala described real success stories, but others questioned how long such types of successes could be sustained without larger systemic changes. As one counterpoint, Jane Nalunga of SEATINI/Uganda described how reallocation of power in decision-making, funding and provision of health services from the state to private sector actors and donors continues the exclusion of communities from information, decisions and feedback regarding their health care.

Further, the “community” is of course heterogenous, with constituents who work against health equity. Renu Khanna of Sahaj in India, Borjan Pavlovski of ESE/Macedonia and others pointed out that the oppressed are often also the oppressors. Borjan described how members of the marginalized European Roma groups who assume health liaison roles subsequently behave as if they were part of the dominant majority, heaping disrespect on their ethnic compatriots. Renu noted that gender-based violence and discrimination is produced first in the home, then reinforced in the community. The question of balance in empowering communities while also countering the patriarchal, misogynistic, racist, communalist, casteist and chauvinistic tendencies of many community members needs further reflection and action.

Anuj Kapilashrami of Queen Mary University London and Jonathan Fox of American University’s Accountability Research Center challenged the term “accountability” itself as being too specifically Anglo-American and implying a transactional element akin to financial accounting. Citizenship was another concept held up for scrutiny. COPASAH and others employ the term to denote its rights-holding attribute, with regards to health and other social and economic rights. In common parlance, however, the term easily excludes undocumented migrants, refugees, foreign residents and minorities whose claim to formal citizenship is uncertain or even threatened. An assertion that COPASAH’s interpretation includes all peoples in the concept of citizenship did little to resolve the point. Even in the Symposium’s final plenary, with a search for a slogan to capture the momentum of the accountability movement, the best that could be found was the old stand-by, “Nothing about us, without us.” That search continues.

A clear addition from the regional discussions was a demand for greater focus on corruption in the health sector. That issue, championed by Latin America and Africa, pointed to both high-level misappropriation of funds as well as so-called “petty” corruption that affects the poor most directly. Discussions centered on how civil society might balance its advocacy for health workers against the reality that many health workers are also engaged in corrupt practices, such as taking bribes, charging for “free” services, redirecting patients to private pharmacies or facilities in which they have a private interest, and so on. Participants from India added examples about health care providers at high-profile corporate hospitals who order irrelevant tests and medications for terminally ill patients, playing on their and their families’ desperation for both care and cure. Discussants from East Africa described anecdotes of kickbacks from these Indian corporate “healthcare” chains to African physicians who referred patients to them. Given that these corporate hospitals market themselves as medical tourism destinations, the regional discussions raised possibilities of coordinated action between Asian and African civil society on highlighting the corrupt practices of these for-profit hospitals in India, to counter the image of quality and professionalism that they use to recruit patients from Africa. It was interesting that the issue of health systems corruption emerged simultaneously from diverse practitioners as well as in IJHPM, as noted in last week’s IHP newsletter and elsewhere (thanks to Dina Balabanova and others).

Universal Health Coverage (UHC) was repeatedly cited as a prime example of a gap in social accountability in health. In multiple sessions, participants from Latin America and Africa highlighted tokenistic public consultations, and no feedback mechanisms, in the rollout of UHC in their countries. More importantly, the role of UHC in transforming weak health systems in LMICs into financial jackpots for corporatized health providers demonstrates the absence of social accountability in what the UN system and its NGO partners have hailed as the largest health-focused initiative in history. From the International Budget Partnership, Mokeira Nyagaka, Brendan Halloran and Priyanka Samy underlined the need for budget watchdogs, including skills sharing among civil society and lay groups, to track budget commitments and expenditures that take place under the guise of UHC. The accountability gaps in UHC provided occasional segues into explorations of the social, political and commercial determinants of health, the SDGs as well as the linkage with climate change, the last point driven by the unstoppable Louis Reynolds of UWC/South Africa.

Rajat Khosla (WHO), Vicky Boydell (Graduate Institute, Geneva) and Gita Sen (PHFI) expanded on the interplay of social accountability with sexual & reproductive health rights and gender, in that the latter demands rights beyond health, such as dignity, and not simply the highest attainable status of health. From Columbia University, Marta Schaaf excorciated the “Global Gag Rule” as restricting not only safe abortion but also disrupting integrated functioning of health systems in LMICs. Asha George of UWC/South Africa, Anu Joshi of IDS in Sussex, UK and Masuma Mamdani explored research on social accountability. Research methodologies often perpetuate unequal power relationships and require newer approaches.

A need for systems thinking

An emergent theme from the Symposium was the need for systems thinking on questions of accountability and governance in health. Several participants had described state reprisals against health activists, as well as the retaliation by local providers against patients or community members who raise their voices against poor service quality, sexual harassment at clinics, or basic non-attendance by physicians at government health facilities. Steps to improve social accountability for health were seen to be helpful, but analogous to the use of a set of tactics in the absence of a clear strategy. The systems perspective suggests that those who advocate for greater accountability in health are a threat to the prevailing system that perpetuates inequalities in health. That iniquitous system responds against greater social accountability and reorganizes itself to oppose change. As Arial Frisancho of CMMB/Peru noted, the rise of reactionary politics in Latin America (and globally) involves right-wing leaders decrying mistakes by earlier progressive governments as a justification to impose an anti-poor agenda in health. Further creative thinking, matching grounded experiences with progressive research, will be needed to develop a clear outline of an alternative system promoting health equity, so as to guide the tactical efforts of social accountability practitioners.

As the Symposium closed on 18 October, Abhay Shukla, Aminu Magashi Garba and I presented drafts of the COPASAH Charter and Call to Action for review and comments in plenary. Comments are being collected from the symposium participants until 31 October, after which the COPASAH Secretariat will publish the final documents. The Charter is intended to provide guiding principles for social accountability in health, while the 2019 Call to Action lays out the next steps for the health accountability field for the next several years.

Ravi Ram is an independent health systems evaluator/researcher. He is an active member of the People’s Health Movement and the African Gender & Development Evaluators’ Network, as well as a board and steering committee member of the Kenya Health NGOs Network and the Health Workers for All Coalition. He can be reached at ram@jhu.edu, phm.esafrica@phmovement.org and @ravimram on Twitter. 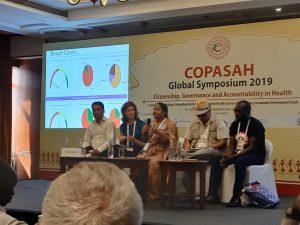 Spotlighting the role of courts in health policy processes: The role of the Delhi High Court in COVID-19 policy formulationKey features of an uplifting global health collaboration and work environment: From two mid-career African health experts.Are we really ‘one’ in ‘One Health’?Time to Rethink Global Collaboration: Travel restrictions for global health professionalsEV2022 in Colombia: On keeping Emerging Voices innovative, disruptive and relevant
add a comment
Cancel reply
3 comments

Thanks for this very nice summary, Ravi Ram.