Through winning a crowdsourcing writing contest organized by SESHGlobal, I was fortunate to attend the 2nd annual Women Leaders in Global Health (WLGH) Conference held in London on the 8th and 9th of November 2018 at the London School of Hygiene and Tropical Medicine. I was one of 6 finalists (out of 311 submissions) who had proffered the top 6 solutions to improving women’s participation in the WHO-TDR Fellowship. The Fellowship supports researchers and key members of clinical trial research teams from low- and middle-income countries (LMICs) to acquire specific skills in clinical research and development through placements in pharmaceutical companies, PDPs and academic affiliated research institutions.

There was a commonality among the challenges and the solutions we discussed in informal TED-style approach; but the most well-received by representatives of WHO and TDR, Dr. Pascal Launois and Mariam Otmani Del Barrio (who sat on the panel to listen to us) were the following: profiling past fellows in a way that made them relatable, enhanced communication through the social media, use of formal and informal and informal women’s networks and support through the application process. It was the highlight of my career year to have Jocalyn Clark from the Lancet, Karen Goraleski of ASTMH as well as former TDR Fellows who sat on the panel state that our discussions resonated with them and truly pushed for our ideas to be actioned.

As an alum of LSHTM via Distance Learning, it was especially touching for me to physically walk the hallowed halls of the School and meet in person Dr. Heidi Larson ( Director of the Vaccine Confidence Project, LSHTM) and Prof. Peter Piot (Director of LSHTM) (whose work I’ve read and read about, watched lessons and lectures they’ve delivered, from whom I’d received countless newsletters, and have followed closely and admired during my time studying at LSHTM).

This year’s event had over 700 participants (with 400 on a waiting list) attending the conference; the rooms were pulsing with the energies of women (and a handful of men) of all ages and races from global health and other cross cutting sectors who had gathered to inspire and be inspired by an impressive lineup of speakers that included well known leaders in Public Health such as Joanne Liu (President of MSF), Dr. Soumya Swaminathan (Deputy Director-General for Programmes at WHO), Peter Piot (Director of LSHTM), Dr. Agnes Binagwaho (Vice Chancellor of the University of Global Health Equity in Rwanda and Senior Lecturer at the Department of Global Health and Social Medicine at Harvard Medical School), Dr. Patty Garcia (Former Peruvian Minister of Health), amongst many others. Young Emerging leaders such as Temie Giwa-Tubosun (Founder and CEO of LifeBank), Anysie Ishimwe (Global Health Corps fellow, Gardens for Health International) and Constancia Mavodza (Clinton Health Access Initiative in Zimbabwe) were among the roster of many young panelists to share anecdotes and give talks that electrified the room and shone a light on the potential of young women who are paving a path for themselves whether or not they are being seen or heard. 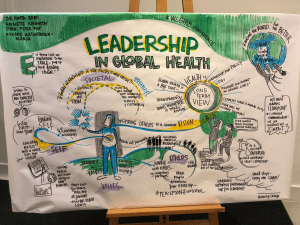 One of the many successes of this conference was the commitment to mentorship of young emerging leaders; it was evident by the number networking opportunities that were on offer. The established women leaders repeatedly and constantly challenged one another to take on mentorship roles starting from Day 1 of the conference. At every break or opportunity, there would be milling crowds with mentors and mentees networking furiously, culminating on Day 2 with a mentorship breakfast where mentees were paired with mentors to engage with. It was honestly amazing to see and benefit from these leaders who “walk the talk” in practical terms by dropping down the ladder to the next generation. It is then acknowledged that one of the keys to gender parity is women leaders creating enabling environments for other women to find their own space at the table in the leadership arena.

I was surprised by the absence of men at these opportunities for mentorship as it presents a gap. Kent Buse and Sarah Hawkes presented the inaugural GH50/50 Report which reported what is the present reality, that currently men hold over 75% of leadership positions in health in a field where over 75% of the workforce is female. Therefore, to get a shift in the current paradigm, these opportunities must include men who hold these power positions and include them in these mentorship responsibilities. Gender parity needs to not just be considered within organizations but also at conferences like these so that the conversations are more nuanced and balanced. Then, opportunities for young leaders will be infinitely vaster.

Aside from the gender parity gap, there is also a distinct paucity of representation from the Global South in the leadership of WLGH. An article was written about it in the BMJ the day the conference started, which at the time of reading I thought rang harsh and was possibly taking away from the gender equity agenda. But it was hard to miss, and the lack of inclusive representation at the top level also did not allow the lens to widen sufficiently in discussions surrounding culture and gender norms. While mentorship is indeed an important strategy to achieve gender equity, we need to constantly reflect on not only the forces that push women down, but also on the forces that prop them up especially within positions of power and privilege. It will need taking an urgent look into adopting a more intersectional approach to addressing gender issues. 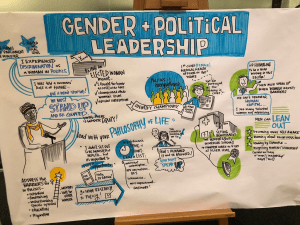 Still, there is much to be expected as this initiative is only two years old. There is a lot of promise for the 3rd edition which will take place in Kigali, Rwanda next year. This was announced by Dr. Agnes Binagwaho with a lot of excitement and fanfare. She ended this year’s conference on a high note stating that “we [global south] need to scream more and have our friends in the West and North scream with us” to break the many barriers that truly negate gender equity and fair partnerships in institutions globally.

For me, this conference (and others like these) hold the key to what can be achieved when a group of people come together to challenge the status quo. As reported recently by Buse and Hawkes of GH50/50, the tide does seem to be turning and the gender agenda is firmly set now; there is no turning back now. It was acknowledged that in some areas change will be incrementally small while in other areas it will (have to) be a large and obvious leap, but in any case, each change, whether small or large, will continue to be celebrated at this forum, together with other likeminded individuals, whilst continuing to advocate for and encourage gender parity.

Dr. Helen Anyasi is a gender enthusiast, a SESHGlobal Crowdsourcing contest Awardee to the WLGH'18. She works with FHI360.