Subscribe
Home > blogs > WHO at the crossroads: a few reflections on a recent workshop in Berlin
blog

WHO at the crossroads: a few reflections on a recent workshop in Berlin

I was at “The WHO at the Crossroads”  workshop which took place in Berlin last week, as an IHP correspondent, and for someone who is relatively new to the global health governance debate, the meeting was very “educational” indeed. Broad themes of discussion on the day were amongst others, the politics and architecture of aid and global health actors; the history of UN organisations (including the WHO); the (unfulfilled) promise of Alma Ata; and current crises and threats to the right to health. Fascinating stuff, and I certainly did not mind the fact that it all took place in Berlin, a city with so much (sadly, often tragic) history.

WHO is an intergovernmental organisation with a central mandate that is focused on the protection, promotion and preservation of health globally, and although it has never been fully independent in its long history (even in the mythical times of Alma Ata), over the years, it has nevertheless tried to be a relatively autonomous policymaking body in global health governance and with respect to its normative functions. The panel and audience in Berlin were truly diverse! There were public health experts in the room, students, teachers of international health, journalists, writers, correspondents, representatives from civil society bodies and even some former WHO employees. The workshop dwelled on the past and present of the WHO and how its independence, legitimacy (representation and accountability are among the key factors legitimising the institution), and power to control (or at least substantially influence) the global health discourse are at stake now. On the one hand, the WHO’s constitution and landmark declarations like Alma Ata where health was declared a human right, give the impression that it has maintained its original stance and founding values, on the other hand, the organisation’s increased association with big corporate actors and philanthro-capitalists, speaks volumes about an ongoing internal ambivalence, even raising questions in some quarters about its integrity, in spite of the FENSA framework in place. Yes, you can argue that in the past the Rockefeller Foundation was also influential in public health programmes, but this appears to be an altogether different “multi-stakeholder” era. We seem to have reached ‘Peak Partnership” times.

Conflict of interest (CoI) issues are not limited to direct or indirect associations with profit-making organisations but run deep in the organisation. There are also concerns about the integrity and CoI of some members appointed for the WHO’s High Level commission on NCDs. The controversy surrounding the appointment of Mugabe as an NCD goodwill ambassador by the WHO is also still “fresh”, and this was flagged as a pressing issue which undermines the ability and legitimacy of the WHO as a coordinating agency for global health.

In this complex and difficult environment, the biggest question seems to be, how can the role of WHO as the central institution for global health rights and policies be resurrected? Or perhaps more aptly, these days, how can the WHO be(come) the “Queen” in the global health beehive, to quote a recent paper in BMJ Global Health; acting as a “meta-governor” in global health governance, and thus also injecting some (much needed) accountability into an otherwise rather unwieldy mix of global health actors and ‘stakeholders’? If not, the global health universe may continue to expand in all directions (and perhaps a few alternate universes as well), and we may see many more “World Health Summits” being held in parallel to World Health Assemblies, and ever more global health reports & Lancet Commissions that analyse in detail all the worthy global health causes, without producing a clear roadmap on how to tackle them in a holistic & systematic way.

The hope remains that the WHO can play the ‘integrator’ role in the SDG & planetary health era, in an arguably very volatile international environment facing huge geopolitical and other shifts, even if over the years the WHO’s dependence on donor agencies has only increased, via earmarked funding amongst others.

So, one obvious question is, “what should be done to reverse the tide?” As emphasised by the panel, the recent proliferation of global health initiatives has created a need for greater coordination and alignment at country level; member states also need to be more transparent and ethical. An expert panellist in the workshop said “the horse rider is as fast as his horse”, with the horse rider ostensibly being the WHO, and the member states, the horse (the WHO’s ability to run and lead in global health is contingent on member states). Still, I wondered, “is it really all about the member states?”, in a way, from my perspective at least, the WHO can always disagree and even disagree publicly with propositions that go against its values and constitutional mandate (even if it might not be ‘politically savvy’ to do so). The role of the WHO has changed over time, and the current scope arguably feels a bit too broad (in line with the ever expanding global health agenda), but that doesn’t mean the organisation should settle for a mandate that is restricted to just coordinating preparedness and response to emerging infectious diseases (as is desired by certain actors and member states).

The focus needs to be on setting strategic priorities, facilitating ownership by member states (including assisting with decentralisation in many multi-level/federal member states) and calling upon them to increase assessed contributions, although so far most don’t seem to be “answering the phone” on the latter issue. This week’s rather underwhelming response of member states at a pledging conference on WHO’s Emergency Contingency Fund demonstrates this, and with such a weak response to existing (health security related) commitments, one can imagine how keen they are on increasing assessed contributions.

Arguably, in today’s “multi-order” times and with the current gridlock in global governance, a substantial increase in assessed contributions might seem unrealistic. But let’s keep the brave young Americans in mind who are also trying to break a seemingly insurmountable gridlock.

Reforming the WHO’s governance structure and emphasising its leadership role alone won’t be enough, reforming finance and partnership structures are equally important, certainly against a backdrop of growing associations with non-state actors. The implementation of FENSA, is for instance, to be watched closely; one does not want the likes of Bloomberg, Gates & others running the (WHO) show altogether, let alone some of the less benign corporate actors lurking in the NCD background.

As described in this workshop, many member states seem to have lost their appetite for real change in the WHO, and this includes a changed role in global health governance. However, to resolve the current conundrum in global health governance, a clear roadmap and a strong policy stance regarding the engagement with member states and other non-state partners are urgently needed at the WHO. Non-state actors with a good “public interest” and those with “no interest at all” (or worse) need to be clearly differentiated from each other, and the financing of these organisations needs to be scrutinised in greater detail. Strengthening and empowering community/citizen engagement and promoting a real dialogue with community organisations is also important, and member states should all support this move to involve civil society more, rising above their political and other differences. We are nearing the end of this piece, so I hope you’ll allow me a bit of dreamy idealism! Finally, being the global body for health, with the DG envisioning “a world in which everyone can live healthy, productive lives, regardless of who they are or where they live”, it is high time the organisation helps speed up the death of neoliberalism and austerity (for public services, that is). Again, there is not much appetite for that, as many member states don’t allow the WHO to take such ‘politicised’ positions. But let’s just wait until Comrade Corbyn (and perhaps also Comrades Sanders/Biden) are in charge in the UK/US!

All in all, the debates I attended in Berlin and the concerns raised by panellists and people in the audience were very significant. These sorts of analyses can inform an action agenda which can in turn be used to engage with the WHO and its reform process.  Having become much wiser, I then indulged in a bit of sightseeing in Berlin, a city with a history which I hope has also made humanity a bit wiser in the previous century. 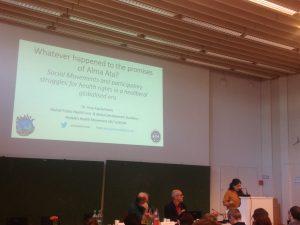