Despite some undeniable successes, by and large the South African (SA) health system has failed and continues to fail most of the very citizens it is meant to serve. Yes, the challenges are enormous given the legacy of our racialized past (Apartheid) but there are plenty of present day issues for which the country is fast running out of excuses e.g. poor quality of health services, drug stock outs, corruption, or even the fact that –  although the country faces a skills shortage of health professionals – many  pharmacists and clinical associates are not absorbed by the public health sector and remain unemployed.  In addition, we are also facing a leadership crisis – our current President (Jacob Zuma) is considered to be “the Donald Trump” of SA (or is it the other way around?).  Even the health system is not safe from the type of “leadership” which governs the country – I’m referring here to Member of the Executive Council (MEC) of the Gauteng provincial department of Health, Qedani Mahlangu. Ex-MEC Mahlangu, now, thankfully, after she oh so ‘beautifully and consciously’ steered the Gauteng province straight into several disasters, most notably the inhumane deaths of the 94+ mentally ill patients, reported worldwide recently.

If there is one ‘must-read’ for every health systems researcher, the broader public (national and global) and politician ( be it Zuma, Mahlangu or any of those politicians who failed to even observe a minute of silence last week), it is the damning report released by my new personal hero, the health ombudsman – “The circumstances surrounding the deaths of mentally-ill patients; No Guns 94+ Silent deaths and still counting”. Actually, to be accurate, ex-MEC Mahlangu continued in her post (with no doubt a fat salary check and gravy train benefits) and waited up until the 45th hour to resign, just in time for the ombudsman report to be released – many interpreted this as her way of avoiding being accountable. Opposition parties in the country are calling for criminal charges to be laid against her and rightly so, though it is yet to be seen if they will indeed materialize or whether she will just be like every other leader in the country who gets away with murder (and seriously no pun intended). On Twitter the saga is referred to under the hashtag #LifeEsidimeni. In addition, the media and other researchers have documented in much detail how the Gauteng department of health in SA transferred in just nine months (March-December 2016) – what was initially thought to be 36 but now already – 94+ mental health patients to Non-Governmental Organisations (NGOs) who operated under invalid licenses and who treated patients like animals, beat them and starved them. Yes, you read that right: ‘beating patients and starvation’. The crisis is no less than a “massacre of vulnerable populations”, borrowing a leaf from an opposition Member of Parliament (MP),  last week in parliament.

When I sat down to read this report the inhumaneness left me chilled, in tears because I questioned how we in public health have allowed this disaster to happen. Moreover, the situation hit home – it got me thinking of a family member I once had in a state psychiatric facility and as I quote the report (see below) I can’t help but think of the millions of equally vulnerable people worldwide and in SA who are still reliant on clearly suboptimal healthcare facilities.

“Two hours before Freddie Collitz (61) passed away in the care of the Mosego Home in Krugersdorp, an old age home for psychiatric patients; he apparently had a wound to the head, blisters around the ankles and a sore on his nose”.

“One day Riaan (30) the youngest son, insisted to take his father inside. There were no sheets, pillows or blankets on their beds”. 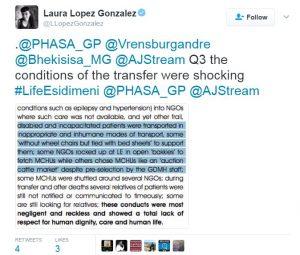 Yes, there has been significant and notable advocacy and an outcry by organisations such as Section 27, or other researchers in the public health community and even the media, yet politicians as per the report still went ahead with transferring patients and contributing to their eventual, unimaginable, unethical and unacceptable death. In a country with one of the most progressive constitutions in the world (and still boasting the second largest economy on the African continent, let’s not forget), we have let down our most marginalized through our failing health system. A horrifying human rights breach, with criminal consequences.

The sad episode points to three areas we need to consider urgently. The first is related to our research which is meant to protect patients.  This raises the long-standing question of our role as researchers in addressing political disarray and poor leadership (aka, “Trumps of the world and SA”) which clearly impact our health system in one way or another. Is it time we rally behind civil society groupings such as Save South Africa or even run for office ourselves instead of allowing poor leadership to reign and blatantly carry out massacres?  Young researchers in the US can probably relate to our predicament.

Second, cost-cutting was the key reason cited by the health department for this massacre. This shows the continuing fight of not just mental health patients but the high costs of caring for disabled populations in general; sadly, instead of curbing corruption in the health system or other wasteful expenses, “cost-cutting” here compromised the human rights and care of the 94+ and counting.

Thirdly, and I bet my PhD on this, once this crisis falls off the hot-off-the-press list of topics (in the media and research arena) as with Ebola (which is now a far, far away and distant memory), will we simply move onto the next crisis instead of resolving our systemic issues? And is this why, despite research and donor funding, we still have ailing systems? The 94+ / #LifeEsidimeni crisis is an indicator of the systemic issues which persist in the SA health sector i.e. poor quality of patient care, huge inequities, …

And it is a marker of what is yet to come if we, being politically correct, fail to address the massive public-private divide in the country and continue to move from one “hot” topic and buzzword to another.