Subscribe
Home > blogs > What does it take? Creative disruption and visible buy-in from current leadership (my take on WLGH18)
blog

What does it take? Creative disruption and visible buy-in from current leadership (my take on WLGH18)

“Our ceiling must be the floor of those who come after us”.

“If you don’t get a seat at the table, pull up a folding chair and if they won’t let you, just sit on the table”

“When a man interrupts you, keep talking. Don’t make an eye contact & pretend you didn’t hear anything. Just keep talking”

‘Women don’t have to break through a glass ceiling, they have to get through a big fat layer of men’

These and other creatively disruptive statements (the best coming from the fearless Nigerian humanitarian coordinator Ayoyade Alakija –“we are in dangerous times if we do not understand better leadership”) made it all worth to take my (slightly bruised) ego to London for some collective therapy, which is sorely needed. Lately, I realize even more how much pressure there is on some of us, to combine, and have it all. That’s why I think the mentoring and networking was one of the highs of this annual gathering. I attended a mentoring breakfast meet as a mentor where all those things were discussed that you normally do not admit to, and useful tips were exchanged. The WLGH has set in motion a number of country and regional chapters where networking events will be organized, lists of women in global health compiled,…(I think that women engineers also did something similar – might be worth checking out!)

I also noted the intervention of aid worker Lucy O’Donoghue who spoke about her facebook group bringing together moms in global health (see Aidmamas and Humanitarian Women Network)…helping each other how to combine far flung travelling, 24h social media presence, …and standing at the school gate at 3:30 pm.

Therapy and personal mentoring & networking aside, some thorny issues still remain. Despite the huge step of including mentoring to the conference, I am still waiting for those major advancements or that maverick organisation that cracked the puzzle. I belong to those that are not convinced things will just evolve organically. Waiting for generations to change, seems like a light years-approach compared to today’s fast paced, everything-happing-now environment (cfr: maybe we will land on Mars earlier than…). Just waiting is losing out, or, in another twitterable statement heard at WLGH18, “we need a gender shift, not just a drift”.

There also seems to be something still very masculine (“on the front stage, loud mouth, heroic, aggressive”) about our standard perception of leadership that we have not come to grips with. As leaders, following the panel on “a cultural lens on gender & organisational leadership”, we need to foremost acknowledge that we have the privilege of position and need to acknowledge who brought us there and who we are intended to serve. This kind of humility, recognizing that we cannot do it alone (see also H. Clinton’s “it takes a village”) recognizes that we are only as strong as our communities, it counters that fabulous “lone hero” image…

What does this mean for women working in global health? They should avoid pointing the finger to other women (labelling someone “bad mom”) and try to be supportive instead…all too often, some “ladder-kicking” happens in the rush to get ahead. It also means you are speaking for the frontline providers, the grassroots organisations and communities… In Kigali WLGH2019, I hope we can reverse the image /perception that the objective is (to get more) women in leadership positions, while it is much more than that, encompassing a shift in values, discourse/voice, ways of doing, of working, which is much more inclusive and egalitarian than what we have today.

And what about exercises such as the UK’s  Athena SWAN   (a charter established in 2005 to which research institutions commit to advance gender equality and address unequal gender representation) to promote diversity in science ? They might come down to box-ticking exercises, however, their (real) power might lie in reframing the discourse, and gently nudging everyone of us towards a culture change, without too much pain for everyone involved…

Is the private sector doing any better? Compared to other global health gatherings, there were quite some representatives from the private sector and from corporate philanthropy, such as Novartis Foundation & Johnson and Johnson Global Health. Although the private sector portrays the same picture in terms of gender in the 50/50 Report as the UN and the private not for profit, they seem to publicize their initiatives to promote gender equality better. However, nowadays, we should always ask what concrete there is behind the nice tweet. The hard nut to crack, and not stressed enough during this gathering is the importance of vision and of organisational culture, carried by whoever is perceived to be the leader in terms of values in the organisation. In order to have bottom up, distributed, networked, 360-degree leadership and whatever-you-name-it, you will need a turnaround in culture and some concrete action that will (hopefully) set in motion a positive cascade. Maybe bring some organisational culture expertise in next time, so we can take a real deep dive. We need more examples next time from organisations (and why not, organisational research?) and leadership in WLGH19 Kigali on how we can make this happen, next to the very appreciated networking and inspirational therapy. 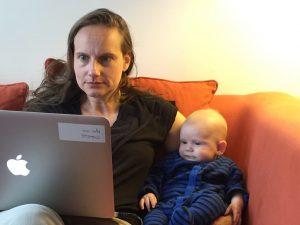 Trying to do it all 🙂 / My ceiling is her floor