We cannot have post-COP 21 depression

It may already be a month since the world’s governments, at last, after 20 years of fancy (and I hope carbon-neutral) conferences, arrived at an agreement for global climate action, but people are still talking about COP 21 – which is a good thing because most UN conferences end up vanishing in oblivion and then suddenly re-emerge in politicians’ consciousness when an important anniversary is about to be commemorated. Upon my return to the Philippines and even during the Christmas break, my email inbox almost exploded due to the barrage of articles and press releases (well, partly my fault because I subscribed to numerous climate-related mailing lists). This week I came across a compendium of the 34 “best pieces” on the Paris Agreement – not sure if they really are the “best” (and the compiler made a caveat that it’s not meant to be a “balanced” spectrum of opinion and they are “personal choices”) but still a worthwhile read for anyone whose 24 hours aren’t even enough, like me. 😛

Let me pick some of the titles from this collection that caught my attention: “Paris deal: Epic fail on a planetary scale”; “At COP21, the world agreed to increase emissions”; “COP21: in spite of the show, the glass is 80% empty”; “Talks in the city of light generate more heat”. The Guardian’s George Monbiot perhaps sums up best the perspectives and interpretations of the essays in the collection: “By comparison to what it could have been, it’s a miracle. By comparison to what it should have been, it’s a disaster.”

The articles are in sharp contrast with the celebratory tone manifested in reports made by traditional media. Certainly, the authors cannot be blamed for the mixed emotions, perhaps more accurately leaning more towards the side of disappointment and despair. Of course, as early as now, many are doubtful of the accord’s implementation, especially with a global governance system that is notorious for flowery declarations, inconsistent enforcement, and weak accountability. But the text in itself is enough a cause for grave concern, from its weak references to human rights (the right to health is mentioned only in the preamble) and vulnerable groups (such as indigenous populations) to vague implementation mechanisms (such as raising the 100 billion USD commitment for climate finance). (For an easy-to-read analysis, see this infographic.) Countries may have reached an agreement at last, but we also know that the treaty did not reach the kind of ambition that science is prescribing and people are demanding, especially that “we aren’t just talking about the weather,” as this powerful poem delivered at the Climate and Health Summit says.

Fast forward, two days ago, I opened the New Year by giving a 2-hour lecture on climate change and health to an audience of around 500 medical students and faculty. In my talk, I discussed the projected health impacts of climate change (250,000 deaths annually beginning in 2030 and 7 million annually due to short-lived climate pollutants, according to WHO; reversal of 50 years of global health gains, says the 2015 Lancet Commission); shared my thoughts on how the health sector can, recalling the Hippocratic commandment, “do no harm” on both people and planet (Learn more about my organization, Health Care Without Harm, and our two flagship programs: Global Green and Healthy Hospitals and Healthy Energy Initiative); gave updates about the health sector’s presence at COP 21 (especially the successful Climate and Health Summit, along with numerous health-related side events); and even showed our selfie with WHO Director-General Dr. Margaret Chan, who after a climate and health side event that Lancet Editor-in-Chief Richard Horton hailed as “COP 21’s most important side event,” ordered us young doctors to actively engage with climate negotiators to ensure that health is central in the climate treaty. (In fact, the climate treaty is a health treaty!) 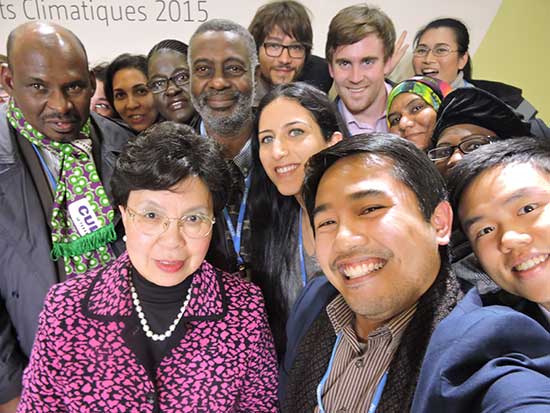 Do we look depressed? Renzo takes a post-COP 21 selfie with WHO Director-General Dr. Margaret Chan and fellow health professionals

During the open forum, a medical student asked me a question, quoting the eminent environmental scientist James Lovelock (originator of the Gaia Hypothesis, saying that the Earth is a single living self-regulating system): “He expressed early on that we should have addressed climate change decades ago, that it’s already too late to solve it, and so should we give up?”

Of course I was impressed that at least one medical student in the audience had been tracking climate-related literature (and I hope more health professionals will follow suit, and that climate change be incorporated in health professions curriculums), but also acknowledged that his was a difficult question. But I then used my doctor’s hat and responded: “When we are in the emergency room and faced with a severely sick or injured patient, perhaps with unstable vital signs, a large open wound or even two, we do not give up on the patient, right?”

I know it may appear a lousy attempt to answer a challenging query, but my fellow health professionals will understand where I am coming from. That is what makes the profession of medicine and public health, the vocation of healing, unique – we never give up. And in my work so far, I have personally engaged with health systems, hospitals, and communities, all never giving up and trying to tackle climate change to protect people’s health. For instance, we in the Philippines have started mobilizing the health sector for what we call “The BIG SHOW” – the transition to healthy, renewable energy that is not only necessary, but possible. Prior to Paris, we launched the Paris Platform for Healthy Energy, which laid out our proposals for addressing the climate-energy-health nexus. On the other hand, integrating climate resilience in health systems is very compatible with the universal health coverage agenda. 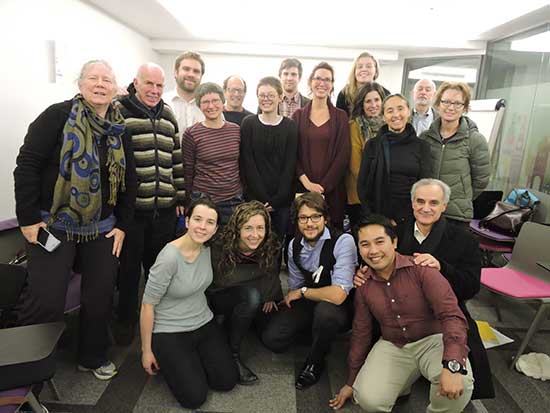 Indeed, much can still be done. I could say that the global climate and health community left Paris much stronger than ever before. Good thing that before we split ways, Dr. Maria Neira, the energetic director of WHO’s Department of Public Health, Environmental and Social Determinants of Health which manages WHO’s work on climate change and health, gave us a reminder in order to allay our fears and worries in advance: “After COP 21, we cannot have post-partum depression. We must begin developing a post-COP 21 plan for the health sector now.”

And so, to begin my personal post-COP 21 plan, shortly before flying back home, on the day after the adoption of the Paris Agreement, I immediately made a brief “side trip” to Rome to attend the Sunday Angelus at St. Peter’s Square to hear from the world leader who reminded us that climate change is, first and foremost, humanity’s moral crisis. From his small and distant window in Vatican’s Apostolic Palace, Pope Francis said: “With the hope that special attention for the most vulnerable populations is guaranteed, I exhort the whole international community to proceed on the path undertaken in the name of an ever more effective solidarity.” That in itself is enough a marching order for the future ahead of us.

Without post-COP 21 depression and with post-COP 21 inspiration, let us begin the grand work anew. Happy New Year to us all!

A 2014 Emerging Voice for Global Health, Renzo Guinto, MD is the campaigner for the Healthy Energy Initiative of Health Care Without Harm (HCWH)-Asia, director of #Reimagine Global Health, and co-investigator at the Universal Health Care Study Group at the University of the Philippines Manila. He attended COP 21 as part of the Philippine and HCWH delegations, and spoke at the Climate and Health Summit of the Global Climate and Health Alliance. 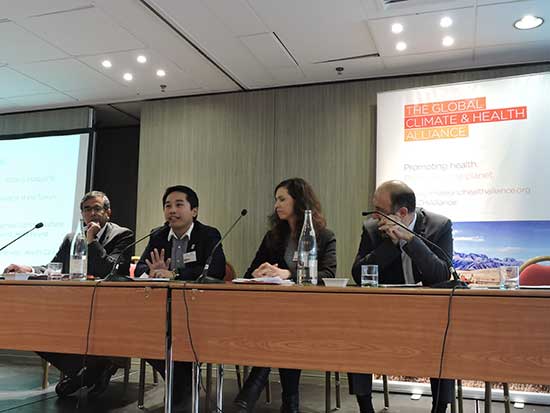