Subscribe
Home > blogs > Water is For Fighting Over
blog

Water is For Fighting Over

Mark Twain is often credited for the quote, “Whiskey is for drinking; water is for fighting over”. Despite the quote’s likely questionable origin, water is becoming an increasingly angry and thirsty elephant-in-the-room for world leaders. Tipped as the “oil of the 21st century”, will swelling water demands precipitate the levels of conflict seen with oil? Or can such an intrinsic aspect of human life avoid the geopolitical issues associated with the more volatile liquid? 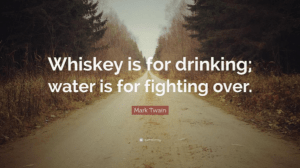 There is no denying the importance of water in global growth; a critical overarching ingredient for nearly all 17 SDGs in one way or another. Conversely, there is also no denying the current shortages and inequalities of water access across the globe – as of 2015, at least 1.8 billion people did not have access to water of high enough quality to be safe for human consumption. Additionally, a 2003 report by the UN World Water Assessment Program estimated that roughly 40% of the population had insufficient fresh water for minimal hygiene. Without intervention, the status of water requirements will only become more precarious with global demand predicted to increase by 55% by 2050. 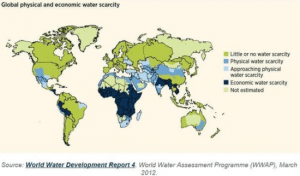 Hygiene and human consumption aside, agriculture, mining, industry and recreational needs for freshwater are ever-growing and integral parts of achieving the goals of no poverty, zero hunger, good health, and economic growth, for example. This places even more at stake for each nation in ensuring their future water requirements are secure, leading to understandable concern for ‘hydropolitics’ to result in conflict.

When further discussing his statement that water will be the oil of the 21st century, World Bank Vice-President Ismail Serageldin proposed that water may easily become a justification for war between countries “if the downstream nation is considerably stronger militarily than the one upstream, and the latter tries to block or reduce the flow of water”. 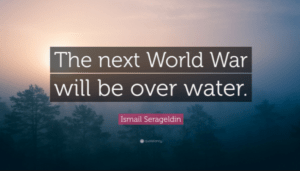 Scenarios similar to the one described by Serageldin have already been seen between India-Bangladesh, the ongoing Arab-Israeli conflict, and Egypt-Ethiopia over the River Nile. Regarding the former, in 1972 India built the Farakka Barrage, a dam constructed to divert the flow of the Ganges River to Calcutta during the dry season. Downstream, Bangladesh claimed that this led to the drying up of their own rivers. After several decades of temporary agreements and failed international lobbies, a 30 year-long treaty to share the water of the Ganges was finally agreed to by the countries in 1996.

Whilst no significant military-related conflict arose from this scenario (or several other hydro-hostilities), it has undeniably been an issue of political conflict between the two nations, believed to have attributed to decreased health and environmental outcomes in Bangladesh. Furthermore, it is certainly not a far stretch of the imagination to envision such a situation being used as justification for military action in even slightly different circumstances. Perhaps if military strength was just unbalanced enough between countries; if diplomatic relations between two water-sharing nations were already on a knife’s edge; or if a nation’s need for water had become exceedingly critical.

What would it take for a world water war to begin? What would it look like? Would other countries be able to step in and rescue entire nations from being deprived of a substance that has always seemed to be a basic human right? Many experts argue that water scarcity played a major role in the destabilization of Syria, and thus was partly to blame for the start of the civil war. So we have seen the way that water scarcity can affect whole nations, and perhaps it’s not that difficult to imagine an even larger scale crisis in the near future. 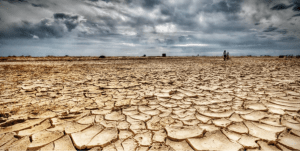 It must be a central priority for world leaders and international bodies to form and participate in some form of ‘hydro-diplomacy’. Whilst no simple task, preventing conflict or ‘water wars’ is undoubtedly a critical step in allowing greater focus upon water access and equality in the hope of achieving sustainable development goals. Finally, as Mark Twain definitely did not say, “In a world where drinking whiskey can be so well legislated, let’s hope fighting over water can be too”.

MD candidate at the University of Queensland

MD candidate at the University of Queensland