Sixty million people are now forcibly displaced globally and about 6% of people in low- and middle-income countries are further pushed into extreme poverty due to medical impoverishment. You don’t have to look far to realise how severe the “gap” is. Just look around: how many of the people you see have poor access to healthcare services? Exactly.

In recent years, universal health coverage (UHC) has become a buzzword in the global health arena, with Margaret Chan regarding it as the “single most powerful concept public health has to offer” – a global coalition is strongly pushing it further and the global momentum seems unstoppable. However, the road towards UHC remains difficult in many countries. Given finite resources, a critical issue on the path towards UHC pertains to deciding which services and policies to prioritize. As most of us don’t exactly live in a Garden of Eden (see the intro), hard choices have to be made. How countries make these choices was a key debate at the recently held Prince Mahidol Award Conference (PMAC) in Bangkok, given this year’s theme ‘Priority setting for UHC’.

Perhaps, if you’ve been tackling this area for a long time already, PMAC can seem initially like a reunion for many – on the first day, the “big ones” seemed very enthusiastic  to reconnect with their old colleagues! Yet, people were coming from different backgrounds this year – many academics, yes (many also from Health Systems Global), but also NGOs, civil society groups, journalists, and decision makers – all flew to the Thai capital last week to debate issues on priority setting for UHC. The diversity in the room was overwhelming. We all became impatient spectators, waiting for each high level panel of experts to traverse the treacherous pathways towards UHC and unravel their own practical recommendations.

So how do countries prioritize for UHC? Optimizing care using available finite resources requires the most effective health interventions to be evaluated properly. There is generally a strong consensus that Health Technology Assessment (HTA) including cost-effectiveness analysis is the main tool for critically evaluating knowledge; and hence, potentially leads to more informed decision-making regarding what health goods and services to provide in order to achieve UHC. However, a key question is whether HTA can really meet the high expectations and do what it claims to do. HTA reports may always include scientific evidence on cost-effectiveness, but they seldom take into account socio-political factors, as well as societal values that are also very critical for decision-making. The development of systematic and practical approaches to generate evidence on effectiveness of health interventions and on bridging the gap between such evidence and policy-making still remains a challenge. And thus we started wondering again: In priority-setting, whose priorities are we talking about? Since priorities may differ across countries, there is an extreme need to contextualize evidence and that evidence should be locally generated. However, demands for locally-driven HTA also require more investments – a further burden to many countries.

Yet, despite the lack of expertise in many countries, we learned how our colleagues have started to capacitate themselves in this highly technical field through hard work and painstaking commitment. The conference provided a precious opportunity to update our knowledge with insights from and exchanges with colleagues from world-renowned academic and research institutions such as the Thai Health Intervention and Technology Assessment Program (HITAP), University of York, International Information Network on New and Emerging Health Technologies and WHO among others.

The current crop of health economists and HTA fans also pushes for linking of inputs in the health system (i.e. money, capital, goods and services) with health outcomes. They aim to break the old habit of repeated budget spending cycles, routine financial administration and running of health service providers as an exercise of managerial prowess. They force us to think whether we are still making an impact on the health status of the population. And because of the explicit link between cost and health outcomes, we are compelled to spend resources wisely and get optimum value for our money.

Thumbs up for getting back in the field!

After long hours of listening to panels and being trapped in the four corners of the (admittedly, posh) Centara Conference Hall with the overflowing coffee conversations, we also got to see a bit of the Bangkok area. We didn’t engage in sightseeing, though. Six sites were available for us to choose from and we picked the Ramathibodi Hospital to see how Thailand manages essential high cost medicines.

We were very impressed at how logically Thailand has organized the steps for generating evidence of effectiveness of new drugs, including them in the National List of Essential Medicines (NLEM), and then introducing them in the wider health system. Equally important, patients shared with us their experiences and we also did a quick site tour of the pharmacies in the hospital. So we were reminded that priorities should not only be based on the budget thresholds of the government, but on voices of the people themselves – not far at all from our people-centered health systems discussions in Cape Town, isn’t it? Maybe there really wasn’t anything new, but it was definitely great to be listening to stories from the people themselves rather than seeing them just as a number or as part of a synthesis in a case study (so still, thumbs up for that).

As we strive to move towards UHC and make our health systems more responsive, a key challenge is: how can we improve transparency, multi-stakeholder involvement, ethics and human rights considerations in our decisions for the population? While predominant concerns revolve around which interventions to prioritize over others and whether it is acceptable to remove items from the current basket of services that are no longer cost-effective, we should not forget the dynamic changes and new challenges that will confront our health systems.

Hence, the Fourth Global Symposium on Health Systems Research (#HSR2016), scheduled for November in Vancouver, and its theme of “resilient and responsive health systems for a changing world”, will be a nice follow-up to PMAC. As Remco van de Pas pointed out in a previous blog on IHP, “the resilience discourse colonizes our political imagination. It hinders us to develop universal and strong systems based on the principles of health equity and to take action on the Social Determinants of Health”. It will come as no surprise that similar critiques were raised during PMAC. Priority setting exercises, while important, only take us that far, especially in the current, very unstable world. For example, now that we face a growing migration crisis all over the world and witness a surge of (post-) conflict systems, how should we address health equity for migrants? It will be interesting to see the dynamics across the different paths towards resilient, universal, and sustainable health systems. Can’t wait till Vancouver!

PMAC 2016 concluded with a “Bangkok Statement on Priority Setting for UHC”. Much emphasis went to building capacities across all sectors for evidence-informed UHC decisions. We were called to evolve from being spectators to becoming “architects for a better society” (as the PMAC laureates encouraged us to do). True, PMAC 2015’s resolutions didn’t sound all that different. We began writing this article pondering “what made our PMAC discussions unique this time?” and to our frustration we ended without a clear answer to that question. We may have been brainwashed into thinking that UHC is not just “old wine” in a “new bottle” (hopefully with a better taste), but the “triangle (or perhaps the cube?) that moves the mountain”. 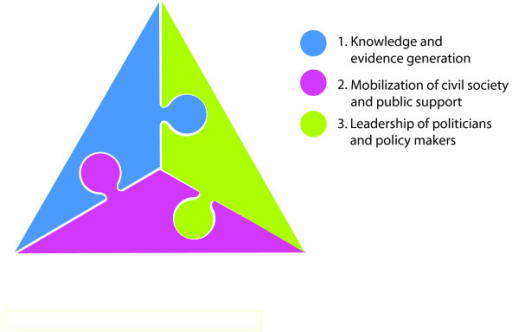 Can triangles really move mountains? We keep our heads up high for PMAC 2017 (again in Bangkok); next year’s theme, “ Addressing the health of vulnerable populations for an inclusive society”  sounds again very promising. As spectators turned (hopefully) into key actors in this battle, how high should we set the bar for UHC next year? The journey to Bangkok is rather long for us (but the warmth of their welcome and the vibrant and bustling city certainly make up for that!), but the fight for health equity has always been so much harder and longer. Hopefully next year, we can have more definite answers to what made our discussions at PMAC unique. We keep our heads up high that it isn’t just a never ending discussion. Meanwhile, see you all in Vancouver!

Erlyn Macarayan was part of the 2014 Emerging Voices program. She is interested in the areas of health systems, epidemiology, and infectious diseases.