Subscribe
Home > blogs > UHC Forum: Dreams of health for all or slogans detached from reality?
blog

UHC Forum: Dreams of health for all or slogans detached from reality?

It’s Thursday evening in Tokyo and the High Level session of the UHC Forum just closed, with Japanese calligraphy celebrating the ‘Health for All’ slogan. Over the last days,” Tedros” and “Jim” were at the centre of events, applauded as popstars, framed by a different celebrity ‘band’ at each session: Secretary General Gutierrez, Japanese prime, health and other ministers, the entire UN family (including WFP), the full spectrum of Development Banks, the Global Fund, Gavi and even Bill Gates himself (video cast)…

The music band reference is triggered by UNICEF starting off with a song on U–H–C. We did not end up dancing (it takes two to tango) but it was overall a very stylish whirling show, with its fair share of slogans and advertising pages for ‘disruptive innovation’ demonstrations and a ‘Business unusual’ fair (‘phones and drones’ someone called it).

Now you might suspect I’m not the singing kind (anymore) and maybe I didn’t feel in a festive mood -especially after reading the UHC Monitoring report which said we are seriously off track: half of people worldwide doesn’t have access to basic care and every year 100 million are pushed into extreme poverty by health expenses, just for starters. I cannot deny the major efforts to ensure this UHC Forum would be profiled as a new start, one of the grand, historic moments launching the UHC-movement.

Maybe that was exactly the problem: my head was spinning with all the smart slogans, the savvy VIPS and the utopian visions that were eloquently exposed. It left little space to discuss practical, real life problems and to come up with some concrete action points. People kept repeating that UHC was not about health only; it was about governments’ political leadership, multisector transformative initiatives and incentivising health investments by linking it to macro-economic ratings. But in fact it was all about health systems strengthening; rarely other contributions to UHC were mentioned- such as lowering costs for drugs, diagnostics and vaccines; the key role of community systems; policies of exclusion for non-citizens or marginalised or criminalised people; special needs for HIV, TB, malaria, severe patients needing hospital care… to name just a few.

Not a shade of doubt was allowed on the mantra that countries’ economic growth would now mobilise the necessary domestic resources for health. As such, risks of stalling expansion of service delivery or leaving anybody behind were left out of the equation. Any remaining gap would be tackled by ‘Innovative funding’ involving loans and banks, entrepreneurs and the private sector. I can’t help having second thoughts about this imposed optimism. To see health care as an economic investment implies exclusion of those patients without favourable return on investments. Pandemic preparedness and Global Health Security Agenda choose the threats (to who?) worthy of response, while devastating ‘local’ epidemics, such as cholera and measles in DRC or diphtheria among the Rohingya are likely to continue to be neglected.

We all need visions and aspirations, but an ideal cannot do without good, concrete, smaller yet essential actions. The human dimension risks to be lost, both making the individual feel insignificant (the bankers will solve it) and blurring the focus: people burdened with ill health and patients excluded from adequate care.

Moreover, civil society remains largely left out of the UHC dynamic. Several people expressed the feeling that the UHC forum and the UHC2030 initiative were too heavily government dominated. ‘Governments change, the people stay!’, a participant said, ’Without civil society we will not succeed’.

Some see similarities between the ‘UHC movement’ and Alma Ata, but yesterday someone reminded us that 40 years later we are still waiting for Health for All. Undoubtedly, the UHC ambitions can give renewed hope and drive, but songs and slogans alone will not change real life suffering. The invisible patients, the most vulnerable people, they will be the ultimate and only valid accountability test for UHC.

Anyhow, failure or success, opportunity grasped or missed, I was there, I have the WHO umbrella to prove it! 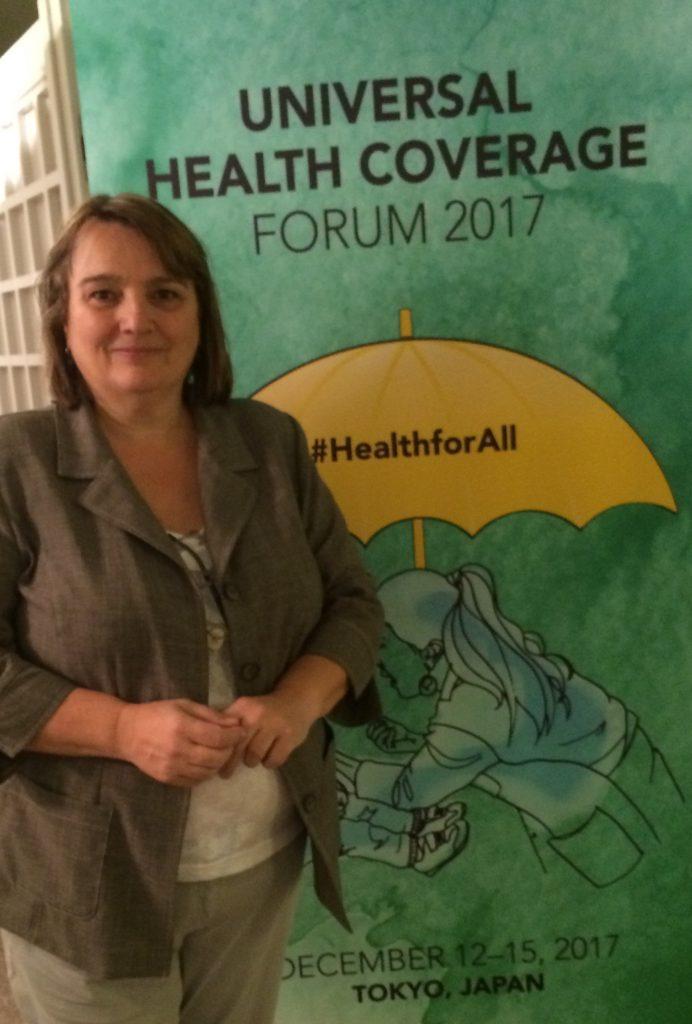 MSF and previously at ITM