Subscribe
Home > blogs > The World Health Organization’s response to Ebola: The devil in dealing with post-Westphalian pathogens is not (only) in the detail
blog

The World Health Organization’s response to Ebola: The devil in dealing with post-Westphalian pathogens is not (only) in the detail

The contrast has been remarkable, to say the least, between the in your face health & social situation in Guinea  – which I visited a few weeks ago – and the rather formal diplomatic discussions at the WHO Executive Board Special Session on Ebola last weekend. The heat in Conakry and the cold snow in Geneva were only partly responsible for this brutal contrast.

Last Sunday,  WHO director-general Margaret Chan  and David Nabarro, United Nations Secretary-General’s Special Envoy on Ebola,  both addressed country delegates during a historic WHO Board meeting.  There was a lot of press around and NGOs were also all over the place. WHO found itself once again in the spotlight, as it is the agency that should lead the international community to prevent and respond to pandemics. An emotional speech was given by Nurse Rebecca Johnson, who got infected while treating Ebola patients in Hastings, Sierra Leone, and survived the disease. Her final message was “Even though there is no certain cure for Ebola, early treatment is your best chance at survival.”

The relative lack of urgency expressed by the country delegates struck me, though. Sure, there was a lot of talk about the slow and inadequate response, and on how WHO quickly needed to  be equipped with the tools to respond swiftly and effectively to future outbreaks. The UK  even  ended its intervention with “Today is the day we must move from words to action so we never face this again.” Fine words, no doubt, fit for the occasion. At the end of a long day the Executive Board then adopted a resolution that should enable and strengthen WHO to respond to future outbreaks. Member State diplomats had negotiated for 3 weeks to arrive at this resolution, including at least one night session. So they have obviously worked very hard to reach this global consensus on how to respond to future outbreaks. The adoption of the resolution led to a cheerful ambiance in the room, with member states representatives applauding each other with the result.

The question is, though:  will this resolution really make a difference?

Charles Clift, from the Chatham House Centre on global health security already said that the devil will be in the detail.  In essence, this resolution is old wine in new bottles. It is a strong reminder that countries should implement their responsibilities outlined under the international Health Regulations  (as agreed upon by the World Health Assembly  in 2005). A 2011 IHR review committee made urgent recommendations after the Mexican flu (H1N1) epidemic in 2009, another so called “post-Westphalian” pathogen. It is basically these recommendations that countries are now urged again to implement in 2015, this time complemented by a commitment to support WHO’s central outbreak management. A core problem is that these recommendations are not (financial) obligations for states, so they can basically decide amongst themselves whether they like to provide funding for them or not.

I sincerely hope WHO will come out stronger after this latest health crisis. The structural problem is, however, that a Westphalian 20th century UN institution has to deal with 21st century post-Westphalian pathogens in an interconnected, globalized world. We have to start thinking beyond nation state sovereignty.

Finally, the United States asked for a memorial to honor all health care workers that have passed away during the Ebola epidemic. I think that’s a great idea and would like to make a humble contribution here, after my recent visit to Guinea.

In the two pictures below you can see the team of nurse Maria (excuse me that I didn’t note down her last name properly)  in a health post nearby Macenta, south-East Guinea. Their supervisor passed away a couple of months ago due to Ebola. A second picture indicates the working conditions of the team. 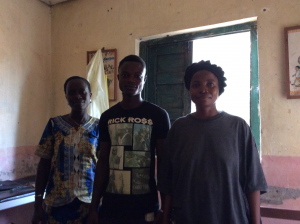 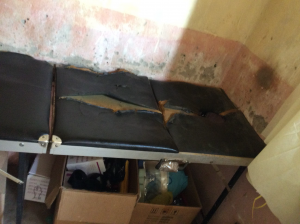 When this is all over, we will still remember these brave people and the dire conditions under which many of them were working.

One way to do that is by making sure that the resolution adopted at WHO’s EB special session on Ebola is properly implemented and sufficiently resourced this time.