Subscribe
Home > blogs > The WHO Global conference on NCDs in Montevideo, Uruguay: Towards an integral response to the epidemic of non-communicable diseases.
blog

The WHO Global conference on NCDs in Montevideo, Uruguay: Towards an integral response to the epidemic of non-communicable diseases.

A 46-year-old woman affected by a heart attack in Zimbabwe, a (male) heavy smoker aged 68 and recently diagnosed with lung cancer in Australia, a 52-year-old Indonesian man with neurological stroke sequelae due to long-term undiagnosed hypertension, …  All of them share underlying determinants and face the consequences of a rising global epidemic: non-communicable diseases (NCDs), as they are commonly labelled. These “socially transmitted conditions”—as some (other) people would prefer to call them—are  estimated to account for 63% of global mortality nowadays. It is predicted that they will account for around 70% of global deaths by 2030, if business continues as usual. Even more importantly, NCDs are also significantly related to preventable premature mortality and disability. Each year, 15 million people between the ages of 30 and 69 die from an NCD. NCDs are especially worrying for developing countries, where their incidence is increasing disproportionately. Four out of five deaths caused by these conditions already occur in low- and middle-income countries (LMIC).

A high-level organized response to the epidemic of NCDs has become a priority for the United Nations (UN) system since the Political Declaration at the UN General Assembly on NCDs in 2011. This was followed by the WHO’s Global Action Plan for the Prevention and control of NCDs 2013-2020 and the second UN high-level meeting (HLM) on NCDs in 2014. Another UN HL meeting will take place next year. Partly as a result of this high-level advocacy and attention,  governments’ NCD commitment is slowly increasing. Based on the nine voluntary global NCD targets proposed by WHO, some countries have set national targets for 2025 in order to attain the Sustainable Development Goal (SDG) 3.4: “By 2030 reduce by one third premature mortality from NCDs through prevention and treatment and promote mental health and well-being”.  Not enough countries, though.

The catalytic role played by the NCD Alliance (NCDA), which comprises the most important international disease-oriented federations but also hundreds of civil society organizations from around the world, has been very positive in terms of global advocacy and raising public awareness. Recently, the NCD Alliance changed its governance to keep pace with its growing and increasingly diverse network, as well as the evolving landscape it operates in.

In spite of increasing advocacy and formal political commitment, only one third of countries had national action plans on NCDs and/or national NCDs targets and indicators by 2015. Not surprisingly, the current decline in premature mortality from NCDs is still insufficient worldwide and resources for implementation remain scarce. The global failure to provide integrated and quality chronic care, indispensable to help decrease premature mortality rates from NCDs, has been associated with weak national health systems. The rising chronic illness burden demands a complex and long-term health system response. However, the majority of health systems, especially in LMICs, are unable to deliver and/or sustain interventions to tackle the main NCDs in an effective and equitable way. Current global efforts to implement interventions for NCDs remain very vertical and fragmented.

Against this backdrop, the WHO Global Conference on NCDs, held in Montevideo (Uruguay) on 18-20 October/2017 came thus more than timely. It aimed to enhance policy coherence between different spheres of policy-making that have a bearing on attaining SDG target 3.4 by 2030 and also offered an excellent opportunity to finetune the preparation process for the 3rd HLM on NCDs, scheduled for 2018. Unfortunately, the Conference was – at least in international media but also in the global health community – marked by the rather embarrassing appointment of Robert Mugabe, president of Zimbabwe, as a Goodwill Ambassador to fight against NCDs. Fortunately, a few days later, after increasing international criticism, Dr. Tedros changed his mind and  rescinded his appointment.  Not a day too early.

But putting aside the Tedros/Mugabe hiccup, it is clear that the Montevideo Conference on NCDs opens a window of opportunity to reinvigorate the international effort for recognizing and addressing the huge disease burden from NCDs and their socio-economic determinants, in the run-up to the HL meeting next year, and to focus on the establishment and follow-up of vigorous, serious and accountable country-level processes to scale up health policies and interventions on NCDs. As is usually the case, the conference produced a political declaration, entitled “Montevideo Roadmap 2018-2030 on NCDs as a sustainable development priority”. The Montevideo Declaration on NCDs is very comprehensive, however, and very much in line with whole-of-government and health-in-all-policies approaches; it also recognizes the importance of addressing the social determinants of health. The Declaration also acknowledges that private sector interests can conflict with public health goals in the battle against NCDs – yes, we know, that’s a bit of an understatement – and encourages to engage constructively with the private sector for NCD prevention and control. Moreover, international cooperation and implementation research are highlighted as pivotal for strengthening country capacities in prevention, control and surveillance of NCDS. Nevertheless, in spite of all this positive news, advancing the NCDs agenda at all levels will involve many challenges, especially those related with:

The global health community should closely follow and actively participate in the preparation process for the HL Meeting on NCDs at the UNGA in New York, next year. A paper recently published in Global Public Health entitled “Addressing NCDs: A unifying agenda for sustainable development” offers a comprehensive picture of the current NCDs situation and reveals that “despite the evidence that NCDs impede social and economic development, increase inequalities, and perpetuate poverty, they remain largely absent from the agendas of major development assistance initiatives”. That needs to change, sooner rather than later. At the very least, during the preparation stage and at the HL Meeting itself, we hope and advocate for a broad inclusion of scholars, international networks, patients living with NCDs, community and civil society organizations, especially from the Global South.

The battle to effectively prevent and control NCDs continues and we, the people, are part of the solution.  Let’s hope Montevideo will turn out to be a milestone on the tricky journey towards SDG 3.4. 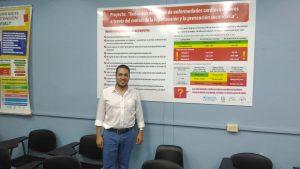