Subscribe
Home > blogs > The SGD Summit in New York: Being part of history and lovin’it!
blog

The SGD Summit in New York: Being part of history and lovin’it!

As a young researcher, I think we all can identify with the opening paragraph of our thesis or research articles which state ‘According to the Millennium Development Goals-MDGs’… Like it or not, the MDGs filtered down from the global level to shaping the research agenda and influencing planning processes at health facilities. The Sustainable Development Goals (SDGs) will undoubtedly have the same impact. 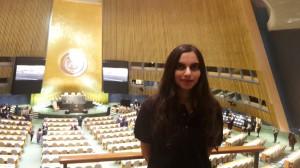 In June 2014, I was selected as a Future Leader at the European Development Days 2015 in Brussels. On a panel with the esteemed 69th President of the United Nations General Assembly (UNGA)-Mr Sam Kutessa, I boldly advocated for a ‘United States of Africa’ and drew attention to the challenges Persons with Disabilities face when accessing healthcare.  Subsequent to the Development Days, Future Leaders were quite excited to receive a once in a lifetime invitation to the historic SDG Summit in New York (25th -27th September) signed and sealed by Mr Kutesa himself. (Yes a letter directly from the President of the General Assembly- PS I’m still reading the letter every day)! 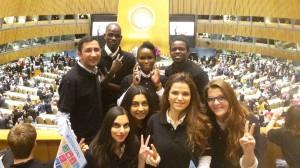 In addition to attending the opening ceremony, I signed up for many health and disability related side-events, little did I know the immigrations line at John F Kennedy airport would be so long that I would miss these events! I’m really counting my lucky stars that I made it for the opening ceremony! At the crack of dawn, 193 youth from across the world gathered outside the spectacular UN headquarters in New York. The morning started off with a meet and greet with UN Youth Envoy’s Ahmad Alhendawi and Noble prize Winner Malala Yousafzai.

It was extremely exciting to enter, to be seated at the General Assembly and to be able to spot the likes of Angela Merkel – it really does reflect a changing world, where youth are now given the opportunity to be included in high level meetings (even if it is at a snail’s pace). Pope Francis touched on a number of issues ranging from hunger to poverty and ethnic minorities. Algelique Kidjo absolutely rocked the UNGA with her performance and breathed life into the ailing ceremony. I was really inspired by Malala who stated that the world cannot change itself, we need to change it! While Malala is a fantastic representative of the youth, I do feel that youth ‘participation’ was not on the scale that it should have been, and that ordinary young people attending the Summit should have been given a larger platform to truly shape the adoption of the SDGs.  Perhaps at the next SDG Summit, when I’m old, grey and in charge I will ensure youth inclusivity and actual participation! Nonetheless, it certainly was an exhilarating and treasured moment to be part of history when the SDGs were adopted in the assembly.

Overall, it seemed that refugees, climate change and inequality dominated the focus of the Summit. It was great to see that under the ‘inclusivity’ banner, Persons with Disabilities were considered as part of the SDGs. On the other hand it was as if Ebola had never even happened and health was a minor goal. The critique is that a lot of the side-events and rhetoric at the Summit seemed to suggest that the MDGs were achieved. This definitely isn’t the case. In my view the problems and challenges outlined at the Summit are all the same, and have been the same for several decades, even if there has been some progress. I am doubtful that the SDGs will actually be effectively achieved; however, as a young person I certainly do feel the responsibility of ensuring that the SDGs are action-oriented and implemented over the next 15 years, it might be all we’ve got considering that close to 170 nations adopted the SDGs! 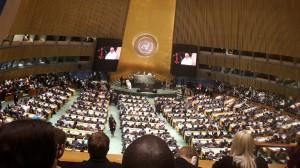