The Growing Importance of SDG 6 for Minimizing Conflict and Promoting Peace, Health, and Equitable Development

According to UN Deputy Secretary-General Jan Eliasson, “Water is one of the highest priorities for development and lives in dignity, as well as a serious factor in maintaining peace and security.” In fact, for centuries, water has been central in human, economic, and environmental development, but water was and still is a political tool for inciting conflict and leveraging peace. The combination of anthropogenic climate change, increased urbanization, increased human displacement, and mismanaging/diverting resources from improving infrastructure has threatened water security in many developing countries. Beyond life, water is a driving force behind economic, social and political stability, agriculture, and sources of energy. All of these factors make water an extremely valuable, controversial, and influential geopolitical tool. According to a 2015 report commissioned by the United Nations (UN), agricultural water demand accounts for 71 percent of the world’s annual water usage, and is highest in regions with some of the world’s poorest subsistence farmers, i.e. India, China, and Sub-Saharan Africa. Such stories demonstrate the clear intersectionality of the Sustainable Development Goal (SDG) issues, most obviously, poverty, food insecurity, and poor/unsustainable water management. Continuing with current practices, it is estimated that by 2030, “about a third of the 2030 population, mainly in developing countries, will reside in river basins where the gap between [water] demand and supply will be over 50 percent. The report [Table 5.2] thoroughly explains the role of water within each of the SDGs, as understanding these interconnections is essential for understanding hydro-politics, the national and international water policies affected by the availability of water and water resources, as the key to achieving a peaceful and equitable world. 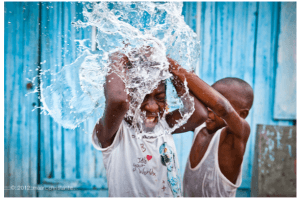 In arid regions such as the Middle East and North Africa, droughts and undependable supplies of clean water have led to and been further exacerbated by hunger, poverty, communicable diseases, and political, social & economic instability. For countries containing transboundary water sources, these shared bodies of water incentivize peaceful relations, but also contribute to regional conflict. As populations continue to grow and climate change reduces food and water security in these regions, these transboundary waters are becoming more valuable and possibly more contentious. For example, in the 1960’s, competition between Turkey, Syria, and Iraq to gain greater control over the Tigris and Euphrates rivers led to uncoordinated, hasty construction of dams for hydropower, irrigation, and drinking water purposes; the lack of transnational coordination has greatly stressed the river basin’s limited water supply, as well as allowed for ISIS to seize control of water structures in Syria and Iraq to cut off access to certain areas. While the civil war and formation of the Islamic State in Syria can be attributed to social, religious, and political issues, the preceding drought between 2006 and 2009 resulting in massive crop failures, forcing people to migrate from rural to urban areas, making the drought a contributing factor to the 2011 violent uprising against President Bashar al-Assad. Another example of a strong correlation between water scarcity and the rise of terrorist groups is Boko Haram in Nigeria. While the organization claims to operate on behalf of religious motives, many captured insurgents have been found not to be religious fundamentalists, but rather people displaced by severe drought from the neighboring Niger Republic. In Northern Africa, the relationship between drought and rise of religious fundamentalist groups has been a pattern since the 1980’s. In addition, the rapid shrinking of the Lake Chad due to global warming continues to cause violent conflict between farmers and herdsmen from the four countries that depend heavily on it: Chad, Nigeria, Niger, and Cameroon.

Using water scarcity as an opportunity for international cooperation instead of conflict, what Jan Eliasson called ‘hydro-diplomacy’, hence appears as essential. Sustainable development goals aimed at tackling issues such as poverty, human and environmental  health, gender equality, food security, economic growth, and more cannot be achieved without equitable allocation and access to sufficient and reliable sources of clean drinking water and adequate infrastructure and political stability for responsible water management systems. Because water is both the solution and barrier to achieving each of the SDGs, every nation should be motivated by the universally beneficial nature of hydro-diplomacy and its potential for cultivating a more sustainable, equitable world.