Next week is set to be quite controversial with the European Conference on Tropical Medicine #ECTMIH2017 and the Emerging Voices for Global Health (EV4GH) session where alumni will hotly debate the role of health policy and systems research in transforming political commitments to improve our health systems.

There has long since been the issue of knowledge translation, impact and particularly influencing policy, but let’s face it there are few instances (e.g. researchers lobbying for the sugar tax in South Africa- SA) where this is the case, other than that all evidence tends to remain locked in ivory towers where perhaps a magic wand will one day release and influence policy. I reckon the magic lies in the art of truly engaging policy makers – not those once-off end of project meetings hosted in fancy hotels.

In the new age, there are two main mechanisms to influence politics (main stream media and social media – look at #Covefe discussions for instance). In South Africa, media play a critical role in this. You have to ask yourself the question : do I have enough connections with mainstream media? If not it’s unlikely your work will ever reach political agendas and priority setting. During my short (but dare I say celebrity struck) career, I have learnt the importance of every media connection : I started out speaking about healthcare issues on small community radio stations to being featured on national stations which for example led to engagements with youth, the broader public and even policy-makers on the national health insurance (NHI) in South Africa. 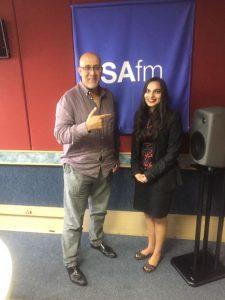 We tend to view policy-makers as being out of reach. My experience as a health policy and systems researcher (in my previous life anyways) was that we would spend close to two years planning a meeting, tread carefully on being objective, go through a million levels of bureaucracy – but rarely actually ever engage policy-makers.  Working just close to six months in the civil society sector, I have watched in awe as our country offices (Southern African AIDS Trust) take just a week or two to bring together meetings which include youth, the community, religious or traditional leaders (yes they are super important too) and high-level representatives from the Ministry of Health, Gender and even the Ministry of Police who actually became key stakeholders in our projects. In fact, on my last visit to Malawi, I simply adopted this proactive approach and asked a member of parliament if he would give me a tour of the parliamentary precinct – to which Honourable Justin Majawa gladly agreed and picked me up at 07:00am the next morning for what I would deem the best tour of my life. The Honourable explained parliamentary processes, ushered me into areas strictly reserved for MPs and showed me documents such as the minutes, agenda’s,  and reports sent to MPS, which I’m now excited to have as important artefacts. Establishing a working relationship was another (rather pleasing) outcome of this encounter. 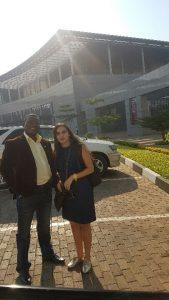 The same goes for the Director General (Dr Tedros) of the World Health Organization (WHO), my favourite person at the moment when it comes to youth engagement. I have been engaging him on social media and he is extremely responsive and open to youth initiatives and promoting youth-led work. In fact so much so that the engagements have led to fellow EV Renzo Guinto and I co-leading a joint-write-up with the DG – watch this space! Not forgetting that he also retweeted our upcoming session at #ECTMIH2017! If you’re a “senior” in HPSR at the moment, other than Professor Wim Van Damme , you can’t be cooler than Dr Tedros (perhaps a need for pointers from our DG on this). 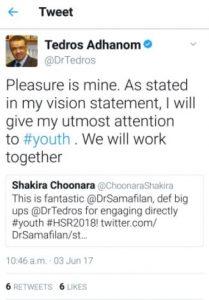 So what would be my key lessons ? Make those links with media personalities (the influence is unreal), be proactive because policy-makers are not as far removed from our world as we believe they are and finally catch all our action next week at ECTMIH, where I look forward to beating other EVs hands down during our debate (Faraz Khalid, Kerry Scott, Sameera Hussain, Seye Ambimbola, Prashanth N.S , Raoul Bermejo) for I am an ex-comrade after all!

The EU Global Health Strategy: Building Back Better?Shouldn't HSR2022 participants be more critical of visiting the Salt Cathedral in Bogota?There is more than White Supremacy in Global Health: On the Biases WithinDecolonizing health in our times: a cross-epistemic exerciseWorld Health Summit – Are We New and Improved?
add a comment
Cancel reply
0 comments