I was no less than thrilled to be attending the WHO’s first Global Conference on Air Pollution and Health (30 Oct-1 Nov) this week, one for the fact that it was organized by WHO (in collaboration with many intergovernmental organizations) at its headquarters in Geneva, and two for my interest in exploring the area of air pollution and health. Being at the headquarters and attending the plenaries in the WHO Executive Board Room with the key leaders from WHO and representatives from several other national and international organizations, governments and institutes, was an amazing experience in itself. I was not only overwhelmed to be educated about the breadth and depth of issues connecting air pollution, climate change and health, but also felt committed to do my bit at the individual and community level in reducing air pollution. In that sense, the conference already had a (micro-) ‘impact’! 🙂

The conference was held in response to a few World Health Assembly Resolutions (68.8 in 2015 and 69.18 in 2016) to address the increasing morbidity and mortality resulting from air pollution. The 3-day meeting in Geneva included workshops, plenaries and parallel sessions on a wide range of issues related to air pollution including households’ access to clean energy, ambient air quality monitoring, air pollution and children’s health, air pollution and NCDs, air pollution and climate change, reducing health sector emissions, protecting workers from air pollution outdoors and indoors, and equipping national health workforces to deal with air pollution amongst many others. The conference brought together substantial evidence on each of these issues from across the world (with some creative and feasible solutions like targeting pregnant women rather than poor households for using clean fuels for cooking), highlighting the complex interlinkages and their potential implications on human health as well as ecological (i.e. planet) well-being. In addition to the intensive sessions, the conference also showcased some very interesting and innovative ways to create awareness about air pollution as a critical health, climate and environmental issue, like Pollution Pods: a sensory art exhibit created by UK artist Michael Pinsky in which the air quality from the 5 most polluted cities of the world was simulated. On 31 October, a Breathe Life Concert also took place – the cultural event of the conference that featured “United Nations Humanitarian Artist” Ricky Kej along with several other Grammy award winners, nominees and artists from across the world advocating their (likeminded) messages through music and art.

Given the scale of impact from air pollution (ambient and indoor combined) killing around 7 million people every year and significantly affecting the health and development of 1.8 billion children, everybody in the room agreed it’s more than time to speed up the global response to prevent these deaths and sufferings. Billions of people are breathing toxic air (referred to as the ‘new tobacco’ by Dr. Tedros) every day, not only risking their own lives but also jeopardizing the health of future generations and the environment in which they will grow up. In his opening plenary speech, Dr. Tedros highlighted that ‘if the cost of action appears so high, then imagine how enormous would be the cost of our inaction’. The urgency of taking real action, using a more systemic approach  (rather than a siloed one) was being reiterated multiple times during the conference and special emphasis was laid on multi-sectoral collaboration, bringing the health sector at the forefront in addressing these emerging challenges. Although the harmful effects of air pollution are widespread and nobody from mother’s womb to the grave is spared, air pollution disproportionately impacts women and children and other vulnerable population groups in terms of income, age levels, zip codes etc. resulting more often than not in huge inequities. Therefore, we need to make these people the focal point of our actions and include their voices in the decision making.

As is customary, the conference ended with a ‘High-Level action day’ where key messages from the previous days of the conference were taken stock of, in order to identify future steps. An aspirational goal of reducing the number of deaths from air pollution by two-thirds by 2030 was announced in the closing plenary along with around 70 voluntary commitments from different countries and international organisations. Commitments ranged from making cities plastic free and converting public transport to electric buses, over manufacturing zero-emission vehicles and achieving WHO prescribed air quality standards, to bringing air pollution and clean energy access to the political agendas and capitalizing on children as young advocates for change, to committing more investment and research in data collection, surveillance and air quality monitoring and many more.

Only if we are as unified in our vision to produce results on these commitments, as we were in (vigorously) announcing them, we will be able to prevent a great proportion of deaths due to air pollution and substantially reduce the suffering. Every human being is entitled to breathe clean air and (only the clean air of) the sky should be the limit!

PS: I’m rooting for the next global WHO conference on air pollution and health to take place in Delhi : ) 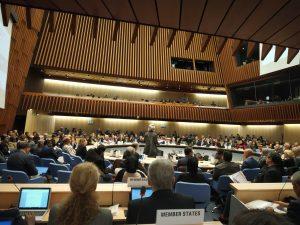 The EU Global Health Strategy: Building Back Better?Shouldn't HSR2022 participants be more critical of visiting the Salt Cathedral in Bogota?There is more than White Supremacy in Global Health: On the Biases WithinDecolonizing health in our times: a cross-epistemic exerciseWorld Health Summit – Are We New and Improved?
add a comment
Cancel reply
1 comments