The fourth Flagship Report of the Alliance for Health Policy and Systems Research “Medicines in health systems: advancing access, affordability and appropriate use” was launched in Cape Town and can be downloaded here. If this was the fourth report, it means it had three predecessors. The third one, you know it very well, I am sure it’s shining on your bookshelf already and has given way to two journal supplements. That is “Systems Thinking for health systems strengthening”.  But most probably, many of you, especially if you are an Emerging Voice, were not born to the HPSR Universe when the second Flagship Report was released. This second Flagship Report, “Sound Choices: enhancing capacity for evidence-informed policy” , was co-authored by one of the master minds of HPSR now chair of Health Systems Global, former Executive Director of the Alliance, Sara Bennett.  You can download it here .

“Sound Choices” as we call it in house, unpacks for us capacity strengthening for health policy and systems research. There are only a few people who still believe that capacity strengthening is about bringing together students or health managers in a room and teach them. This is of course useful but often, it’s not enough. If you want to find out why it may not work, read “Sound Choices”, which teaches us some extremely useful basics.

We often tend to approach capacity strengthening with the preconception that who teaches knows and who is taught must learn, with information circulating in a single direction and sometimes in a paternalistic way. But “Sound Choices” says that capacity should not be built. Using this wording suggests “a process starting with a plain surface and involving step-by-step erection of a new structure, based on pre-conceived design”. On the contrary, we have to acknowledge the existing, the diversity and richness of experiences, the context, explicit and tacit knowledge, and new ways of sharing both. And therefore “strengthen” and “develop” rather than build.

Second, ”Sound Choices”, which was released in 2007, highlights that capacity strengthening efforts focus too heavily on individuals, neglecting institutions and the wider environment in which individuals evolve. In short, in capacity strengthening for HPSR, like for the rest of the health system, we need to think in terms of systems, move away from a tree-by-tree approach and have a look at the forest.

Third, “Sound Choices” presents the critical functions that allow evidence informed policy. These are a) research priority setting, b) knowledge generation and synthesis, c) evidence filtering and amplification and d) policy making processes. Obviously, capacities to perform each of these functions reside in organizations such as research institutions, funding bodies, civil society, the media, think tanks or government bodies. HPSR Capacity strengthening efforts should therefore target these organizations and reinforce their leadership, governance, resources and communication capacities in order to enable them in performing their functions. 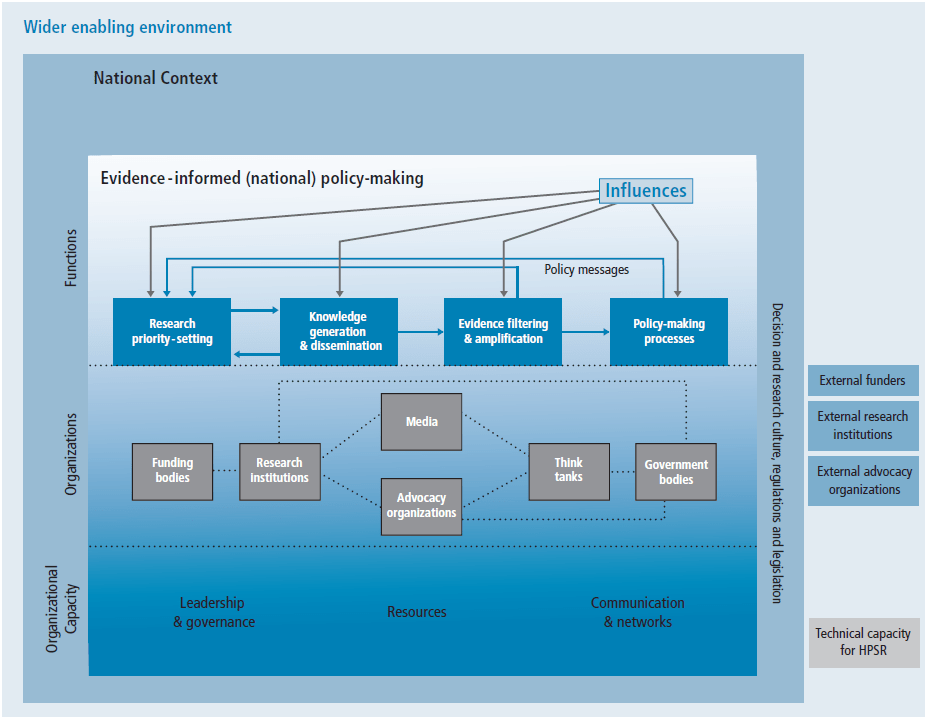 This is a vast agenda, which the Alliance put forward for the HPSR community more than seven years ago. However, we have to acknowledge that so far, we (aka the HPSR community) have kept our traditional focus on knowledge generation and dissemination, the latter through the standard means of peer reviewed publications. Examples of investments in research institutions exist of course, and more recently also networks of institutions have been funded and have developed interesting activities. Examples of sharing knowledge through other ways than teaching, e.g. communities of practice, are also showing promising results. But again, our efforts have been mainly invested in individual’s capacities for HPSR. Despite their brilliant and most powerful presence in the three successive symposia, the dynamic network that they have created and maintain and the opportunity they provide for the young generation, the Emerging Voices venture for example, is still building the capacity of individual young researchers. We, at the Alliance, have heavily invested in capacity strengthening. Most of our research grants include a capacity strengthening component; we bring researchers together in protocol development workshops, support them in their research and nurture their publications. We have several other capacity strengthening initiatives too but these are often again focused on individuals. As the rest of the HRSR community, if we want to progress towards a longer term, more sustainable forms of capacity strengthening, if we want to bring about structural changes in the capacity of health systems to produce and use HPSR, we have to do things differently.

From 13-14 November, the Alliance convened a group of 18 leaders representing academic and research institutions and funding agencies to take part in a consultation on strengthening capacities of researchers and policy/decision makers in HPSR. The purpose of the expert consultation was to have a dialogue on emerging issues in capacity strengthening and to identify how the Alliance can best contribute to the development of HPSR capacity moving forward.  The experts reiterated that capacity should be strengthened across individual, institutional and system levels; that it should take into account the political context of HPSR. Efforts can support the development of teaching and training material, but should also focus on other capacity strengthening approaches such as credible career paths, mentoring roles, collaborations between health and social sciences. Finally, it is important to measure the outcomes and impact of capacity strengthening efforts, which require a monitoring and evaluation framework that would take in consideration the specificities of health policy and systems research, as opposed to clinical research. After all, the role of HPSR is to affect change in health systems, capacity strengthening efforts and associated M&E frameworks should take that goal in account. While the recommendations of the experts will guide the formulation of the Alliance’s strategic plan 2016-2020, the HPSR community should also consider the recommendations of essential guiding documents such as “Sound Choices”, and reflect on how they may want to orient capacity strengthening for HPSR in the future.