Last week, my Facebook newsfeed was flooded with posts from friends and colleagues about the practice of public health in the Philippines and abroad. On one hand, my fellow Filipino friend Harvy Joy Liwanag, who is doing his PhD at the Swiss Tropical and Public Health Institute, noted in his FB wall the lack of ‘an influential group to represent one single voice’ for Philippine public health, citing the Royal Society for Public Health in the UK as an example.

From the other side of the world, Lawrence Loh from Toronto, who is a fellow alumnus at the International Federation of Medical Students’ Associations (IFMSA), lamented the misuse of the term ‘public health’ by physicians. He noticed that it is becoming ‘more and more common to find someone who is “practicing” public health,’ and therefore proposed to clarify the distinction between ‘practicing public health and incorporating a public health issue into one’s practice’ to avoid ‘further confusion around the role of public health physicians.’

These conversations in social media, at least among my doctor friends, are a positive sign of rapidly growing interest in public health among today’s generation of physicians – perhaps this era can be called public health’s ‘renaissance,’ perhaps more precisely in the developing world. For instance, since I have ‘retired’ from IFMSA after medical school, at least 20 fellow junior doctors from developing countries have sought for my advice on how to shape their public health careers – perhaps they were deceived by my FB posts depicting my public health adventures. What many don’t know is that I had to understand the tricks of the trade myself, learning public health as I do it. It is only now that I am about to pursue a formal advanced training in public health beginning this July.

I would surmise that this resurgence of the field especially in the developing world is brought about by many developments around us – the changing global social and political context (like the recent election of a new president in my country); the general dissatisfaction towards our chronic public health challenges especially persistent health inequities; the increasing anticipation of emerging health threats such as pandemics and climate change; the emergence of ‘hegemonic’ ideas in health such as ‘universal health coverage,’ ‘sustainable development,’ ‘resilience’ and the like; the rapid spread of technology that allows global learning and dissemination of knowledge; the increasing attractiveness and accessibility of public health courses, trainings, and conferences; the recognition that developing countries need to build their domestic capacity for public health and not rely anymore solely on external help, to name a few.

With this acknowledgment of public health’s growing importance also comes the deep understanding that before the abovementioned daunting challenges can be addressed head on, there is a need to put the house in order first. As an enthusiast of history of medicine and public health, I will be citing several enduring messages that still haunt us from the past that can aid us in reimagining public health in our time, in our own settings. For instance, in the United States, the Institute of Medicine already noted nearly three decades ago that their public health system was in ‘disarray,’ which led to the defining of 10 essential public health services, delineating the roles of public health agencies and professionals alike and later adopted by other countries. [Of course, and it is important to make this distinction, that despite this, it took them two more decades to fix their system of financing of personal care services (as compared to public health services) through Obamacare, which remains a work-in-progress until today.]

Nonetheless, since the recent online debates have focused on who should be considered as practitioners of public health, I will cite one definition that I believe still stands until today, even in our era when attempts to  separate global health from public health lead to, in my opinion, wasteful and lengthy academic discussions and even create more confusion. (For me, and I agree with America’s public health deans: global health is public health.) Going back to the definition, here it reads: ‘Public health is the science and art of preventing disease, prolonging life and promoting health through organized efforts and informed choices of society, organizations, public and private, communities and individuals’ – according to Charles-Edward Amory Winslow, the founder of the Yale School of Public Health, in his 1920 article in Science.

Recalling Lawrence’s concern about the protagonists in the public health field, and given this broad definition of public health as a ‘science’ and ‘art’ geared towards improving society overall, it is therefore vital to acknowledge that public health is and must be comprised of a diverse variety of people, and therefore these categories need to be identified for the purpose of education and capacity development, but also regulation and accountability. Before, the types of public health workers envisioned for the 20th century were, I would say, much simpler than our workforce needs for today. “The public health servant may be teacher, research scholar, technical expert or administrator… Public health work is therefore becoming, in fact, has already become, a separate profession. It has split off from medicine just as medicine long ago split off from the priesthood,” remarked in a 1915 JAMA article by Milton Rosenau, who at the time was the first director of the Harvard–Massachusetts Institute of Technology School for Health Officers – precursor to Harvard’s public health school.

Today, public health professionals are not anymore just the ‘teacher, research scholar, technical expert or administrator’ that Rosenau envisaged a century ago. At least in the United States, the core competencies for public health professionals have already been clearly defined, yet are constantly reviewed and updated to ensure that public health education and practice are apt for the rapidly changing times. Furthermore, unlike before when Rosenau and his colleagues envisioned public health professionals graduating solely from a public health school, people in public health today hail from a wide array of disciplines such as economics, social sciences, engineering, environmental science, and international affairs, to name a few. Such diversity is essential because of the increasingly complex nature of public health challenges, as beautifully expressed by Julio Frenk, former dean of the Harvard T.H. Chan School of Public Health and former Minister of Mexico: public health is “a crossroads where multiple dimensions intersect: biology and society, individual and population, evidence and ethics, analysis and action.”

So how do we go forward? Going back to the situation in my home country, these are some of the present realities. First of all, public health is not a professional category of its own. What we have is a wide array of characters playing important roles in the arena of ‘public health.’ We have community medicine doctors (as well as nurses) who do not only render clinical services, but also perform public health tasks such as health facility management, disease surveillance, and health education, to name a few. We have doctors and nurses in the government-run hospital system which spans several levels – municipal, district, provincial, regional, national – who provide hospital care and perform administrative tasks – and by the virtue of them working in the public sector (as opposed to private sector), they are also considered by some as ‘public health’ workers. And we have non-health professionals – those who may have degrees in economics, social sciences, social work, public administration, etc. – who work in policy and research-oriented activities in government, civil society, and the private sector. All the aforementioned groups may not be necessarily trained (at least formally, for example through an MPH program) in public health, but we in the Philippines consider them as part of the ‘public health’ community – which I think is an imagined one, as there is no national body that provides roof for all of them, as Harvy noted in his FB post. 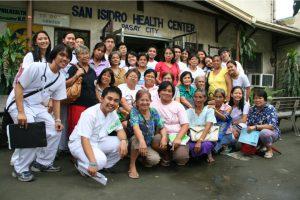 I think that public health schools have a critical role to play in ushering the needed transformation, and the recent FB conversations prompted me to dig from my treasure chest (aka external drive) a reflective essay I wrote in 2010 which I gave as a gift to Dr. Nina Gloriani, former dean of the University of the Philippines Manila College of Public Health. The College was one of the first public health schools in Asia established by the Rockefeller Foundation, which considers itself the inventor of modern public health, having funded the first schools of public health in Hopkins and Harvard, among others. I was a 4th year medical student then, but having interacted with public health colleagues early on, I already knew that my mission is not in clinical medicine but in public health. And so, with my numerous engagements with the College across the medical school, I began to formulate at a young age my personal vision for the practice of public health with the leadership role of the College in mind. Some of my ideas articulated in the essay have already evolved since, yet I never imagined that this essay of a 22-year old medical student would still hold true and be relevant today.

The FB threads as well as my dusty old essay have articulated some common proposals, such as the creation of a national association of public health and formulation of a document that lays down what constitutes the practice of public health (similar to the Philippines’ Medical Act governing the practice of physicians). Such institutions and frameworks can aid public health workforce planning, including the establishment of new agencies that address persistent public health gaps, possible creation of new job items for public health in government, and unloading of public health-related tasks traditionally assumed by clinicians (doctors and nurses alike) who already have enormous responsibilities in healthcare delivery. Ultimately, perhaps an endeavor that can be considered is a comprehensive report to be written by a national commission of experts and leaders, which will examine the future public health needs of the country, determine the kind of public health system we need, and identify the competencies that public health professionals should acquire, similar to the landmark Welch-Rose Report of 1916 that served as the basis of American, and later international public health.

For us in the communities of global health and health policy and systems research (HPSR), our active participation in this global discourse about the future of public health is very critical. Such definitions and debates have huge implications in the way we conduct our research, design health infrastructure, influence health policies, and ultimately strengthen health systems around the world. We should not let pass this rare opportunity to help reimagine public health in the 21st century.