During the Emerging Voices for Global Health (EV4GH) 2016 training and the Fourth Global Symposium on Health Systems Research (HSR 2016) in Vancouver, scholars discussed the inequities in health systems across the globe and deliberated the power and politics involved in structuring (or hampering) a just system. Empirically, several sessions explored the systemic inequities at the national and sub-national level, and called for policy attention. Themes were diverse and descriptions rich, yet for some reason the locations of the studies seized my attention. A quick review of the program booklet revealed that the presenters’ locations and the countries of research were different in many instances. Also, there was high representation from certain research institutes and countries among presenters. This prompted me to extend the debate on inequities in health systems to ‘inequities in doing health system research’.

Using the data from HSR 2016, this blog will zoom in on the regional imbalances in knowledge production. From the abstracts selected for oral presentation at the symposium (total 259), I compared the region of the research institutions and the region of the data collection. I framed a few questions to understand the asymmetries in knowledge production as evidenced by the symposium. The main observations are given below.

What does a comparison between the regions of data collection and institutions of the first author tell us?

There is an uneven representation of regions of research and institutions performing the research. Discounting the theoretical presentations from the total number of abstracts, the analysis shows that the majority (87%) of the studies used data from Asia, Africa or Latin America. However, 45% of the institutions of first authors were located in Europe, the United States, Canada or Australia (see figure 1). Zooming in on individual countries, the highest share of first author institutions was found in the United States (17%), followed by the United Kingdom (12%), Canada (9%), and India (9%). 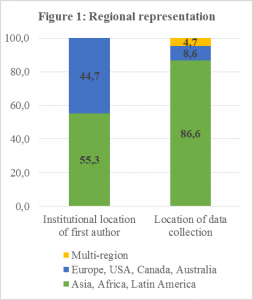 How did the research materialize? Who led the knowledge production?

The research was a collaborative exercise for 51% of the presentations with varying levels of inter and intra- country institutional engagement (see figure 2). If co-authors came from multiple institutions, this was considered as institutional collaboration. This mainly involved research and capacity building partnerships. The ‘Nil’ category (49%) consists of studies where all the authors represent only one institution (i.e. no collaboration), with 20% of these in the global North. 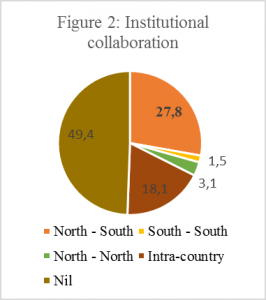 One can explore (and also question) how ‘equal’ these collaborations were in terms of ownership of research. Analysis of the authorship of research in the North-South collaborations revealed that a large share of first authors (47% of the total amount of North – South studies) were based in institutions located in the North, pointing to the still existing hierarchy in global knowledge production (see also Hasnida et al in The Lancet Global Health  (2016)). One might wonder whether the funding modalities that compelled the North to form some of these collaborations also inspired really shared ownership.

There was at least one institution from the global North involved in more than half of the total number of studies on Asia, Africa and Latin America. Also, in one fifth of the number of studies on the South, no collaborating institution from the regions of study was acknowledged by the research institutions (in the North). This is appalling, especially now that we are at a juncture discussing the co-production of knowledge.

Note that neither the questions nor the answers that emerged in the above exercise were new. They simply restate the continuing dominance of the global North in steering much of the research and highlight the ongoing power imbalances in the production of knowledge. Considering the current budget cuts by several governments in the South, we cannot anticipate any reduction in dependence on external funding for research in the medium term. Still, when health systems research is increasingly (and rightly) a multi-country collaborative endeavour, we need due space for discussing the ethics of collaboration and negotiating the power relations. Clearly, not all collaborations are equal. At the very least, when donors put in place North-South collaboration requirements, it is vital they make sure there is true collaboration.