HSG 2016 is off to a terrific start here in Vancouver.  On just the first day of the two-day satellite session period, the energy was palpable, with engaging sessions on topics ranging from the practicalities of achieving universal health coverage beyond borders, to the politics and governance of evidence. For a moment, you could almost forget the dismal news out of the US from last week, and recede into a happier place of equity, social justice and meaning.

But, reminders of our new world order are never far. While skimming the news during a session break, I came across this piece on Trump’s potential cabinet picks in the New York Times. 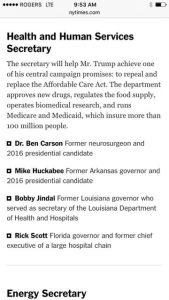 It says something about the state of the world, when on the one hand, you have incredibly well-intentioned, capable and smart citizens of high-income countries discussing the important role of donor agencies in promoting national-level accountability, while on the other hand, the leading choices for the Secretary of Health and Human Services in the United States have variously denied climate change and evolution, supported concealed carry of fire arms, believe that homosexuality is abhorrent, restricted abortion services, and limited the expansion of pro-poor Medicaid. As an American citizen, there is a certain hollowness that one feels knowing that despite all our efforts to instill empowering values in our work, we are often woefully inadequate in finding it in our own political systems.

Many of us in global health carry multiple identities (citizenship, ethnicities, you name it). My own identity is complicated – an American citizen, raised in India, studying at Johns Hopkins, and researching health policy and systems in the Indian context. One of America’s strengths has been its ability to absorb people like me into its urban centers with relative ease, providing a safe and vibrant multi-cultural base for – in my case – work on health issues in low- and middle-income countries. The need to look ‘inward’ never felt quite as urgent as the problems in more disadvantaged places, nor was our orientation towards global health at the expense of domestic issues deeply challenged.

However, in the age of Trump, Brexit and other nationalist movements, that feeling of ease is out the window, as beautifully put by Jonathan Glennie in his op-ed today. The utter shock that many of us felt following the election is a signal that we do not know our immediate environs. Or at least we don’t know it well enough. The sexism, racism and discrimination is real, but so is the fact that as elites, we perpetuate islands of freedom, security and liberal thinking within a sea of more complicated and often conservative thought. I’ve always taken the notion that international work has its own unique promises and challenges, and should be given a space of its own to function. But given the direction of our national politics, it seems a bit artificial to fully detach from our association with a Trump-led America that denounces science, promotes guns, and disrespects women, and to continue with business as usual. The same goes, by and large, for my colleagues in Europe, even if Trump probably “trumps” the current crop of European xenophobic and populist leaders. More accurately, perhaps, it is not possible anymore to continue with business as usual, even if we wanted to.

But, what comes next? Do we start to integrate more domestic activism in our public health training? Do we actively encourage domestic research alongside international projects? Do we abandon our existing careers and move to so-called red states to win ‘hearts and minds’? Would any of this really make a difference? The vagueness and confusion of the aftermath is frightening.

So while I am here at HSG 2016, I seek a little bit of clarity. I understand the argument that a post-Trump world may not be the apocalypse, but based on his leadership appointments, it’s not going to be Bush 2.0 either. So we would be well-served to think about this differently. The world is filled with kind, thoughtful and brave people, and my cohort of EV 2016s are living proof of that. From them, and from others at the conference, I hope to learn how we as Americans can become more active and alert in our politics, become willing to work within our context, and to continue to work passionately and collaboratively on health, empowerment and social justice in other parts of the world.