Planetary health or WEIRD attempts to re-invent the wheel?

On a cold Monday (November 13th), I had the opportunity to attend the 2017 Academy of Medical Sciences and The Lancet International Health Lecture, by Dr. Samuel Myers, who is Director of the Planetary Health Alliance and affiliated to the Harvard School of Public Health. The lecture took place in London, one of my favourite cities. In the very (read: too) warm Henry Wellcome Lecture Theatre – the venue almost reminded me of home and raised some concerns over the Wellcome Trust’s own contribution to CO2 emissions -, an overly enthusiastic Richard Horton introduced this year’s annual lecture under the title, Planetary Health: Protecting Global Health on a Rapidly Changing Planet.

In his lecture, Dr. Myers gave a succinct and very relevant summary of the steep biophysical changes that have taken place on our planet and their impact on nutrition, infectious disease, displacement and conflict, non-communicable disease and mental health. He emphasized the intergenerational debt and highlighted the issue of equity in the nascent science of Planetary Health. In the end, as he put it, “it is the poorest people with the least diverse diets who will be pushed into worsening nutrient deficiencies by CO2 concentrations that are increasing in response to wealthy world carbon emissions. Future generations will suffer the consequences of today’s unsustainable consumption patterns.”  Damned right.

He also mentioned in his lecture that the Planetary Health Science is only now teaching us “that each person on the planet, those alive today and those coming in future generations, is connected to everyone else”. Nevertheless, this realization of interconnectedness is not exactly new. Now it’s (finally) also becoming mainstream in the hands of the W2EIRD (White, Western, Educated, Industrialized, Rich & Democratic) people. Even actor Jim Carrey now makes a living out of preaching this ‘discovery’ through his ‘path of enlightenment’ (Ayahuasca ritual included, I would assume).

From the First Nations People in North America, over Indian tribal communities and the Australian aboriginal population, to quite a few Buddhists, many communities have this view of interconnectedness of all beings, past, present and future, and the land they are part of (not the land that belongs to them). It is not by chance that Aboriginal people have some of the highest rates of substance abuse in Canada: there is reporting and evidence that this issue is rooted in historical and inter-generational effects of colonization. Complex multiple losses that include the loss of traditional lands and culture and forced removal from families constitute some of the elements that lead to increased substance use as coping mechanism, sadly.

As for the ways forward to provide solutions to the set of wicked problems defined by Planetary Health Science, Dr. Myers made a plea for paradigm changes at different levels, involving actors outside and within Public Health disciplines. Again, alternative paradigms or frameworks have already emerged, such as Buen Vivir (Living Well or Collective Well-Being) in Latin America or Degrowth (versus ‘Sustainable Development’), just to name a few. Maybe it is now time to take a look at what we already have outside of the knowledge system of the W2EIRD people. To his credit, Dr. Myers seemed to agree that “it might be that indigenous and aboriginal cultures and many faith traditions have an important role in reconnecting us with that other important way of knowing that is more consistent with stewardship of our natural systems.”

In the meantime, the world keeps spinning, with COP23 ending in Bonn, New Delhi residents, including a good friend of mine, being affected by toxic smog and the Mapuche communities still bravely resisting land grabbing by Benetton in Patagonia, Argentina.

Planetary health proponents have their work cut out. 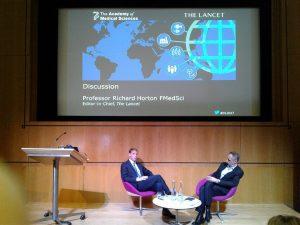