Nicaragua: the House of Cards you probably didn’t notice

On April 20th afternoon, I decided to join one of the peaceful protests in my country. We marched approximately 2 km towards the cathedral in Managua, waving Nicaraguan flags, banging pans and pots or whatever could make noise, and yelling out loud “We’re not afraid anymore!”. We were protesting against the social security reforms announced earlier that week. As we came closer to our destination we saw anti-riot squads on the sideways. They stood still until we were attacked by an angry mob of people wearing pro-government shirts. That’s when the teargas was thrown and rubber bullets were shot at us, with only flags in our hands. Earlier that day a 15-year old boy carrying water bottles for the students entrenched inside the Polytechnic University was shot in the neck—it was not a rubber bullet. People gathering food and medical supplies for university students in the cathedral had to keep inside, under siege – an attempt of the police and pro-government paramilitary forces (the Sandinista youth) to stop people from helping protesting students.

The social security reforms were just the trigger of Nicaragua’s sudden uprising that took us all by surprise. Since Daniel Ortega took office again in 2007, he and his wife (and now vice-president) Rosario Murillo have been pretty proficient in making alliances with former enemies and the private sector. This allowed their Sandinista party to make significant institutional changes and to take control of virtually every branch of government, the Supreme Court and the National Assembly. They established a State-Party-Family regime that also controls the streets, not allowing dissidence nor opposition. At the same time, Ortega-Murillo’s sons and daughters hold important positions as presidential advisers and they own TV channels among other private enterprises. First lady and vice-president Murillo has lavishly spent US$ 3.3 million to build and install 134 ‘Trees of Life’ and an additional $1.1 million annually in electricity bills, all this in the second poorest country of the Americas. These ‘Trees of life’ are 9-ton, 17-mts tall metallic constructs that ‘decorate’ the capital city, but above all reflect the esoteric vision of Nicaragua’s most powerful woman. Now, they are felled by the protesters, who keep on demanding the ouster of the presidential couple. 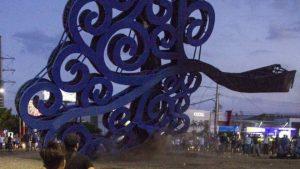 You might have seen some images of the protests on tv, thinking you were watching (yet again) riots in Caracas, Venezuela. Wrongly so. Far less forgivable was the regime’s immediate and irrational response, dismissing the protesters as “minuscule groups”, “vampires”, “full of hatred”, allegedly supported by “ultra-right” opposition, funded by the US government to destabilize the country, manipulated by the MRS party – a small party of Sandinista dissidents. All wrong. Then, what actually happened?

First of all, some students had already taken the streets early April, to protest against the slackness of the government when a week-long fire destroyed more than 5,000 hectares of Central America’s biggest rainforest reserve, the Indio Maíz, located in the Nicaraguan south-east corner. Ever since, the protesting students refer to themselves as ‘autoconvocados’  ( self-convoked ). They embrace non-violence and want no existing political party to represent them, neither right nor left wing. They do not trust the government nor the political figures that had their share of power in previous neoliberal governments and under the Ortega-Murillo regime. Protests intensified and the group of students became bigger after social security reforms were announced which raised contributions but left institutional corruption untouched. When protesting students were taken to prison, beaten up, and shot dead by the police and paramilitary forces, the population started supporting the students. Journalists covering the protests were targeted by the party mobs and the police; one of them was shot dead while broadcasting.

Protests have taken place in all parts of the country, also in the historical Sandinista strongholds. The ‘minuscule groups’ turned into a march of hundreds of thousands of people in the streets of Managua on April 23rd, right after the Ortega-Murillo regime decided to take a step back and withdraw the social security reform. One day later, Ortega accepted to start a dialogue, in which the Catholic bishops will act as guarantors. But who will be allowed at the table, when the dialogue will start and what will be discussed, all these vital issues are still in limbo. The ‘autoconvocados’, as well as other sectors of the population are demanding the establishment of a new governing body, not allowing the Ortega-Murillo couple to finish its current term. They also want justice for the victims of human rights violations, including 46 (confirmed) dead, more than two dozen missing and still uncounted incarcerated protesters, of which many were tortured.

As one of the protest’s banners signaled “We are not from the left, nor from the right, we are the ones at the bottom and we come for those who are above us”. Is this a real “Nicaraguan Spring”? Will this be the end of our caudillismo curse? Wherever our movement will lead to, eventually, I don’t know. One thing I know for sure is that it will be a bumpy journey, as Ortega clings to power ferociously. 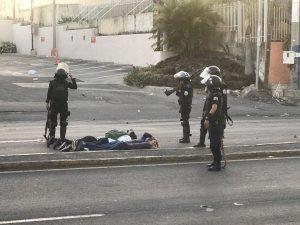