New Beginnings at the WHO: DG Tedros’ first Executive Board meeting

On 22nd and 23rd November 2017 at a special session of the Executive Board (EB) held in Geneva, WHO’s new Director-General (Dr. Tedros) presented and received comments from the Executive Board and other Member States on the organization’s draft strategy document – the 13th General Programme of Work (GPW). The GPW is meant to be a roadmap for WHO in the next five years (2019-2023) and provides an important indicator of Tedros’ priorities and leadership vision for the organization. Tedros’ persona as a “people’s DG” and his open style (including his rather active twitter handle), have drawn quite some attention, as did his recent gaffe of appointing Robert Mugabe as WHO’s NCD Goodwill Ambassador (which he quickly rescinded, fortunately). Prior to the meeting, some commentaries on the draft (see for instance here, here and here) and a heated twitter exchange (between Richard Horton and Anthony Costello) had already suggested that the moves of the new DG are being carefully scrutinized by global health players.

The GPW is clearly ambitious, and it appears that Tedros is urgently looking to restore faith in the WHO. In his opening remarks, he reminded Member States that WHO cannot continue with “business as usual” – there is a need for a paradigm shift if the organization is to remain relevant in the new global health landscape. In the GPW this is reflected in both strategic shifts (stepping up global leadership, driving impact in every country and focusing global public goods on impact) and organizational shifts (measuring impact, transforming partnerships communications and financing, reshaping the operating model to drive country, regional and global impacts, building critical processes and tools and fostering a culture change in the WHO). While the document was received positively by most member states, who appreciated the transparent, consultative and swift process that was undertaken in its development, there were also concerns raised by some regarding deviation from WHO’s core functions of setting normative standards and providing strategic and technical support, into a more operational role. However, Tedros reassured States that the WHO would be operational only in a handful of 15 countries with fragile settings, and that the core functions of WHO would not be jeopardized. In other countries, WHO will continue to engage via policy dialogue, strategic support and technical assistance, depending on the scale of maturity of the health system.

A critical concern over costs and financing was flagged repeatedly by member states as well as non state actors, however no clear indication was provided on how to address potential funding gaps for a budget covering an ambitious GPW, and it appears that one will have to wait for the investment case which will be presented early next year, ahead of the Executive Board meeting end of January. However, it is pertinent to note that even as Tedros called for more unearmarked funding from Member states, he assured them that signing off on the GPW did not (necessarily) imply they would have to fund it all themselves. This seems to suggest that voluntary donors & private partners will even more become part of the financing strategy (Tedros was also hinting at an ‘innovative’ funding approach). Along with this, the commitment to “partnerships and multi-stakeholder participation” raises concerns around WHO’s independence and integrity, which calls for (more) scrutiny of the implementation of the Framework of Engagement with Non State Actors (an issue raised by both CSOs and some Member States); however no substantive discussion on this issue took place. As IBFAN pointed out in its statement to the EB, it appears that FENSA is perceived to “enable partnerships rather than manage them in order to safeguard the WHO.”

It is noteworthy that, in response to questions raised over WHO’s accountability and impact, the GPW looks to demonstrate impact and hence prove itself to be a “good investment”. A detailed  impact framework and “Triple billion” targets have been set up, and were elaborated upon by the secretariat team. However concerns were raised about their alignment with the SDG targets, as well as on the challenges of data availability. Moreover, there is a danger that setting such targets could foster a tendency to pick the lowest hanging fruit; as some countries pointed out,  regional and country disaggregation is required so that the focus will not only be on big countries, as there’s a danger that the “billion targets” would focus attention first on the latter, with bigger populations. Further, one wonders whether the setting of such “marketable” targets erroneously puts WHO at par with other global health partnerships, turning the organization into just another player in the global health ecosystem, rather than a leader. This trend, known as “Trojan Multilateralism”, implies that WHO might be redirected by specific incentives and bilateral control (by its funders) hence deepening the democratic deficit of global health governance.

While Tedros’ responses to Member States concerns seemed to be in line with his claim that he and his team are listening, to what extent he provides (and will provide) space for CSOs to engage in the policy debate and formulation remains to be seen. Although CSOs concerns regarding the exclusion of certain issues from the draft (ageing, disability, violence against children, sexual and reproductive health, alcohol abuse, palliative care, solid waste management) were acknowledged and assurances made to include them, more contentious debates around conflicts of interest, democratic governance and financing by private players did not take place. One wonders therefore if the participation of CSOs will remain tokenistic or become more substantive in the future.

Finally, Tedros’ leadership style at the meeting was collective and open. He was candid about the challenges of WHO’s own work culture, stating that even as he was proud of having the most gender-equitable senior management in the organization so far, he also feared pushback because “mindsets are perhaps not ready for it”. He repeatedly invoked the participation of his senior leadership and regional directors, and called for greater ownership from Member States. While appreciating feedback from States on the draft, he appealed to them at the same time, to provide unearmarked funding which would allow for greater independence and true prioritization. Ultimately, the extent to which Tedros’ GPW will translate into real action will depend to a large extent on how it will be financed. Overall, discussions on the draft GPW appear to be positive and criticisms by member states and non-state actors appear to have been taken note of by the secretariat, if not explicitly discussed. A revised (final) draft and the investment case is expected early next year, which will be discussed once again in the EB meeting in January 2018, and then agreed upon at the World Health Assembly next year. 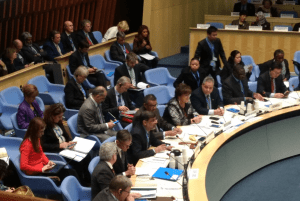 Special Session of the WHO Executive Board on the draft thirteenth general programme of work, 22nd– 23rd November 2017.