Subscribe
Home > blogs > Mental Health in the Workplace: For too many people a contradictio in terminis in our (late-)capitalist world?
blog

Mental Health in the Workplace: For too many people a contradictio in terminis in our (late-)capitalist world?

Every year, the World Mental Health Day is celebrated on October 10th. This year’s theme is Mental Health in the Workplace. The WHO acknowledges that an adverse working environment can lead to negative mental and physical outcomes, while also highlighting depression and anxiety as conditions that hamper productivity (with a substantial impact on the global economy in turn).

Of course, we welcome the fact that this year’s theme is related to a “social determinant of health” rather than a particular mental illness. This opens the door to prevention of work-related mental health issues from a non-health perspective, and to a broader public policy perspective. Such a shift from an individual’s illness focus to a psychosocial approach is long overdue.

WHO’s proposal to boost mental health in the workplace suggests a three-pronged approach consisting of: (1) reducing work-related risk factors for health; (2) creating a healthy workplace; and (3) supporting people with mental disorders at work. The second one overlaps with the agenda from the World Economic Forum. Nevertheless, even WHO’s broader three-pronged approach falls short of what is needed to improve mental health in the workplace, basically, because it remains firmly grounded in the capitalist model, which by definition is incompatible with “healthy lives, a healthy planet and social equity”.

There is no magic bullet or “one-size-fits-all” response to the issue of the workplace as a potential generator of suffering and illness. In addition, we need to acknowledge that work “as we know it” is constantly changing. We can look at the mental health impact of the workplace from various angles, whether it’s the rise of the ‘gig’ economy in the North; the high unemployment rates around the world that are expected to rise even further this year (as compared to 2016); the more than 40 million people across the world that are victims of modern slavery (with almost 25 million of these in forced labour), according to a recent report by the International Labour Organization (ILO) and the International Organization for Migration (IOM); or job dismissal, overwork & burn-out, common phenomena now in many “developed” and other countries. Just recently, we heard of one of the many cases of ‘death from overwork’ or karoshi, in Japan, and students forced to work long hours in China.

A while ago, we had the chance to interview Cecilia Ros and Miriam Wlosko, two researchers who have been working on the Lanus National University’s Health, Subjectivity and Work programme for over 20 years in Argentina. An interesting finding from their research concerns the impact of neoliberal policy reforms – aka “adjustments” – on people who are fired, the unemployed and their families and communities. In many cases, they found job dismissals not only to have an impact on those directly affected but also on the people who continue to work in the same place. The so-called ‘survivors’ (or those that are “left behind”, if you want it in inclusive SDG jargon) more often than not have to endure conditions that are not acceptable, or downright precarious. According to Ros and Wlosko, dismissals and precarious working conditions have the purpose of disciplining workers; the threat of being fired has become a managerial strategy in quite a few workplaces around the globe, not just in Argentina – any resemblance with the situation of academics toiling in neoliberal environments is of course purely coincidental 🙂 .

SDG 8 aims to “promote sustained, inclusive and sustainable economic growth, full and productive employment and decent work for all”. The International Labour Organization has defined decent work as work that “is productive and delivers a fair income, security in the workplace and social protection for families, better prospects for personal development and social integration, freedom for people to express their concerns, organize and participate in the decisions that affect their lives and equality of opportunity and treatment for all women and men”. Seems like a nice definition, if you ask us; still, many questions can be asked, such as: What is “a fair income”? How much participation should be promoted? How  “decent enough” is work before it can be considered as ’decent work’? And, perhaps even more importantly, is a ‘decent work’ agenda really compatible with a predatory globalized capitalist economy?

Whatever actions are taken to promote and create awareness of mental health in the workplace, we should perhaps get rid of the (somewhat naïve) belief that having a job will always be a guarantee of stability. We need to focus on improved well-being in the workplace, and not just zoom in on specific pathologies such as depression and anxiety. Last but not least, if we are to talk about mental health in the workplace, one needs to have a “workplace” first. As you know, not everybody is that lucky. And that’s even before the robots and other AI tools are going to take over. 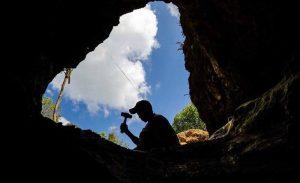