The ninth edition of the World Health Summit (WHS) was held during October 15th -17th, in a nice former cinema hall in the city of East Berlin, built in the early 1960s and with a rather appropriate name for the occasion, “Kosmos”.  This year, the event was attended by 2,000 participants from 100 countries, all aiming “to improve healthcare all over the world”. Well, at least, that’s the idea.

Although I was a bit afraid this would be a “mini Davos-like” event, as described (arguably, by a biased observer)  in past editions, it was surprising and even encouraging to see a good demographic balance, with very young students and professionals, as well as senior high-profile researchers, decision-makers and CEOs from pharmaceutical companies, among other usual suspects. Even a royal member of the Kingdom of Jordan, Princess Dina Mired, actively participated as the President-Elect of the Union for International Cancer Control. Young Leaders in Global Health had their say in the opening ceremony, via an eloquent representative.

The WHS 2017 was aligned to the G20 summit held in the same city earlier this year, which had launched a call for action and for determined political leadership to thwart forces that counteract global health progress. At the G20 summit 2017, health was for the first time recognized as a focal area in order to attain the overall SDG agenda. It was also the first G20 summit in which a WHO Director-General participated, as you know. After the high-level meeting, Dr. Tedros remarked that political commitment is the key to UHC and progress towards the SDGs. During the WHS opening ceremony, Dr. Tedros addressed the participants in a video message, emphasizing again how indispensable political commitment is if global health is to make real progress.

The M8 Alliance and German authorities also called upon the countries that will hold the next G7 and G20 presidencies to make the political choices required to ensure the implementation of the 2030 SDG agenda. As for the G20, German’s presidency ends next month. Argentina will then become the first Latin American country to host the G20 summit. However, the bar has been set (too) high for the South American country, it seems – recently, the (right-wing) Argentina government implemented austerity measures which cut, among others, the science ministry budget by a whopping 36%. The current government clearly treats science and research innovation with disdain, in the name of attracting (more) foreign investment (or at least that is what they hope for, the logic isn’t entirely clear to us).

Nevertheless, on the other side of the world, academics and other stakeholders made a strong plea for “investments in science and innovation as well as in public health institutions and capacity”, (rightly) stating that this is critical to progress in Global Health. Emphasis was put on the development of vaccines, new antibiotics to address the challenge of antimicrobial resistance and efforts to prioritize the digital potential of health systems.

In many sessions, it was agreed that an inter-sectorial approach is much needed to tackle many of the challenges in achieving the SDGs. The new mindset and humble attitude of public and private actors to come together for the common good were part of the diplomatic discussions.

´Innovation´ and ´social participation´ were some of the buzzwords in Berlin. The latter was briefly addressed, starting from a rather abstract definition given by the WHO, during the workshop ‘Equitable Access to Universal Health Coverage & Care´. How and when will social participation be ensured? It is still not very clear to which extent private-for-profit and public entities are willing to let people participate in the decision-making processes and implementation of strategies to ensure equity and access to affordable and quality care. Even less clear is how social &/or community participation will be measured and assessed.

I was very glad that Elhadj As Sy, Secretary General of the International Federation of the Red Cross (IFRC) claimed that if we are really serious about ´leaving no one behind´, there is a need to involve the communities. Investing in communities, building local leadership and strengthening communities is the way forward. When it comes to preparedness and response to global threats, he highlighted that partnerships cannot be built in the middle of a crisis. Joanne Liu, International President of Médecins Sans Frontieres addressed the issue during her keynote speech at the opening ceremony, urging the world to overcome its current ‘selective humanitarianism’ and to stop “reacting to an epidemic (only) when it comes knocking on your door” (rich countries’ doors, that is).

Shouldn’t epidemic preparedness, tackling NTDs and NCDs and ensuring UHC involve the communities? Can innovations not also rise from local needs and responses, within the communities? I bet few people will disagree with this. Community participation should be as important as political commitment from heads of states. If that’s the case – and we believe it is-, then it seems also necessary to engage them in global health fora too. Perhaps an idea for the 10th anniversary of the WHS in 2018? 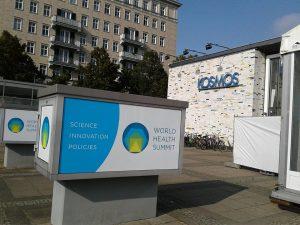