In search of a global health community of “kick-ass” women

It appears these are the times of “angry young women” who are tired of being ridiculed, ignored, or worse, harassed or bullied… the conference on global health women leadership certainly came timely. 390 women and 20 (!) men gathered in Stanford on the 12th of October. And indeed, in the morning, there was a hoo-hoo-hoo-hooray atmosphere (just sort of Mexican waves) in the room, celebrating women’s roles in history, with some poignant and emotional testimonies about refugee women fleeing with their children (from Belgium 1940 to Sarajevo 1994 to Darfur 2004), or the South African activist Mamphela Ramphele, speaking about the impact of apartheid on black men, the effect on women’s oppression and the importance of values-based civic education (iE. learning about citizenship). Other kick-ass women of note were present such as Donna Shalala who served as secretary of state of health under Clinton, the former MOH of Rwanda Agnes Binagwaho, a former Minister of Health of Peru, the director of the South African MRC, to name but a few. 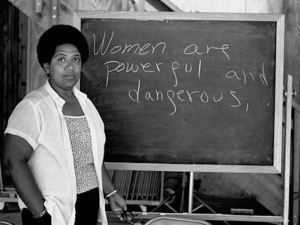 Despite the “black swans” (outliers) mentioned above, women, although they make up the majority of the global health workforce, and are in the majority in academia, still do not take up senior leadership positions. (Exceptions are the EVs and Health Systems Global)…What are we doing wrong (and are we doing something wrong, isn’t it typical for a women to think we are doing something wrong?) Women do not make it to top leadership, it was argued, as they focus too much on meticulously executing their work, instead of seeking support for big ideas… Or, women are too modest and rarely state when they have made an unique contribution to their fields. Or, women are not tough enough : we need to realize that “not everyone is going to be in our fan club”.

Others yet again argued that we need to engage men more. And yet others were saying that there can be a bit more solidarity amongst women themselves, coaching and mentoring others (I think the latter is a very powerful strategy). Finally, maybe we should re-think what global health leadership looks like. Is global health leadership really about giving keynote speeches at conferences, writing op-eds in the Lancet and networking during evening receptions (when women would need to go home to put children to bed) ? Or is it about “empowering others, to have greater impact”?

Then again, if we are looking for a new definition of leadership, women’s global health leadership should not only be about the community of women itself. As caregivers, we have a “unique contribution” to focus on vulnerable groups. How can this newly found power or voice be used to advance everyone’s? Vulnerability is not static, and we can argue that in certain settings, due to male stereotypes of strength and machismo, men do not timely access health care. We are indeed in an age of collaborative intelligence : problems cannot be dealt with by one individual with one type of knowledge / expertise and leadership alone as they are far too complex. We thus need to learn to work better in teams and be comfortable with people of different hues and backgrounds.

Furthermore, global health researchers living in the Northern part of the globe all seem to suffer from a form of schizophrenia. On the one hand, global health in the US is apparently undergraduate course choice number 1 and in fact many med school graduates expressed a wish to work in the global south during the conference. However, on the other hand, if you mount a public bus at Stanford, which is in Silicon Valley (where everyone has a car), the inequities fly right into your face. Only the true have-nots use the bus (in this case: the poor, people with disabilities, and older people without a safety net). Isn’t it a flagrant paradox ?

The next conference will take place at the London School of Hygiene and Tropical Medicine next year, and the still outstanding objective will be to really connect to the women’s grassroots organizations across the globe and show some evidence of ideas that really worked.