The first one thousand days of a child’s life—from conception till age two—are very crucial in terms of nutrition and also for the mother. With the Boko Haram insurgency in North East Nigeria forcing many to flee and now settle in IDP (Internally Displaced People) camps across the country, this report takes a look at the nutrition challenges amongst internally displaced children in some IDP camps in Nigeria’s Federal Capital Territory (FCT).

Hauwau Gana, born prematurely on October 7, 2016 lost her mother, Hadiza, to delivery complications. For two weeks she was in an incubator at the National Hospital, Abuja until she was released to her father, Baba, who signed an undertaking to pay up her medical bill within a given period. From the onset keeping up with her dietary requirements was a problem: he had three other children and made a meager income working as a commercial motorcycle operator in Masaka, one of Abuja’s unofficial IDP camps. Hauwau died on March 5 due to ill health, probably accelerated by complications from malnutrition. Her death was a rude shock for her father still mourning his wife.

The situation is not very different for the first one thousand days in the lives of other children in Abuja’s IDP camps, as was revealed during a visit to the New Kuchigoro IDP camp.

A sight that immediately hits the eyes upon entering the camp is of children eating unripe cashew or hugging branded bottles of water which now carry kunu (gruel made from guinea corn). They sip on this or their mothers are seen feeding it to them.

Ramatu Ayuba, 23, from Gwoza, Borno State, gave birth to her son on October 8th, 2016. Unlike her two previous pregnancies, where she nursed her children exclusively on breast milk, she said she’s not producing enough, “That is why I give him kunu. I don’t know why the milk doesn’t flow. Back in my village, breastfeeding was one of the things we were encouraged about during antenatal, but not here.” Ramatu knows nothing about maternal or infant health.  Her son has never been ill and has received BCG inoculation and polio immunization. To enhance her milk flow, the housewife said, “In the morning I ate kunu, I am making some beans and pasta for lunch and will have rice for dinner. When I drink tea, I put some milk in it. Then my milk flows a little and I feed my son. He hasn’t yet started eating solid foods; I mostly feed him kunu.” Ramatu said that her son would have some kunu again for dinner and didn’t have problems with bowel movement. 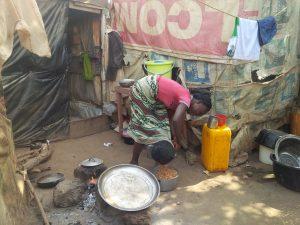 Most of Nigeria’s official and identified unofficial IDP camps are found in states like Borno, Adamawa, Yobe, Taraba, Edo and the FCT among others where measures are being taken to curb malnutrition.  But apparently they are insufficient.

IDP data collected by NGOs and UNICEF-supported teams in Yobe and Borno states, say the proportion of children with global acute malnutrition [as identified by mid-upper arm circumference (MUAC) and/or oedema] is over 80%. These initial assessments provide an indication of increasing levels of acute malnutrition.

The United Nations Office on the Coordination of Humanitarian Affairs (OCHA) estimates 300,000 children in Borno State alone will suffer from severe acute malnutrition over the next 12 months and up to 450,000 in total across Adamawa, Borno and Yobe, if adequate assistance is not received.

The situation is dire for IDP such as Maryam Amos, 25, who had her first child on March 8th, 2016, in her room, assisted by a midwife on the camp. She considers herself fortunate to have participated when NGOs gave health talks and antenatal services. “They advised us to eat a lot of banana, fish, oranges, fruits and groundnuts. When I gave birth they advised me to eat a lot of energy-giving foods, meat, vegetables and milk among others, to help my breast milk. But I can’t afford some of them, so I make do with what I have,” Maryam recalled. The Gava, Borno State indigene added, “I was advised to breastfeed my baby and what kind of foods to eat to help my breast milk. I breastfed him exclusively for 11 months and introduced artificial food as he approached 12 months. He has rejected the foods like kunu. Today, he’s eating it. He often suffers stomach ache and I’ve had to take him to the camp’s infirmary, where he was given medication. The illness isn’t completely cured yet.” Maryam, who considers her son to be healthy but for the stomachache, wants him to become a teacher, “I would like him to teach others the way of life.”

Malnutrition among IDPs has been news and despite government’s claims to be on top of the situation, the statistics are still on the high. The Borno Emergency Management Agency (BEMA) reported malnutrition-related deaths of about 450 children, ages one to five, in 28 IDP camps. BEMA said, “about 6,444 severe cases of malnutrition were recorded in the camps, 25,511 have mild to moderate symptoms.”

The significance of a child’s first one thousand days is a phenomenon many are unfamiliar with. Dr. Bamidele Omotola, a nutrition specialist at UNICEF, Abuja, shed light on the issue:  “The first one thousand days of life start from conception within the first one day of the pregnancy until the child is two years old. The pregnancy normally lasts for nine months, which is 270 days, and the two years at an average of 365 days per year multiplied by two, which is 730, plus the 270 days give the 1, 000 days that we refer to.”

Omotola said, “When a woman realizes she’s pregnant, the first thing is to go to the clinic, register for antenatal services and from there her health will be managed including the regular pills for blood because in pregnancy she needs to feed for herself and for the baby inside her. She must take what we refer to as adequate diet. She must take at least three meals and encourage herself to eat.” He described the components of an adequate diet as having animal source which is what a lot of people call protein, beans, cereals, maize, rice, millet, sorghum roots and tubers like yams, cassava, coco yam, plantain, vegetables, fruits and oils.

On how this relates to women in Ramatu’s situation he said, “Ideally, the fact that you’re IDP does not imply that your diet should be compromised. Also, knowing full well their circumstances and that they depend on what food donations they can get, whoever is making such donations must be aware of the need of such women.”

Speaking on what it portends for children being fed kunu in their first one thousand days, he said, “A child less than six months must be completely breastfed. “The mother should be supported to adequately breastfeed. After six months that child would require other foods in addition to breast milk. Those other foods must come from the varied sources. But nothing stops a mother from mixing the gruel with groundnut paste or soya beans and oils to enrich it.  “When there is no such mixture, these children are the ones who eventually become emaciated and may become severely malnourished because they won’t grow well and their mental formation is compromised and this has implications for such a child in later life. By the time a child is two years, 90 percent of his brain formation is attained.”

Malnutrition is a plague bedeviling children across Nigeria and the situation is twice as bad with internally displaced children. The cause of children suffering stunted growth has in several cases been traced to poor nutrition in their first 1, 000 days of life. “It is irreversible and associated with impaired cognitive ability and reduced school and work performance,” UNICEF says.

It is a crisis that needs immediate and clear-cut government and international intervention. Not just in Nigeria, by the way, as headlines of the past months sadly point out. With insurgency ravaging countries across the world, the humanitarian crisis is deepening by the day, provoking ripples of problems, with malnutrition and famine being on the forefront. Earlier this week, UNHCR, the UN Refugee Agency, warned that the risk of mass deaths from starvation among populations in the Horn of Africa, Yemen and Nigeria is growing.

Since Boko Haram’s seven-year terror in Nigeria, about 2.6 million have been displaced. All in all, “In northern Nigeria, seven million people are now struggling with food insecurity and need help. The situation is particularly bad in parts of Borno, Adamawa and Yobo states where by June it’s expected that some 5.1 million people will be in Integrated Food Security Phase classification levels of between 3 and 5 (worst).”

Let’s hope help doesn’t come too late for all these people in dire need.

Journalist, member of WANEL Community of Practice & IHP Correspondent Nigeria. She can be reached at vanessa.offiong@gmail.com