Back in 2014, The Lancet’s Richard Horton was asked to debate against global health at the annual conference held by the Consortium of Universities for Global Health in Washington DC. He argued some valid points to support his case. First, authors of the Global South are underrepresented on international journals. Second, the scarcity of global health departments in the Global South and the increasing number of satellite university campuses from the Global North used only as a business strategy to increase its market. Third, the consistent failure of multinational global health institutions to hold organisations accountable for gross violations of human rights. Horton concluded, as was expected from him, that global health investments were more beneficial to the Global North than the Global South. He happily acknowledged, though, that he lost the debate back then. We are not so sure. Three years later, we explore whether the case against global health still holds.

The narrative of foreign aid, for instance, may not be as benevolent as it appears. Although it is true that rich countries are giving over $120 billion USD annually in development assistance to poor countries, recent research suggests that this expenditure seems to flow back into the investors’ pockets. In 2012 developing countries received $1.3 trillion from abroad, but during the same year, $3.3 trillion flowed out of them. This is $2 trillion more than what they received. Outflows consist of debt payments, which have been increasing since 1980, and illicit capital flight through the international trade system. So, for every $1 of aid developing countries are losing $24 in net outflows. The exact numbers are perhaps controversial, but the general trend is usually not put into question.

Currently, foreign aid is not improving development or economic growth and in fact, it is having the opposite effect (see Figure 1), in many cases. Nobel prize winner Angus Deaton argues that the intrusion of foreign money is changing the relationship between governments and its people, leaving less accountable and weaker governments which further entrenches poverty around the world. Financial benefits are not the only rewards reaped by nations in the Global North; there are dozens of examples where humanitarian aid is used to support autocratic regimes, strategic allies and commercial interests. 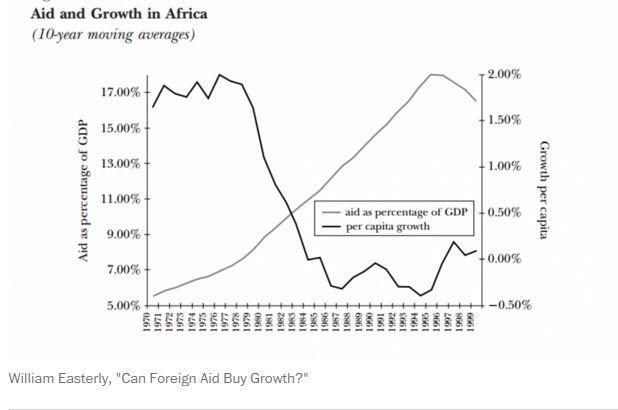 The foreign aid paradigm finds itself under scrutiny more and more as the political climate shifts. The recent rise of Donald Trump as president and his nationalist policies have been a bucket of cold water to a world confident in the U.S role as a donor. And even though actors of the Global South, like China, have been more involved in the post-2015 global health agenda some argue it is not enough and change is urgent. A shift from foreign aid as an injection of capital to poor countries to foreign aid with reducing inequality as its central aim is needed. This is the only way aid can respond to the new world dynamics of what should be the era of equality between the Global North and the Global South. If it stays the same, the Global North will continue to thrive letting the Global South alone to fend for itself.

Additionally, globalisation has had a significant role in marginalising the Global South, by worsening wealth inequality and perpetuating the cycle of poverty that the majority of the world’s population experience.  A study published by the UN in 2013 highlighted the alarming statistics that more people in the world have access to a mobile phone than a working toilet. In 2010, 1.1 million people across the world still practised open defecation (15% of the global population), yet the Global North (or at least powerful actors in the Global North) is/are still getting richer. Large commercial companies control the global markets and profit from the needs of the poor. An example of this is the tea plantations in Assam, India, where the global tea market, including companies such as Starbucks, Tetley and Twinings, are contributing to the infringement of the human rights of workers on the plantations. Due to poor living conditions and lack of adequate antenatal care, Upper Assam has the highest maternal mortality rate in India, over double the national average.

The globalisation of the tobacco industry is another example of harm to the Global South. Tobacco companies are facing reducing smoking rates in the global North, due to increased knowledge and high priority anti-smoking campaigns, and have increasingly turned their attention to the Global South, taking advantage of low anti-tobacco measures and effectively poisoning and bankrupting millions of vulnerable people. It is time we questioned the ethics of the activities of large global businesses, including the tobacco and fast food industries, within developing countries, and encourage the development of sustainable and ethical local businesses and economies in order to benefit those who are most vulnerable.

Three years on from Horton’s debate, we believe that global health is becoming less about improving health and achieving health equity, and more of a pretext to help with the Global North’s agenda. It has become almost a marketing strategy to create profit for the rich while appearing to be altruistic in the public eye, all while denying the most vulnerable a real chance for development and increasing the North-South gap. The world’s eight richest people now control the same wealth as the poorest fifty percent of the world’s population, a total of 3.6 billion people. As the title of a recent Oxfam report states, ‘It’s time to build a human economy that benefits everyone, not just the privileged few’ and this, we believe, is the key to achieving Global Health.

Laura and Rachel are students in the Global Health plan of the Master of Public Health at the University of Queensland in Brisbane, Australia. If you want to discuss their blog with them, their email accounts are l.tapiamunguia@uq.net.au & r.wilkie@uq.net.au