On May 23rd, 2017, Dr. Tedros Adhanom Ghebreyesus from Ethiopia was elected as the new Director-General (DG) of the World Health Organization (WHO). On July 1, 2017, Dr. Tedros began his (first) five-year term at the helm of WHO. Dr. Tedros is the first non-medical doctor to lead the WHO and received strong support from a majority of developing nations and unanimous support from African Union countries, securing his victory in the election. As stated by Ethiopia’s ambassador to the UN, Dr. Tedros’ win was “a big victory for Africa and the developing world.” It also provided him with a lot of political capital. Dr. Tedros’ extensive background as a staunch advocate for health includes serving as the Federal Minister of Health in Ethiopia (2005 – 2012), Chair of The Global Fund to fight AIDS, Tuberculosis, and Malaria (2009 – 2011), and as the Minister of Foreign Affairs in Ethiopia (2012 – 2016). Dr. Tedros’ extensive career has turned him into an effective political leader and diplomat. Therefore, we believe Dr. Tedros will offer a fresh perspective and renew confidence in the WHO, once again establishing it as a global organization at the centre of the global health community, as well as advancing the Global South (but not only the Global South) through its work.

Since his election, Dr. Tedros has already proven to be a skilled global health diplomat. He has engaged with political leaders worldwide regarding the goals of his platform and has brought global health to the forefront of political discussion, most recently at the United Nations General Assembly this year. In July, Dr. Tedros spoke among world leaders at the G20 summit in Berlin regarding the risks that health emergencies pose to global health security and the importance of universal health coverage (UHC). He outlined his plans of securing financial resources to prevent and manage emergency outbreaks, coordinating countries to promote UHC, and prioritizing research and development with an emphasis on antimicrobial resistance. Dr. Tedros also already demonstrated his political savvy and network by collaborating with the leaders of China, and negotiated to increase their financial contribution to the WHO with an additional $20 million in the next 5 years. The WHO has proposed a partnership with China to invest in ‘Belt and Road Initiative’ countries and other countries most vulnerable to infectious diseases. This collaboration aims to increase disease surveillance, improve emergency preparedness, and provide long term prevention.

Dr. Tedros has also stated his intention to address the issues outlined in his campaign platform through the lens of Sustainable Development Goals, with a focus on achieving UHC. Within this particular goal, his main priorities include providing access to “essential healthcare services”, including vaccinations, and access to medicine for all people. Dr. Tedros aims to provide these quality healthcare services effectively while maintaining affordability and with safety in mind. Dr. Tedros’ goal, “to keep the world safe, improve health and serve the vulnerable” displays both his background as a political figure and skilled diplomat, as well as a health minister from a low-income country. In keeping with current affairs, Dr. Tedros recognizes that environmental factors contribute to a range of diseases. Subsequently, he plans to increase funds and resources dedicated to combatting these environmental changes and promotes the sustainability of low-carbon approaches within the health sector. In a recent interview with TIME magazine, Dr. Tedros argues that by promoting universal health care, poverty will be reduced in each country. Thus, each country will be able to contribute to economic growth by creating new jobs and building a healthier population. During his campaign, Dr. Tedros emphasized the importance of promoting the WHO as an organization that puts human rights and gender equity at the forefront of its public health programs. He has been noted for his support of abortion and LGBT rights in the face of widespread discrimination in Africa, which could help him win the support of AIDS advocacy organizations. In addition, Dr. Tedros has emphasized his plans to transform the WHO into a more transparent and accountable organization.

As evidence of his goal for transparency with global citizens, Dr. Tedros is an active user of social media, with a Twitter following of 225,000 and counting. He believes that social media is a valuable resource to spread the word of public health. He’s a bit more cautious when it comes to (normal) media and the journalism industry, though. Perhaps unsurprisingly, the biggest controversy surrounding his push for transparency involves his own country. Ethiopia is deemed one of the worst countries worldwide to be in the journalism industry. In a recent interview with Foreign Affairs, Dr. Tedros was confronted with this issue and succinctly stated that as long as journalists follow the laws in place in that country, they will not be punished for speaking their mind. Not everybody appreciated that response, certainly not in Western countries.  For Dr. Tedros to be seen as an ethical, transparent and conscientious leader of the WHO, he will need to emphasize his support for changes that strengthen journalism around the world (including investigative journalism), ultimately holding institutions and government bodies accountable for their actions, while keeping citizens informed to re-establish transparency and confidence in the WHO. The UHC movement also requires no less.

Other concerns regarding Dr. Tedros’ leadership as the newly elected DG of the WHO have been raised, with the majority of opposition coming from Ethiopians. Dr. Tedros has been criticized for his affiliation with the Tigray People Liberation Front, an Ethiopian political party that has been in power for the past 25 years and is notorious for its political repression and violation of human rights. Dr. Tedros’ leadership in the current cholera crises around the globe may also appear vulnerable as accusations have been made surrounding his involvement in covering up the cholera epidemics in Ethiopia, when he was Minister of Health. So far though, WHO’s (updated) cholera policy seems to be going in the right direction. Additionally, his close relationship with an authoritarian country such as China may not be seen as just an asset but also as a liability in certain circumstances.  Dr. Tedros will have to find a good balance in his dealings with the Chinese leadership. Moreover, as a leader representing the Global South, there are concerns that priorities of the WHO will now shift disproportionately toward the needs of the Global South instead of displaying an all-encompassing approach to global health. Some may even argue he was elected as a representative of the Global South rather than for the goals he sets forth as the next DG of the WHO. However, just a few months in power, he has already demonstrated to be an unbiased representative of health with his increased attention for non-communicable disease prevention.

In short, while some of these concerns may be valid, they do not outweigh the overwhelming amount of support Dr. Tedros received during his election. If Dr. Tedros successfully achieves the goals of his platform, the WHO could transform in a way that would contradict many of the arguments against him. Arguments that the WHO is a means of carrying out the agenda of the Global North would no longer bear any weight, for example, if priorities of the Global South are being addressed in a sustainable manner.  Dr. Tedros plans to improve the transparency of the WHO by encouraging collaboration between project stakeholders which could lead to better accountability of funds and resources. Dr. Tedros’ vision to provide equity of health resources across social sectors aligns with the WHO’s commitment to provide the highest possible standard of health worldwide.

Dr. Tedros’ political acumen may offer a fresh perspective to the WHO by engaging political leaders and building on countries’ infrastructures to strengthen global health as a whole. The greatly anticipated turn of the WHO under the leadership of Dr. Tedros for #HealthForAll is now underway, best of luck to Dr. Tedros! 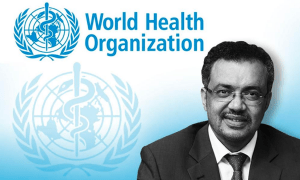