Subscribe
Home > blogs > Health in the SDGs and the 13th GPW: Can WHO break out of the chokehold?
blog

Health in the SDGs and the 13th GPW: Can WHO break out of the chokehold?

Last month was a busy month in the world of global health. The spotlight was on WHO’s 142nd Executive Board meeting, and the thirteenth General Programme of Work (GPW) for 2019-2023, to be formally approved at this year’s (71st) World Health Assembly, if all goes according to plan. The Prince Mahidol Award Conference (PMAC) had its annual gathering on policy-related health issues in Bangkok, focusing this year on the threats of emerging infectious diseases and how to deal with them in a multi-sectoral way. The World Economic Forum’s annual meeting in Davos highlighted the need for “reasserting shared interest” in rethinking its vision for economic growth. One thing is clear: intersectoral thinking is a given—you just can’t have one issue without its intersecting with another, even in the Oxfam aid scandal (but I’ll spare you my rant on sexism, colonialism, racism, orientalist paternalism, lack of professionalism, and human rights abuse—at least for this particular post). It’s for a reason that efforts are being made to revive Alma Ata (including its multi-sectoral vision), 40 years later.

Focusing on the 13th GPW then, the document reflects to a considerable extent the vision of the new WHO Director General. The content is more or less in line with Dr Tedros’ (and WHO’s) vision to “promote health, keep the world safe, serve the vulnerable”. Not unexpectedly, the GPW draws from the lessons of the Ebola crisis, new and ongoing conflicts (and resulting displacement/migration), and the rise of NCDs, among other global health (policy) issues. And of course the Sustainable Development Goals (SDGs) are inescapable, at least for UN organisations—the WHO bases this iteration of the GPW on the SDG agenda, positing that although there is only one explicit goal for health, the overarching goal of SDG3 (i.e. ensuring healthy lives and promoting well-being for all at all ages), each of the other goals has health embedded in it. This is the foundation of the WHO’s work.

Poverty, conflict, and climate are highlighted on the agenda in particular, but the focal point is Universal Health Coverage (UHC), which, as Dr. Tedros astutely says, is “the best investment in a safer world”. Succinct and politically smart, really. Economic growth and health security are what powerful member states seem to be most concerned with, rather than directly addressing the health needs of the world’s 7.5 billion people. The priority of the GPW is what high level policy makers are referring to as “the triple billion”—that is an additional one billion people under Universal Health Coverage; an additional one billion people better protected in health emergencies; and finally, one billion more people enjoying better health. How this translates at the operational level is the key question here. 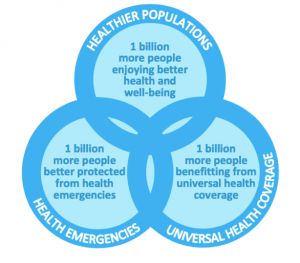 Two of the strategic goals and priorities are fraught with funding issues. Assessed  contributions of WHO member states continue to be stuck at a downright disappointing level, in the light of the many global health challenges WHO faces, and in addition, in recent decades more and more of the money has been allocated by those states (and non-states—like philanthropic and other organizations) leveraging their power to earmark areas of focus, creating a donor chokehold. The quantity and quality of funding (the latter being the key problem according to Dr. Tedros) creates a tension in the WHO’s ability (and room for manoeuvre) to carry out its mandate and responsibilities—will health systems have adequate resources for strengthening, ensuring rights and social protection? Or will attention (because of specific pressures from powerful member states, foundations, and corporations) veer toward global health security, the elephant in the SDG room? Again, investment is the operational term to attract funding for better health for everyone.

WHO is strong in its values, reassuring us in the GPW that it will not shy away from taking a stronger normative stance (as is expected from the organisation), and sets out an impact framework identifying clearly what needs to be done. Some months ago, WHO even came up with an SDG Health Price Tag. With the existing capacity and technical know-how in the world, successful implementation of this GPW as well as the SDGs in general is within reach. But fulfilling the purpose of “reaching the highest attainable standard of health for all” remains a challenge in a political and economic context where the champions of industry purport to map global change in efforts toward geostrategic collaboration. Such initiatives repackage the same old policies of “growth” through (largely imaginary) trickle-down processes and deregulated economies that have resulted in disastrous effects on people and the planet (except, perhaps for the 1%).

In many parts of the world, we’re now seeing a backlash against neoliberal globalization, coming from both the political left and right. Consequently, those of us who work in global health must contend with an unpredictable international environment where doing development differently or adopting a new economic model for the real transformation of structures and institutions for “Health for All” would mean a radical and uncomfortable shift in the way we do development and conceive of growth.