Subscribe
Home > blogs > Health & human rights in Nicaragua: which side are you on?
blog

Health & human rights in Nicaragua: which side are you on?

While most people living in the Americas these days wake up to watch soccer matches of their all-time favorite country teams (Argentina, Brazil, Mexico…), we Nicaraguans wake up to count the dead and the missing from the night before. Living under siege has become the ‘new normal’ since a nation-wide social uprising started on April 18th. There’s no such thing anymore as night life since armed paramilitaries and masked police officers roam the streets and terrorize neighborhoods as soon as the sun goes down. In what the Nicaraguan Pro Human Rights Association (ANPDH) calls “an undeclared state of siege”, until June 25th were registered 285 deaths, at least 1,500 injured of which 46 with long-term sequelae, and more than 156 enforced disappearances.

Three days earlier, on June 22nd, the Inter-American Commission on Human Rights (IACHR) presented its report ‘Severe human rights violation in the context of social protests in Nicaragua’ to the permanent council of the Organization of American States. The report – shamelessly turned down by Ortega’s Minister of Foreign Affairs as “subjective, prejudiced and notoriously biased” – gives a detailed account of “the Nicaraguan government’s repressive response”, including “murders, likely extrajudicial executions, mistreatment, likely acts of torture and arbitrary detentions”. It adds one more concern – echoing what Amnesty International already highlighted in its May 29th report ‘Shoot to kill – Nicaragua’s strategy to repress protest’: “the violation of the right to health and (…) the denial of medical attention”.

There have indeed been numerous testimonies of denial of medical attention to injured civilians in public hospitals. The Minister of Health herself, Dr. Sonia Castro, had threatened the medical staff with expulsion if treatment was provided to students and protesters. Once this became widely known, she of course denied so while still describing the care-seeking of the wounded as “attacks and forceful access to hospitals”, which would hamper medical attention to poor infants with diarrhea. Attacks around hospitals are indeed documented, but by paramilitary forces and against wounded protesters seeking care. The same government-loyal paramilitaries systematically hampered the humanitarian work of Red Cross staff, paramedics, firefighters, doctors, medical students and volunteers. When improvised health posts were set up in houses, schools and churches, volunteers were threatened, and some of them kidnapped. To make the picture of terror complete, Ministry of Health ambulances were used to mobilize shock troops and police forces to attack neighborhoods where roadblocks had been put up by the population for protection. Autopsies have been interfered and corpses with evident signs of torture have been categorized as ´death by natural causes´.

One of the most heartbreaking stories was that of Álvaro Conrado. On April 20th while carrying water to protesting students, the 15-year old boy was shot in the throat. Bleeding to death – his last words were “It hurts to breathe” – he was denied access to the social security Cruz Azul hospital, administered by a government doctor-politician who is also president of the National Assembly. Then taken to the private Baptist hospital, the boy died while undergoing surgery.

While the death count and the denial of human rights get worse day by day, very little concern and condemnation has been shown by the international community. The Latin American and the Caribbean Medical Confederation (Confemel) and the World Medical Association (WMA) have been the exception. Confemel raised its concern for the “scandalous tolerance of the international community” and the WMA condemned “the collapse of the public health care system in Nicaragua and the breakdown of medical ethics and human rights in the country”.

Adding insult to injury, the Ortega-Murillo regime blatantly denies the on-going human rights violations and maintains its Orwellian discourse of “war is peace, freedom is slavery and ignorance is strength” to convince the handful of Nicaraguans still supporting them.

Our diaspora has started voicing indignation for the indifference of some international entities. Last Tuesday, a man interrupted a PAHO meeting to question its Director Dr. Carissa Etienne’s silence at the crisis that has affected adversely the Nicaraguan health system. But not much has changed. We understand many crises are going on in the world at this moment, but still. How many more deaths do we have to show?

So you, colleagues and friends, will you help us to restore at least our right to health? Or would you rather prefer an ‘I really don’t care’ jacket? Which side are you on? 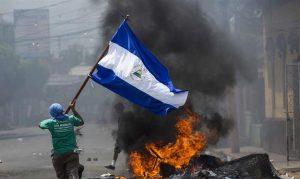