Getting our priorities straight

“We don’t want anything. We don’t need a single rupee or tea but only do something on water and give us drinking water”.

While conducting an implementation research study in a marginalized area of northern India, on the implementation of guidelines to support village health, sanitation and nutrition committees (2013),  day after day, interview after interview, people explained to us how desperate they were for an adequate supply of clean drinking water. Yet, day after day, interview after interview, we kept exploring and focusing on other issues.

Yes, we took note of the urgent need for water. But as we had “a job to do” as researchers,  we moved on to other topics. Our study had to cover a lot of ground. As mentioned, we were there to learn about village health, sanitation, and nutrition committees, which were primarily set up to take collective local health action (such as organizing village health education or cleaning events) and monitor the services offered by government pre-schools and clinics.

We weren’t expecting to find such severe water shortages and terrible drinking water quality. Much of the water in this region of north India was either too salty or too high in fluoride content to be consumed. Women explained that it ruined the tea when mixed with milk. The shortage and change in water quality also affected crop cultivation and changed the pattern of production. People could only access potable water through a few deep bore wells, and the bore wells could only be used when the irregular electricity became available.

Insufficient water and poor water quality were the single most pressing issues for all the villages we visited. Yet the health committee intervention was not designed to engage in the large-scale infrastructure projects required to address this problem. Buying reverse osmosis filters, digging new bore wells, installing new motors, building new tanks, and setting up piped water systems were all (often) beyond the capacity of the health committee. Many village committees tried to address their water issues by writing request letters to the authorities. However without access to sufficient funding, and without the ability to apply political pressure, few committees made headway—at least during our one-and-a-half year research period. 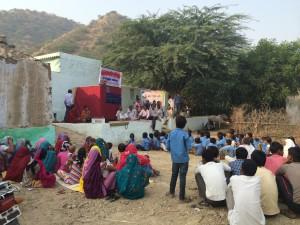 What do you – researchers – do when the community’s expressed priority does not perfectly align with your public health program? In many cases, including ours, a public health intervention seeks to address important local challenges but often has little to contribute towards solving the most pressing ones, such as water shortages or unemployment.

Ideally, community-oriented public health will support communities in identifying and solving local problems. But reality is rarely like this. Many projects have a pre-determined focus. Many funders want to use evidence-based public health approaches to generate a measurable reduction in mortality and morbidity, within a fixed timeframe and fixed budget. A hand washing promotion intervention is a feasible way to achieve this goal. Conversely, an expensive, intensive and multi-sectorial attempt to bring potable water to a drought ridden fluoride belt is usually not what they have in mind.

The reason that so many public health interventions focus on valuable but secondary issues in people’s lives is that we lack the political clout or consensus to solve the bigger social problems: rampant financial inequality and unfair distribution of scarce resources. These huge, seemingly intractable, issues are the primary social determinants of health. We need to emphasize cross-sector collaboration and long-term funding for initiatives that create health-enabling environments—rather than short-term disease-specific or behaviour change oriented interventions.

The United Nation’s Sustainable Development Goals (SDGs) may help create such a push. These goals present an opportunity to renew our vision for development. Countries must set agendas, allocate finances, partner across ministries and implement development projects that are oriented around the “causes of the causes” of ill health. Just this week, for example, it was reported that  at least two-thirds of the global population, over 4 billion people, live with severe water scarcity for at least one month every year.

It’s uncomfortable to learn that a remote village is desperate for water, and then try to convince community members to get excited about joining a health committee that is not equipped to solve their water problems. Perhaps this discomfort should be a reminder to refocus on the big stuff. There will always be a tension between specific, short-term interventions (encouraging hand washing behaviour, improving health worker training and support) and broad, long term interventions (water infrastructure development, labour rights advocacy, increasing the money available for public services). Ideally we can integrate these approaches, for example through helping village health committees in India gain the power to better advocate for their water needs.

Let’s remember that our greatest work lies in addressing the broad social determinants of health. Short and medium term interventions matter too—but we need to ensure that public health remains oriented around the true priorities, even though they are the most difficult.

They are so for a reason.