From Brain Drain to Brain Gain? A few hints from the Global South

The 2017 Global Evidence Summit was recently held in Cape Town, South Africa. From what we heard, it was a fascinating conference. Too bad we weren’t there. More importantly however, in spite of the organizers’ intention to be highly inclusive and diverse, and participants from 77 countries, a number of countries were not represented, showing that still more needs to be done to ensure engagement of all countries in such global discussions. This also remains a challenge for the upcoming 5th Global Symposium on Health Systems Research (HSR2018) in Liverpool, for example.

Although health policy and systems research has shown signs of steady improvement, the number of locally-led LMIC publications remains rather low when compared to those steered from the global North. This was also emphasized during HSR2016 in Vancouver,  where it was noted that research contributed (too) little to health in LMICs because it often matched poorly with needs in the global South, was still too dominated by researchers from the North, and often had a narrow biomedical focus. The dearth of locally-led studies (see Figures 1 and 2) may push LMICs to rely on “best practices” from other countries, when we know that one country’s initiative may not necessarily work in another, and even if every single report stresses nowadays that “one size fits all” and other “blueprints” won’t do it. True, the picture is slowly improving, and ‘embedded researchers’ from LMICs are increasingly getting their research out, but by and large, too many countries (and even regions) are still underrepresented, both in the literature and at global conferences. The Global Evidence summit was just the latest example.

In line with the global trend towards partnership, we believe that the Global North should increasingly become collaborators for change. By the way, such collaboration should also push countries in the Global South to be more open and transparent – and perhaps less bureaucratic as well. For example, in our experience, data are sometimes not even shared with people from the same country who are working or studying in the Global North. The main fear seems to be that the flaws of the current government could be exposed. In addition, researchers often face substantial bureaucratic hurdles.

Figure 1. Relative comparison of contribution to health policy and systems research versus all PubMed publications by authors from each country per low- and middle-income country income group 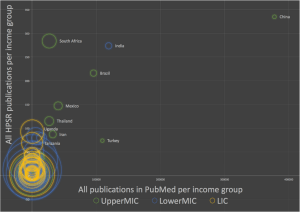 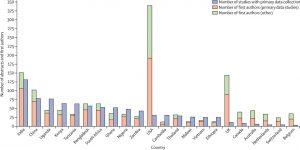 As we strive to strengthen collaboration between the Global North and South, we call for two things in particular:

As countries strive to achieve UHC – which is currently taking centre stage, as you might have noticed – it will be key to integrate UHC focused programmes and initiatives with country priorities, whether NCDs, HIV/TB, or even other programs that are not directly health related such as eradicating poverty and hunger. We believe that the integration of initiatives can also optimize the limited pool of research funding and capacity in LMICs and produce, in turn, more high impact and quality findings – focusing on “quality” and not simply on “quantity” of research outputs. This, however, is easier said than done, which is why we call not just on donors in the Global North but also on countries in the Global South to invest ( a lot more) in building capacity for research.  Such integration of initiatives will also require countries to focus less on donor interests, but more on country-identified priorities. Global reports from the SDG era and new “catalysing” global health initiatives all proclaim that the countries themselves should be in the driving seat, so it is time we live up to that and try to make it happen.

For evidence to be generated and rooted from LMIC priorities and concerns, the Global North should not only think in terms of transferring skills to LMICs or ensuring the latter’s adoption of interventions conceived in the North, but they should also learn from LMICs about their own (health system) constraints, as well as innovations and strengths that can be tapped to overcome complex issues in their own (Northern) settings. Reverse innovation and learning shouldn’t remain empty words. This also means that poor countries in the Global South should not only be considered as donor-dependent countries, but also as rich sources of evidence, requiring appreciation of country-specific contexts. Only then, they’ll really become “partners”, and will we have entered the SDG health era. Thus, researchers from the Global North must also invest in immersing themselves in the realities and complexities of the Global South before making sometimes sweeping assertions in their research. In other words, Global North researchers may need to spend a heck of a lot more time in the South, if they are going to draft recommendations. Or more bluntly: “capacity building” of Northern researchers who write about the South should also be a priority.

As mentioned above, the Global South should make research a priority, which requires substantial investment in their local researchers, research institutes and think tanks. According to a UNESCO report, the USA, China, EU and Japan account for nearly 77% of global investment in R&D. As a result of limited investment in LMIC, only 1.3% of the world share of researchers in 2013 came from low income countries, while 6.4% belonged to lower middle and 28% to upper-middle income countries.

Most “global” conferences are (still) held in countries that are too expensive for junior researchers or practitioners from LMICs. Visa requests can be a painful (expensive and tedious) process, and in these “assertive nationalism” times that isn’t likely to get any better any time soon. In short, early-career researchers need more support from organizers of international summits, symposiums and conferences to both attend and actively participate (and not only to turn the conferences into more lively affairs!)

Furthermore, in quite a few countries in the Global South, research funding is not always based on competence and relevance of the researcher’s role. Often, the position in government matters more, and researchers from private institutions may have less chances to apply to certain calls. It is also common that Global South governments send people in senior leadership roles to international conferences. Again and again. Even local researchers who are working directly with data may not be selected for funding or enjoy sufficient support.

Like in the Global North, junior or private researchers suffer restrictions, but due to their limited number we think they can act as an important bridge between organizations, and  they might eventually also contribute to the health sector in their country as part of the government or a public university. But even if they do not, just like any other professional, they need to expand their networks and improve their skills. Otherwise, their research may stagnate and become stale. It is thus vital that they also have the opportunity to attend global conferences.

Early-career researchers need to raise their voices in their own countries while becoming globally involved. A pooled registration fund could perhaps help to progressively offer a special discount or even a fee waiver to junior experts from the Global South. Anyhow, we are sure health economists can come up with a more equitable “scheme” than the current one!

Some may fear that emphasizing (more) South-North exchanges could result in further brain drain or, at least, brainwashing. But, as proposed here, we tend to see this differently, as an opportunity rather – more in particular as a way to improve mutual understanding.

Our plea is simpler said than done: achieving change in health systems requires active commitment and participation from both the Global North and South. A global symposium on health systems research is precisely the place to discuss how this can be achieved. In fact, ideally, in the months ahead, everything should be done so that participation will be as inclusive and diverse as possible in Liverpool.

As HSR2018 launches the call for abstracts this month, now is the time to boost engagement of researchers and other global health practitioners from the Global South, especially from countries and regions that have been underrepresented since Montreux.

Erlyn Macarayan was part of the 2014 Emerging Voices program. She is interested in the areas of health systems, epidemiology, and infectious diseases.

Irene Torres, PhD, researches health promotion and health education, rural health and primary health care. She is board member of the Ecuadorian Society of Public Health and Fundacion Octaedro.